“Shop and frisk” became part of the vernacular this year when three African-American shoppers were detained after making expensive purchases. 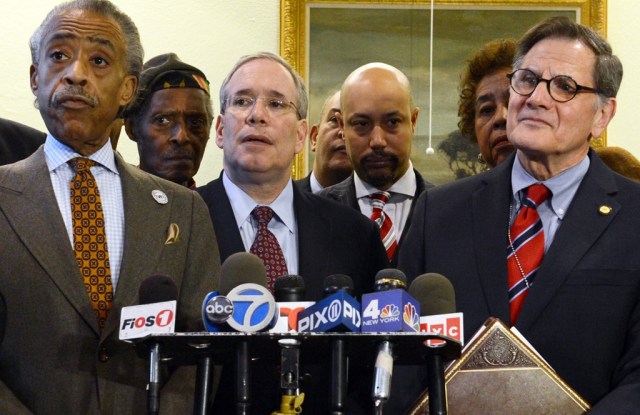 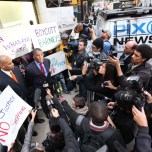 “Shop and frisk” became part of the vernacular this year when three African-American shoppers were detained by the New York Police Department after making expensive purchases at Barneys New York and Macy’s — setting off a civil rights firestorm in New York City leading up to the holiday shopping season.

Trayon Christian, 19, filed a discrimination lawsuit in state Supreme Court in Manhattan against Barneys, the city and the NYPD. According to the lawsuit, Christian, shopping at Barneys on April 29, bought a $349 Ferragamo belt. After leaving the store, he allegedly was accosted by undercover NYPD officers who said someone at the store had raised concerns about the sale. Kayla Phillips, 21, claimed she had a similar experience after purchasing a $2,500 Céline handbag at Barneys in February, and filed a $5 million notice of claim against the NYPD. Robert Brown, an actor who stars in the HBO series “Treme,” filed a lawsuit against Macy’s after he was stopped by the NYPD in June and paraded though Macy’s flagship after purchasing a $1,350 gold Movado watch for his mother.

“We’re not going to live in a town where our money is considered suspect, and everybody else’s is respected,” said Rev. Al Sharpton at a rally in Harlem. He added that young African-Americans save their money for things they want to buy: “They take a lot of money and go to your store, and are treated like suspects.” He said, “We’ve gone from ‘stop and frisk,’ to ‘shop and frisk.”’

Shawn “Jay Z” Carter was brought into the thick of the action because he collaborated with Barneys on an exclusive holiday collection called “A New York Holiday.” Carter drew criticism for going ahead with the BNY SCC Gallery and Collection, and there was an online petition asking him to withdraw from the deal. Carter decided to go forward with the collection, provided he was given a “leadership role” in addressing racial profiling issues.

The retailer and the entertainer also agreed to donate 100 percent of the proceeds to the Shawn Carter Foundation, which provides educational opportunities to young people facing socioeconomic hardship. In addition, when the collection launched on Nov. 20, Barneys donated 10 percent of all retail sales from Barneys stores in the U.S. and barneys.com, with a guarantee of raising at least $1 million for the foundation.

“I am in a unique position to use my voice to affect change to this disturbing issue. The easy position would have been to walk away and leave policy making to others hoping that someone addresses the problem. I will not leave the outcome to others,” Carter said on his Web site. He reportedly joined Barneys’ internal advisory council to deal with racial profiling and was involved in creating new guidelines for the way the retailer interacts with the NYPD.

Throughout the controversy, both Barneys and Macy’s said their employees were not involved in detaining the customers. Barneys retained attorney Michael Yaki, a civil rights expert who serves on the U.S. Commission on Civil Rights, who concluded that Barneys’ employees did not “request, require, nor initiate” any police action against the two African-American customers who claimed they were wrongly accused of credit card fraud. Yaki also found that Barneys has a formal antiracial profiling policy.

At a press conference at the National Action Network’s Harlem headquarters, Mark Lee, chief executive officer of Barneys, said: “Barneys New York has zero tolerance for any form of discrimination and we are committed to treating everyone who comes into our stores with respect and dignity.”

A City Hall hearing was held on Nov. 20, and representatives from Barneys, Macy’s and the NYPD were not present, although the retailers did submit written testimony. Those who testified included Donna Lieberman, executive director of the New York Civil Liberties Union, and Patricia L. Gatling, commissioner and chair of the New York City Commission on Human Rights. Gatling sent letters to 17 ceo’s of the largest retailers that do business in New York on Nov. 13, asking about their loss-prevention policies, their relationship with the police and thefts that have occurred. She set a deadline of Nov. 22 for the retailers to respond.

Macy’s and Bloomingdale’s didn’t respond by Nov. 27 and were subpoenaed. Macy’s filed objections regarding the subpoena, and the commission had 30 days to consider the objections and make a decision. Still, the commission set a Dec. 10 deadline to receive Macy’s documents. The company submitted some materials Dec. 10 and was expected to meet with the commission on Dec. 13 with additional material.

Meantime, the Attorney General’s office received information from Barneys and Macy’s and started to call witnesses. Its investigation is “active and ongoing,” according to a spokesman.

“It’s just the start of a dialogue, and we’re forming a task force that will be charged with working on industry-wide policies and standards,” said Foy.

Barneys issued an internal memo to its store security staff on Nov. 26 saying it will begin monitoring the police as they monitor shoppers at its Manhattan flagship.

On Dec. 9, Sharpton held a press briefing and said that the retail task force had hammered out a Consumers’ Bill of Rights, which would be posted on participating stores’ Web sites and in-store, and on the Retail Council of New York’s Web site. The Bill of Rights states, “Profiling is an unacceptable practice and will not be tolerated.” It also says employees “who violate the company’s prohibition on profiling will be subject to disciplinary action, up to and including termination of employment.”

Sharpton said he was looking forward to sitting down and discussing these issues in the coming days with incoming Police Commissioner William Bratton.