Rachel Shechtman Out at Macy’s

Her departure reflects a shift in the department store's priorities due to COVID-19.

Shechtman achieved industry fame as the founder of the experiential Story retail concept, which Macy’s bought two years ago. She was also involved in developing Macy’s latest concept, Market by Macy’s, a 20,000-square-foot specialty store that made its debut in Southlake, Tex., last February with a “curated” offering.

“Based on today’s economic realities, we are pausing our new store format work to focus on our existing store and omnichannel footprint. As part of this transition, Rachel Shechtman will be leaving Macy’s,” a spokeswoman told WWD on Friday.

“Rachel has been an outstanding member of the executive team, bringing us fresh perspective and her unique approach to experiential retail. We know she will continue to be an important voice and vision in retail,” the spokeswoman added.

Macy’s Inc. has been aggressively streamlining to conserve cash and navigate its way through the pandemic. On Thursday, the $24 billion retailer disclosed it was cutting 3,900 corporate and management jobs to save $365 million this year and about $630 million in expenses on an annual basis going forward. Additionally, the company has reduced staffing across its stores portfolio, supply chain and customer support network, which it plans to adjust as sales recover.

Shechtman’s departure does not signal the end of Story at Macy’s, though the format has evolved. “Story has a role to play in our gifting strategy,” the spokeswoman said. “The existing Story locations have reopened in their current format. We see great potential, and the format and merchandising will evolve with our gifting strategy.”

Story has been among the most touted elements of the department store’s innovation agenda, along with the rollout of the Backstage in-store and freestanding off-price format. Story was launched at Macy’s Herald Square flagship and 35 branch stores in 15 states in April 2019 after the corporation purchased the business in 2018 from Shechtman and named her brand experience officer.

For the inaugural Story at Macy’s, the theme was “Color” and about 400 products from some 70 vendors, primarily small ones, were displayed. While Color got mixed reviews, the second installation, “Outdoors,” seemed more sophisticated and included partnerships with Dick’s Sporting Goods and Miracle-Gro to carry products Macy’s typically doesn’t sell.

From the get-go, Macy’s chairman and chief executive officer Jeff Gennette said Story would not “move the needle” at the retailer, in terms of driving revenues. But it would nurture more of a culture of risk-taking and  innovation and draw new products and new partnerships to the store.

Ten months after the launch, Macy’s closed 16 of the Story shops, which wasn’t a good sign for the future of the concept. But Macy’s at that time said the decision to reduce the locations followed 10 months of testing and learning since the launch. “The goal was to spend the first year understanding customers and the new brand so that we could learn, iterate and innovate,” Macy’s said at the time.

Story shops inside Macy’s average 1,500 square feet and have customized, flexible fixtures. Similar to the original Story store, which was at 144 10th Avenue in the Chelsea section of Manhattan, they change their merchandise theme, products and decor every two months or so. Throughout its history, Story has presented regularly changing themes such as Made in America, wellness, or locally made products that become the basis for often offbeat assortments, collaborations and events. 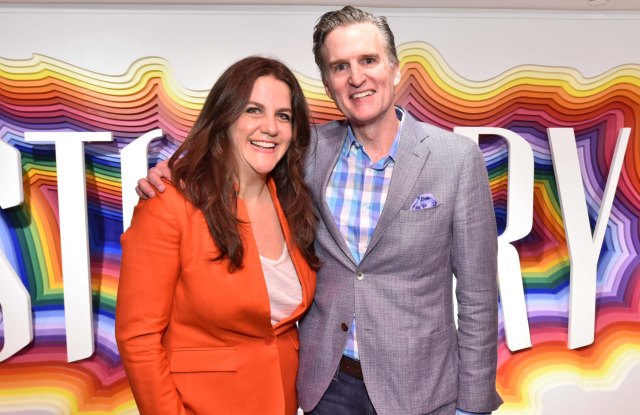 Rachel Shechtman and Jeff Gennette, at the launch of Story at Macys.  Courtesy Photo