The label's uptown flagship —?and sixth store in Manhattan —?officially debuts on Saturday. 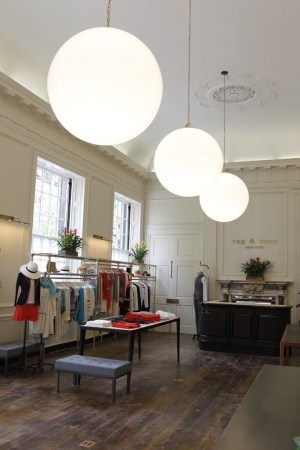 “Look at our flag. I hope Ralph can see it from his store down there,” said Rag & Bone designer David Neville Wednesday morning, standing outside his new Madison Avenue boutique at 73rd Street, just a block away from the gold standard of uptown retail, Ralph Lauren’s Rhinelander Mansion.

When Rag & Bone’s uptown flagship — the label’s sixth store in Manhattan, and ninth overall — officially opens Saturday, it will be a proud moment for Neville and his design partner Marcus Wainwright. “Madison Avenue is something you hear about when you don’t even know New York,” said Neville.

The building itself, 909 Madison, is impressive real estate. At 9,000 square feet, the four-story red brick Federal-style town house is three times the size of any of Rag & Bone’s other stores, which include New York outposts in the West Village, SoHo, NoLIta and the Upper West Side, as well as locales in Boston, Washington, D.C., and Tokyo, with a London store slated to open this summer. Neville had his eye on the Madison spot, which was previously home to a Chase bank until about 18 months ago. When it initially came on the market, a big brand immediately swooped in, but that deal fell through and Neville and Wainwright seized the opportunity. For the most part, they gutted the place, minus a cement-reinforced teller’s desk on the first floor that now serves as the cash wrap, and the walk-in iron vault on the lower level, which will be used for purely decorative effect among the women’s fitting rooms. “We don’t want anyone getting locked in there,” said Neville.

Renovations for such a vast space are being completed in phases, beginning with the ground floor and the lower level, which will be devoted to women’s, accessories and dressing rooms. “The challenge for the moment is getting open, because we’re paying,” said Neville. The second floor currently houses the stockroom, but will become a dedicated men’s department this summer. Until then, a small selection of men’s merchandise will be displayed on the ground floor.

Crown moldings, hardwood floors, brass fixtures and black lacquer paint are key to the Rag & Bone aesthetic, and here it will be accented by velvet furnishings and curtains. The interiors are designed in-house with Neville and Wainwright at the helm. Still to come is an old-fashioned elevator that will be operated by a bellman.

Founded in 2002, Rag & Bone launched men’s in spring 2004, with a full women’s collection by fall 2005 and accessories in 2007. Andrew Rosen took a stake in the contemporary label in 2006 and fostered a retail growth strategy. “We’ve dreamed about [Madison],” said Neville. “Actually being able to make the economics of it happen is something we’ve been trying to build our company toward. We’re lucky enough to make this step now.”