The pop-up will be followed by a permanent Los Angeles store in October and next year, New York.

A look from Rails' women's collection.

Rails, the clothing company that began turning heads with a workhorse button-up shirt seen on celebrities, is making good on plans for its own retail.

The company has tested pop-ups in the past, including within Harrods and The Surf Lodge, and now has a pop-up at The Grove set to open Saturday and remain in operation through April 30. The temporary space will be located in the shopping center’s dedicated Glass Box pop-up space.

Rails will mostly play up its women’s offering, but will also have on hand some of its men’s and kids’ pieces. The Grove will be followed up in October with a permanent store in Los Angeles. In spring 2020 Rails plans to open a New York store, with the goal of opening as many as two to three stores over the next four years — all funded through the company’s profits.

The strategy makes good on a brick-and-mortar ambition the company had been considering for a few years. However, growth of its wholesale business had largely kept it from moving forward until now.

“One of the challenges for us getting to retail is that there’s so much growth happening in the wholesale business,” said founder Jeff Abrams. “We’ve really been growing the collection itself into new categories and gaining new placement [in stores]. One of the main objectives going forward is really helping to allow our customers to interact with us in a much deeper way than in the past.” 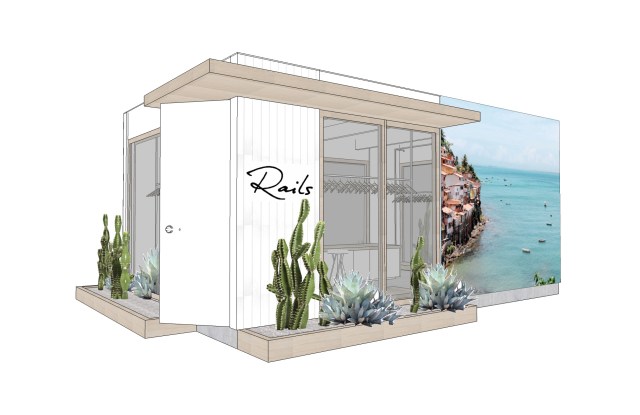 A rendering of the Rails pop-up at The Grove.

Similar to the reasons most brands decide to plant flags with their own stores, Rails sees the outposts as complementary to its retail partners with flagships able to showcase the full assortment. In Rails’ case, that’s key with the brand having ballooned to include product for the entire family. It can tell that story on the web, where half of its traffic is coming from overseas. Brick-and-mortar serves as another path to getting the point across.

Abrams, who started the business in 2008 with a $5,000 investment, has seen $350 million in retail sales to date through the brand. Rails is in about 1,500 stores worldwide. The privately held company reported 40 percent year-over-year growth with a corporate headcount of 100.

At least initially, Rails gained a following with its button-up shirts seen on celebrities such as Jessica Alba, Gisele Bündchen and Kendall Jenner. Today, the line has ballooned to include T-shirts, outerwear, sweaters, men’s and kids.

“We’ll try to replicate our DNA in all the locations that we’re opening,” Abrams said of the stores moving forward.

He said the goal is to keep the Rails doors under 1,500 square feet because “we want the experience to be intimate” and he cautioned the stores are not meant to replace the wholesale business or signify greater focus on direct-to-consumer.

“We’ve been very fortunate that we’ve been a pretty profitable company,” Abrams said. “We’ve been pretty disciplined in the way we’ve invested and grown our brand. The goal is not to create an out-of-control retail expansion plan….The retail component is just one element of creating a much bigger, global brand. In the early days, as we were growing in the wholesale channel, it was very much about getting people to showcase our brand. Now we really want to control the experience.”