Fashion and beauty brands are showing their support with rainbow-colored merchandise.

LONDON — From the high street, to premium luxury, brands across the spectrum have been embracing Pride in a big way and showing their support for the LGBTQ community, with an array of capsules dropping in the weeks ahead of the Pride parade.

But are customers buying the high-shine, rainbow-hued merch that’s flooding the market?

According to brands, they very much are, with Pride capsules leading to high sell-throughs and positive customer engagement.

Burberry was among the first brands to unfurl the rainbow flag, with Christopher Bailey marking his final show in February 2018 with a big Pride statement. He worked the flag into a capsule collection and made a host of related donations to charities helping LGBTQ youths.

Burberry’s first openly gay chief executive officer with a husband and two young children, Bailey had long supported the LGBTQ community inside and outside the company while serving as chief creative officer and ceo. At the end of his tenure, he wanted to make a big public statement about these causes, and the Burberry rainbow check was born. He described it as an “an emblem for optimism and inclusiveness.”

Tracksuits spelled out the brand’s name in rainbow-hued colors, fur capes and bombers in the same bright stripes, and all of it was made available for purchase immediately after the London show. The rainbow capsule collection was a commercial success, and the rainbow cape that closed the show currently features in the Metropolitan Museum of Art’s “Camp: Notes on Fashion” exhibition. 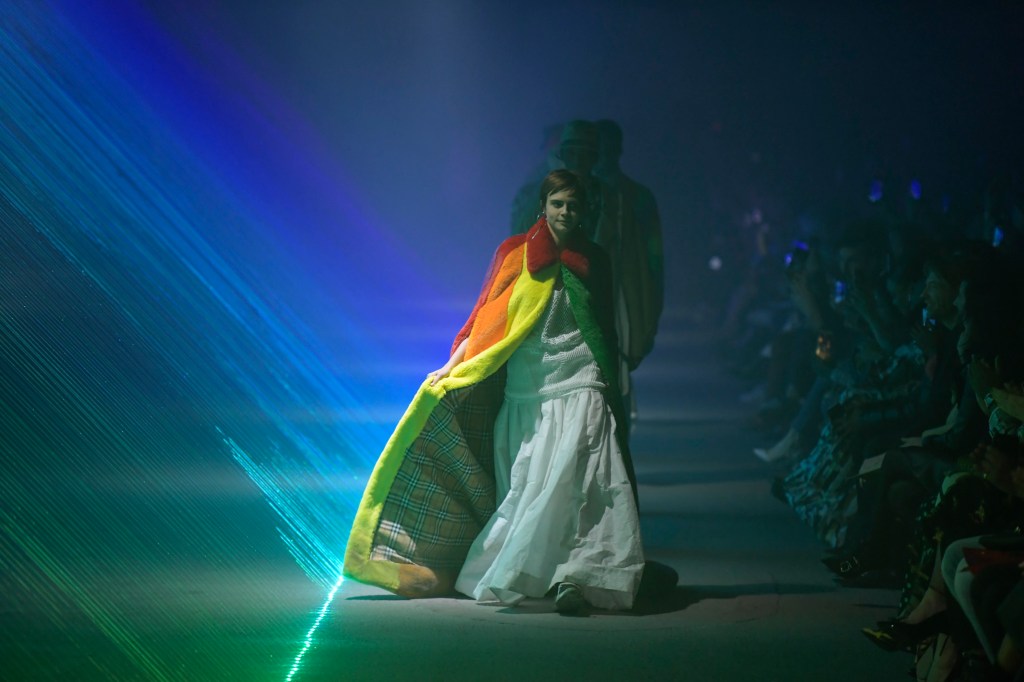 A look from the Burberry fall 2018 ready-to-wear collection.  Giovanni Giannoni/WWD

Since then, designers across the fashion spectrum have gone all out with the rainbow merch — and customers are responding.

Todd Snyder said styles are already selling out from its TSPride capsule.

“The collection was an organic extension of our current product assortment, and we tapped close friends of the brand from the LGBTQ+ community such as Billy Porter, Lea DeLaria, Richard Haines and Dominique Jackson to bring the campaign to life,” said Alejandro Rhett, vice president of Todd Snyder.

The brand’s TSPride collection has not only been successful commercially, with two of its styles sold out already, it has managed to create engagement on social media. “We’re seeing lots of people engage with the #TSPride tag on Instagram and we’ve also created an installation in our Madison Park store to give members of the community a space to connect with the faces of the LGBTQ+ movement,” Rhett added.

On the high street, online retailer Asos has confirmed it has sold 10,500 units from its Pride capsule so far, and plans to make the range — created in partnership with the online media outlet GLAAD which reports on LGBTQ issues — available all year round.

London-based Henry Holland has also seen his Pride capsules — chic, monochrome suits in bright colors that match the LGBTQ flag — become a core part of his business, with year-round sales.

“I think that the messaging and the reasoning behind creating the capsule resonated with our customer base and felt authentic to our overall brand message of inclusion,” said Holland of his first capsule which debuted last year. He added that part of its success was that even though the capsule represented the LGBTQ flag, the individual pieces could be worn “in a less obvious way.”

This year, Holland reworked his suits in satin and in new shades — black, white and sugary pinks or blues — that represent the trans pride flag. The suits were modeled by Maxim Magnus and Finn Buchanan, two trans models who have grown into some of the industry’s most in-demand faces in the last year. 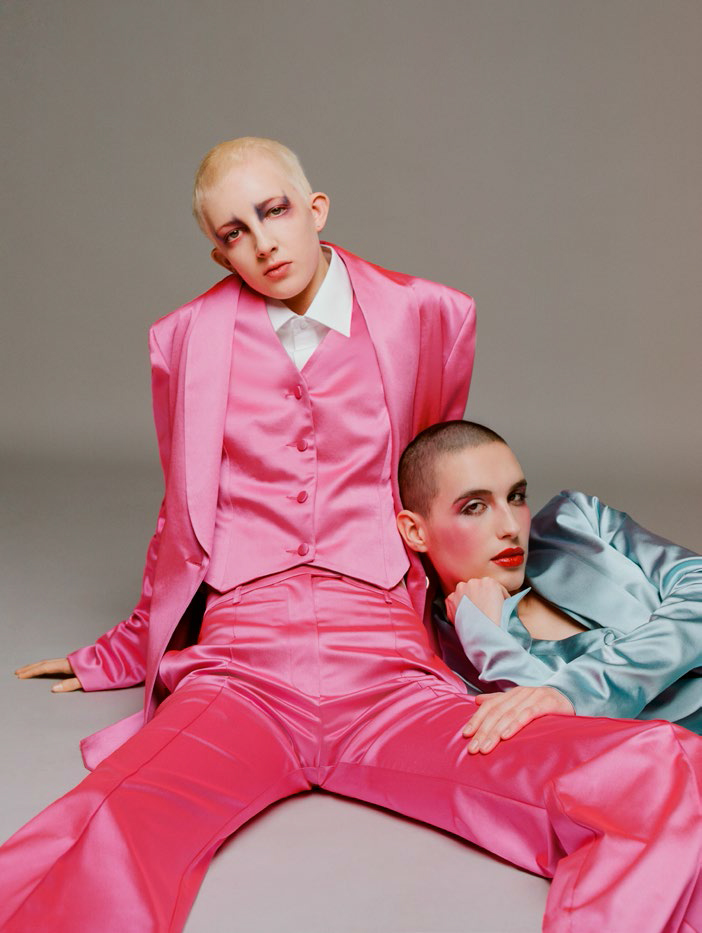 “The decision to do a second collection was twofold, really, to enable us to generate more funds for the Albert Kennedy Trust, but also to show our support and for another group within the LGBTQ+ community that has seen some pretty devastating pieces of legislation passed, threatening their human rights this year,” added Holland, referring to trans individuals.

Last year, he also raised 10,000 pounds for the AKT charity, which serves lesbian, gay, bisexual and transgender young people who are homeless.

Even though rainbow capsules appear to be generating excitement at retail, making a profit is not the aim of these initiatives for the majority of brands involved. As with Burberry and Holland, it’s more about raising awareness and funds for relevant causes and charities.

The Burberry Foundation made, and continues to make, donations to charities including the Albert Kennedy Trust, the Trevor Project and ILGA, the International Lesbian, Gay, Bisexual, Trans and Intersex Association, all of which aim to broaden awareness, mentor and make resources available to LGBTQ communities worldwide.

At the time, Bailey referred to them as “some of the best and brightest organizations supporting LGBTQ youth around the world. There has never been a more important time to say that in our diversity lies our strength, and our creativity.”

By ensuring that their companies’ Pride plans are tied to advancing LGBTQ causes, brands are also managing to make their voices heard about something other than product.

“To be honest, we see our participation not as much as a marketing exercise, but as part of our social mission. Our engagement with Pride is to show our support for the LGBTQ+ community and to further our overall social mission of providing more guys with access to mental health care,” said Scott Newlin, design director of Harry’s, adding that its Pride collection has already sold out in the U.S. 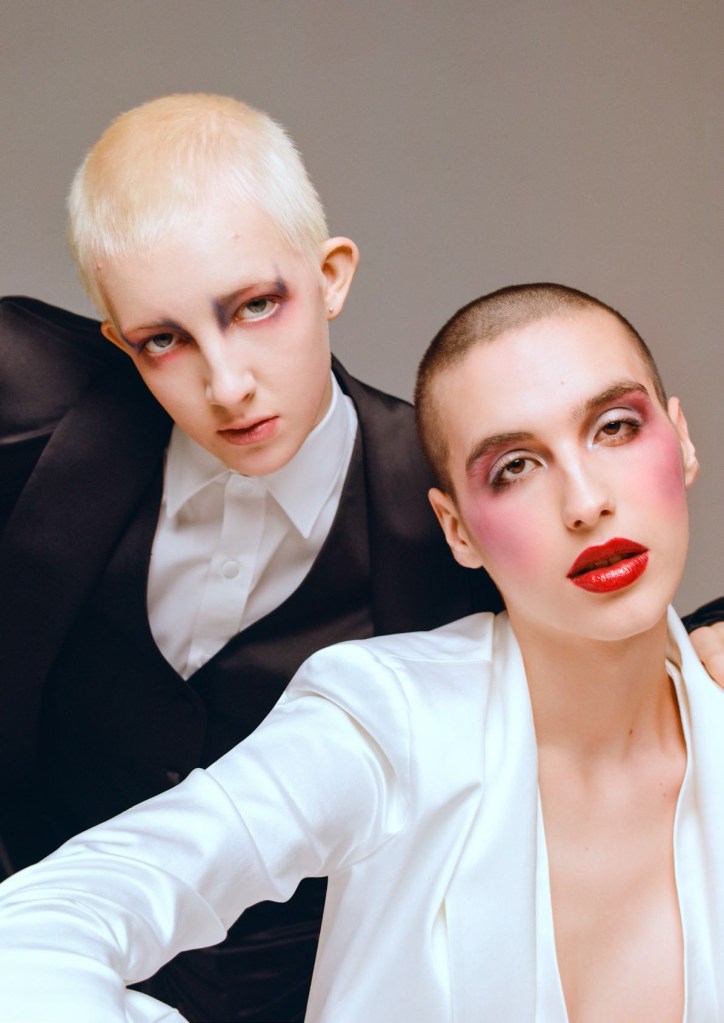 Ditto for Nike, which has, to date, donated 3.6 million pounds to LGBTQ causes and is supporting more than 20 organizations this year, with its new collection, “Be True,” inspired by activist Gilbert Baker, who is behind the original design of the LGBTQ rainbow flag.

Taking its cue from Baker, who was always covered in glitter, the company came out with striped active wear, sparkly socks and a range of sneakers featuring the colors of the Pride flag, and Baker’s signature, in the insoles.

In the beauty world, there have been plenty of rainbow-hued eye shadow palettes, holographic lip glosses, bright highlighters and makeup pouches in the colors of the rainbow.

This is the first year that beauty brand Revolution is creating a Pride-specific collection, and customer feedback on social media and digital has been strong.

“We are putting our money where our mouth is, and donating an incredible amount of money to a charity partner up front, no matter how much or little our Revolution Pride collection sells,” said Sally Minto, digital director of Revolution Beauty, adding that the brand’s Pride collection has been as strong as other key product launches this year.