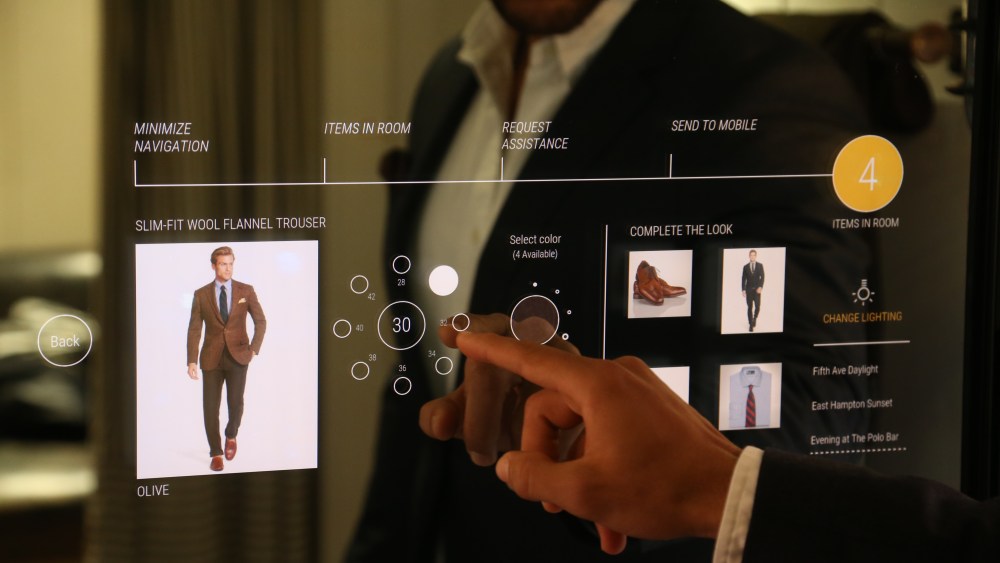 The brand will today unveil the Oak Fitting Room at its flagship on Fifth Avenue here, an interactive touchable mirror created by six-month-old tech startup Oak Labs that delivers advanced yet unobtrusive technology to the offline retail world. Shoppers can tap on the mirror to request a different size, corresponding items or to seek assistance from an associate.

“Omnichannel” is already antiquated, Healey Cypher, cofounder and chief executive officer of Oak Labs, said Tuesday morning before heading to the Polo store in Midtown to demo the smart fitting room. He prefers to use the words “integrated commerce” to describe the way Oak uses technology to enhance the in-store experience.

The former implies that a series of siloed organizations and experiences — mobile, Web, app and in-store — are trying to weave a cohesive thread, but this is not how Cypher thinks organizations should approach the on- and off-line worlds. “Integrated commerce is truly a singular experience between the customer and the brand,” he explained. “Instead of looking at it as a ‘mobile sales,’ ‘e-commerce sales’ or ‘brick-and-mortar’ sales — it’s just a sale.”

An example: if a shopper at Polo tries on three items in an Oak Fitting Room, purchases one and then gets a text with a link to the remaining pieces to order from their desktop later, it’s a sale. It’s not about each channel; it’s about each interaction as a touch point on the path to purchase.

This is the future of retail, Cypher believes. And Ralph Lauren believes in it too.

“Both technology and the human touch are equal elements of Polo’s personality, and our customers should experience them seamlessly whether they are in the stores or shopping online,” David Lauren, executive vice president of global advertising, marketing and corporate communications, at Ralph Lauren Corp. said.

The company has already purchased 16 of Oak’s full-size touch screen mirror units, eight of which are installed in Polo’s Fifth Avenue flagship at 55th Street here — four on the women’s floor and four on the men’s floor. There are plans to unveil the remaining eight mirrors in additional Polo doors in high-performing markets next month.

“From the day the Polo flagship opened on Fifth Avenue, we wanted it to connect with the customer and that meant emotionally and digitally. Fully wired fitting rooms and the digital displays for PoloTech blend in seamlessly with the fireplaces and Ralph’s Coffee shop,” Lauren continued, noting that the mirrors are a follow-up to two recent in-store tech initiatives: the release of the brand’s first smart shirt and the holographic windows that supported it.

For Cypher, it’s the first time that the definition of mobile can be challenged.

“We’re realizing that ‘this’ is not mobile,” Cypher said, emphatically waving his iPhone 6. “If you were to set this down and walk off, your phone will stay there. We’re mobile.”

He contended that mobility is building experiences that let the consumer keep their head up and in the immersive retail environment. And he is intent on bringing his brand of integrated commerce to the retail industry — at scale.

During a walk-through showing exactly how Polo’s interactive fitting rooms work, he said that a person enters the store, selects the items they wish to try on and approaches a fitting room. The mirror in the empty fitting room is at a default resting state and playing branded content on loop.

Once the shopper enters the room, the mirror automatically recognizes what is brought in via RFID chip, the lighting changes and the resting content fades away. They are welcomed by a user interface and given the choice of three lighting settings: Fifth Avenue Daylight, East Hampton Sunset and Evening at The Polo Bar. Everything they’ve brought in with them is populated on the mirror, where additional colors, sizes and recommended items are at their disposal with just one tap to notify an associate.

Customers can also translate content into five additional languages, including Italian, Portuguese, Spanish, Mandarin and Japanese. This means that a person can be visiting New York from Brazil and make requests for additional pieces using the mirror in their native Portuguese. The associate can respond in English on their end and their response will automatically be translated to Portuguese.

“Innovation in stores normally fails because associates don’t adopt it. We’re building associate software as if it were consumer-facing because they are arguably the most important consumer of our technology,” Cypher said.

When an associate gets a request, the app doesn’t just notify them that they’ve received a request. Instead, they are informed of the exact style, color and size, as well as exactly where an in-store item is located. If it’s not on the floor and in a stock room, they are given the number to call the stock room to get the product.

The final step occurs when a customer presses the “I’m ready to check out” button and an associate comes over with a mobile point of sale to complete the purchase. If they wish to buy later, their mobile number can be entered and they will instantaneously get a text with a direct link to purchase all of the items they tried on during that session, or what Cypher called “the abandoned cart for the physical world.”

Ralph Lauren already had mobile POS and RFID coverage across many of its stores, and Oak tapped into the company’s existing RFID management system. Until now, the brand used RFID for inventory accuracy and supply chain efficiency, but the connected fitting room is the first customer-facing experience that uses RFID technology.

In a nutshell, the way Oak approached retail is akin to finding the “acute moments of pain” in the offline shopping experience and introducing technology in a way that feels effortless and almost invisible. Cypher highlighted some of these moments: if someone likes something but the exact size and color aren’t in front of them, there is a 65 percent chance that they will not ask for help. If a shopper does find an item they want to buy but the line is over seven minutes long, there is a 79 percent chance that they will abandon that purchase.

“On the flipside, if someone goes into a fitting room there is a two out of three chance they will make a purchase — and if someone talks to an associate, the chance they buy is five times more,” Cypher said, stressing how large of a component human interaction is for the Oak Fitting Room to succeed. “It doesn’t dehumanize it, but re-humanizes it.”

Cypher sharpened his tech skills at eBay for over four years before venturing out on his own, previously heading up retail innovation at eBay Inc., where he founded the retail innovation team in 2013. Kate Spade Saturday’s Digital Window Shop was the first retail project with a fashion brand that his team rolled out during the summer of 2013, which turned existing storefronts into touchable, shoppable windows where items could be delivered anywhere in New York City within an hour.

But the most high-profile initiative from the eBay team was the Connected Store, which launched with Rebecca Minkoff last November. While the product was lauded in the press — with Rebecca Minkoff ceo Uri Minkoff saying the technology helps the brand sell three times more apparel than originally projected in-store — it’s remained more of a one-off item than a retail solution that could scale in a big way.

Amid corporate restructuring earlier this year, Cypher, along with colleagues Michael Franklin and Darren Endo, all resigned from eBay in the spring and decided to join forces in early summer. The three partnered with Flynn Joffray, another eBay alum who is now Oak’s chief technology officer, and rebuilt the smart store experience from the ground up in a way that was truly scalable, starting with the fitting room. The mirror’s prices can range from $10,000 to $15,000, depending on how customized the unit is but the goal is to get that to much less as the company ramps up production volume.

While the idea stems from past experiences, Cypher is clear that Oak uses all proprietary hardware and software, built by electrical engineers on staff, which is now comprised of 10 full-time employees.

Oak Labs has raised a $4.1 million seed round, led by Wing Ventures, the firm started last year by partners from venture firms Accel Partners, Sequoia Capital and Silver Lake. Cypher plans to do a second series of fund-raising in mid- to late 2016.

“There is a common narrative, especially in retail, that online is a better place to collect data — but that’s only because they do it. I’d argue that the physical store is a much more interesting place to gather data. Online is black and white, and in-store is all the shades of gray — the nuanced data that actually makes the experience better,” Cypher said.

Jeff Schneble, a former operating executive from Silver Lake who is now a partner at Wing Ventures, agreed.

“[The Oak Fitting Room is] a huge opportunity to make physical retail as data-driven and engaging as e-commerce has been,” said Schneble, citing this as a key reason for investing in the company.

E-commerce — from the way people engage to conversion online — has been data-centric to date, but in the physical world it’s been a “black box,” Schneble added. Except anecdotally, it’s been hard to quantify what clothing people like and what they don’t like. The smart fitting room helps make gathering this data easier, and in addition to seeing what popular items are, associates can now see what products people try on but might not necessarily buy or if certain items never even make it to the fitting room.

This is invaluable data to a merchant and brand which, armed with this data, can soon make the on- and offline worlds an even playing field.