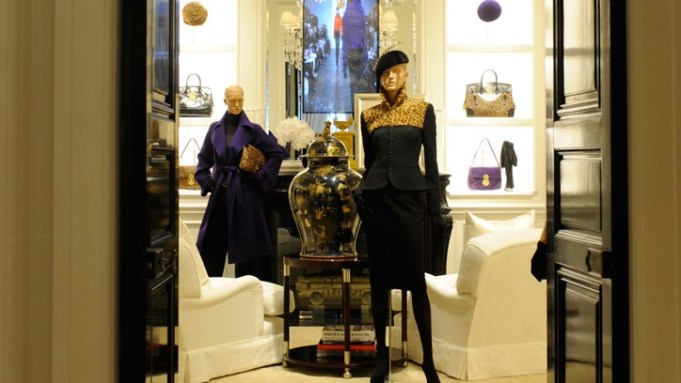 Adding another prime site to the company’s continued international expansion program, the firm today will inaugurate a 6,500-square-foot town house-style woman’s boutique on the upscale Avenue Montaigne shopping street here. Sources estimate it could do 20 million euros, or $29.2 million, in first-year sales.

“Paris has long inspired me for its timeless beauty and rich history,” said Lauren. “Avenue Montaigne is one of the world’s great shopping streets and the perfect location to showcase our women’s collection.”

“This is a strategic and deliberate element in the [company’s] long-term strategy,” said Charles Fagan, executive vice president of global retail brand development. “It focuses on new category development, offers an increased penetration of women’s with a focus on luxury and is part of the expansion of our global presence.”

Devoted exclusively to women’s accessories and clothing, with a marked focus on the most luxurious elements in Lauren’s collections, the store, just down the street from Dior, Gucci, Dolce & Gabbana and Fendi, is Lauren’s largest women’s-only statement in the world.

It underscores the designer’s desire to develop his retail business in the French capital, where he has operated a single store on the Place de la Madeleine for the last two decades. Next year, Lauren plans to inaugurate a 16,000-square-foot building on the Boulevard Saint-Germain, near Sonia Rykiel, which will include a restaurant, made-to-measure services and all of his collections, including homeware.

The Montaigne store also comes amid an aggressive rollout of Lauren stores worldwide. Next week the company will open in Istanbul. Stores are slated to open in March in South Korea and Dubai. Recently the company opened stores in Moscow, Milan and Los Angeles.

“Ralph’s mantra to us [as a retail team] is to connect with the neighborhood,” he said.

A far-flung overhaul of the space, previously a Jil Sander store with a stark, linear aesthetic, was required to achieve that goal. The result — limestone floors with black cabochon details, white damask drapes, walls of molded plaster and large crystal chandeliers hanging from corniced ceilings — is an obvious homage to a certain French decorative style and couture.

“We wanted to create a sense of residence,” said Fagan, who added the space used to be part of Madeleine Vionnet’s atelier. Further connecting to the haute couture heritage of Paris, the store also offers Lauren’s first eveningwear salon. It is on the second floor and lined with mirrors. Two imposing columns topped by large black vases holding white roses frame the view onto the street below.

Accessories are a focus, with the entire ground level devoted to the category. Shoppers enter to find a room lined with shelves and iron Art Deco-style vitrines. They are filled with buffalo plaid and leopard print bags, including a cashmere green and black buffalo plaid model called Saranac that was created exclusively for the store.

Sunglasses are exhibited in the foyer below a sweeping staircase. And in the back of the ground floor are more bags, including the Ricky bag. A custom-order service of crocodile Ricky bags in 15 different colors is being launched in the Paris store. It will cost 20,000 euros, or $29,300, and require four months before delivery.

The counterpoint to the first-floor’s couture salon ambience (a second room on the level has a marble chimney and displays looks from the runway collection) is the basement. Its decor is more relaxed, with gilded lanterns and country-style wood tables. In its three rooms are displayed footwear and a mélange of different Ralph Lauren lines, from Purple to Black label.

Beyond the decoration, Fagan said a lot of work was done to merchandise the store with a Parisian flair. “We’ve mixed the labels in a way that is specific to Paris,” he said. “The idea was to broaden the impression of Ralph Lauren women’s wear in Europe beyond chic American sportswear.” In that vein, as much as 90 percent of the clothes displayed come from Lauren’s top-end collection line.

A dinner, cohosted by Carine Roitfeld, editor in chief of Paris Vogue, and David Lauren, Polo Ralph Lauren Corp.’s senior vice president of advertising, marketing and corporate communications, is planned here on Oct. 3 to mark the opening. Ralph Lauren is not expected to attend.

Meanwhile, the Ralph Lauren Watch and Jewelry Company, a joint venture between Polo Ralph Lauren and Compagnie Financiere Richemont SA, will debut its first collection at the Salon International de la Haute Horlogerie in Geneva, taking place from Jan 19 o 23. In 2007 the companies announced their partnership to design, develop, manufacture and distribute luxury watches and fine jewelry throughout select Ralph Lauren boutiques as well as independent jewelry and watch retailers across the world. It is Polo’s first foray into fine jewelry and watches and also the first joint venture of its kind for Richemont, which owns brands such as Cartier, Van Cleef & Arpels and Jaeger Le Coultre.