Ralph Pucci on Display at Macy’s

The retailer has installed 50 of the designer's mannequins in the windows of its State Street flagship in Chicago —?including some of his most creative. 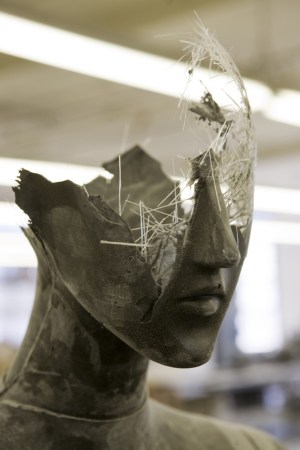 Macy’s and Ralph Pucci are stepping out with a retrospective of Pucci mannequins at Macy’s State Street flagship in Chicago.

This story first appeared in the April 16, 2013 issue of WWD. Subscribe Today.

The show is being held in conjunction with GlobalShop, the world’s largest event for the retail design, display and fixturing industry at Chicago’s McCormick Place.

Macy’s and Pucci have a long history working together on window and selling floor presentations, but maybe not quite so dramatically as what’s been installed at the State Street flagship, which formerly was Marshall Field’s. Macy’s has installed 50 Pucci mannequins representing 27 collections over a 30-year period, including some of Pucci’s most creative — think Christy Turlington in a yoga position or Kenny Scharf’s arty alienlike figures. There are also those done in collaboration with Ruben Toledo and the late Andrée Putnam, as well as Pucci’s latest and most elegant collection, called Lady, used by Saks Fifth Avenue and other upscale retailers, and his Guy collection, which is young and contemporary in character.

Pucci’s retrospective is being displayed in 11 windows for a month. The show includes a behind-the-scenes video of Pucci’s studio on 18th Street in Manhattan; blown-up images of the Pucci scene taken by Antoine Bootz, and a remake of the artist David Storey’s art installation from Pucci’s 2011 mannequin show.

“This is a tremendous honor,” Pucci told WWD. “You can really see how much time and effort goes into detailing a mannequin and how much the art world, pop culture and fashion intermingle in our work.” Pucci’s New York showroom, also on 18th Street, is an eclectic mix of home furnishings, art, photography, lighting, fashion and mannequins.

Also at GlobalShop, Joe Feczko, Macy’s senior vice president of innovation, integration and broadcast, will receive the DDI Markopolous Award for his long career in retail and marketing innovation. Feczko’s credits include Macy’s Believe campaign for Christmas; associate producer for NBC’s “Fashion Star;” executive producer of the Emmy Award-winning animated special “Yes, Virginia,” which is part of the Believe campaign, and the introduction of a quick-response codes campaign for Macy’s “backstage pass.” The Markopolous Award is named after the late Andrew Markopolous, the legendary visual merchandiser at Dayton Hudson.