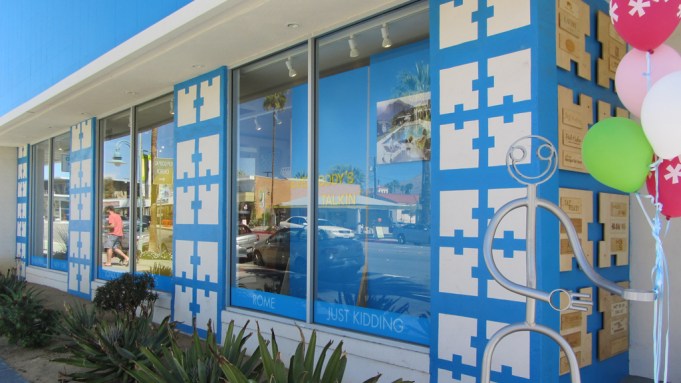 The sign outside the store door reads “No Shirt, No Shoes, Meet Me Out Back.”

Welcome to the world of Raymond Lawrence, where its stores — one in Palm Springs’ Uptown Design District and two outposts inside area hotels — serve edgy humor across a collection of pop-ups on the selling floor, ranging from housewares to apparel. Some of these brands include The Body Deli of Palm Springs, LASC from West Hollywood and Covet out of San Francisco.

“It’s kind of like shopping the Internet,” cofounder Larry Abel said of the store. “Every time you turn around there’s something new to look at.”

Their main merchandising focus is creating a retail experience that doesn’t take their business too seriously.

“People are too serious about their lives,” said Raymond McCallister, the other half of Raymond Lawrence. “Our events and our home has a sensibility of fun. If it’s not fun, if it’s not funny, then we don’t bring it in.”

McCallister and Abel are set to take the Raymond Lawrence concept to Nashville in September, with many of the same brands in their Palm Springs store, and have plans for another stand-alone shop in Austin next year. That’s coming on the heels of its recently opened store inside the Ritz-Carlton Rancho Mirage and one at the Saguaro Palm Springs.

There’s no shortage of head-turning items to look at upon walking through the door, with product merchandised by department. A section named “Blow Me” contains beach towels and inflatable pool toys, including the swan that made its way into many a Coachella Instagram post. “Eat, Drink and Put Something Under That” houses napkins and coasters. The “Party On” section at the back of the store is stocked with a plethora of wigs, costumes, balloons and other party supplies from Party Labs Palm Springs, a locally based company that the two entrepreneurs acquired in 2013. Real estate agent Paul Kaplan has his own section of the store, set off by displays that look like a mid-century modern home. He’s actually sold a few properties, too, according to Abel.

“I always tell people you can buy a bikini to a house here,” Abel said.

The store, with its range of product and hotel locations — miniature versions of the flagship — in some ways mirrors Abel and McCallister’s business portfolio.

They have the retail along with Party Labs Palm Springs. Their start was in the events business and the two operate Abel McCallister Designs, which started in 2004 and puts on some 340 events or activations annually. There’s also Art Style Innovation, a company that designs home furnishings and produces many of the fixtures that can be found inside Raymond Lawrence or at the two men’s events.

Raymond Lawrence’s concession model plays host to a variety of smaller, local or regional brands and has become an incubator, as Abel would tell it. It’s been a launching pad for some entrepreneurs to eventually branch out on their own, including Destination PSP.

The store has helped grow others. V&G Hipwear and Accessories, which has been at Raymond Lawrence for the past three years, started out selling fringed hip belts and cuffs, but later expanded into jewelry and yogawear at the prodding of Abel.

“This made me a bona fide business,” said V&G owner Gayle Weintraub. “This is the perfect environment for me.”

As for Raymond Lawrence’s own growth, the company’s decisions on future locations have been paired with decisions related to the events business. Nashville makes sense because they already do a sizable number of events there.

Still, the goal isn’t to go for real estate in primary markets, such as Los Angeles or New York, where retail options for consumers abound, Abel said.

As for what’s kept customers coming back, it’s the store’s accessibility. Items range from $1 and can go up to the thousands of dollars.  ”We try to keep things fun and approachable,” Abel said. “It’s kind of like an auction. When you start out low, everyone can get involved.”