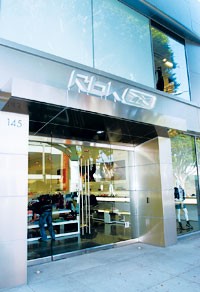 The multilevel, 3,500-square-foot store features an exclusive high-end collection as well as a VIP room and private screening area. The store is a few doors down from The Ivy, the fashionable restaurant and celebrity haunt, and joins neighbors such as MAC cosmetics, Hogan, Maxfield Bleu and boutiques like Kitson and Lisa Kline on the southern end of the boulevard. An official launch is planned for October, with California Gov. Arnold Schwarzenegger planned as the starring guest.

“There’s no question it’s a hot street,” said Larry Gore, senior vice president of retail for Reebok. “We felt that it was important because of L.A. and the media.”

Rbk is Reebok’s division catering to young customers and is one of the company’s fastest-growing areas, executives said in a recent earnings report. Rbk also houses the company’s footwear collections with Jay-Z, 50 Cent and Pharrell Williams. There are also Rbk stores in Philadelphia and London.

Retailers are finding that having an heiress or any incarnation of Hollywood’s bright young things shopping their stores can translate into big dollars, so companies are looking for ways to lure that customer.

Reebok’s answer has been to accommodate almost every whim of their celebrity clientele: a VIP room complete with an X-Box (Christina Ricci apparently loves to play), television and bar stocked with Dom Perignon, and a showroom that converts to a private screening room in the evening, where the company hopes to host movie premieres and after-parties as well as music and product launches.

“For us to succeed [in L.A.] we realized that we had to do something special and unique to create the heat and buzz to get that clientele to come into that space,” said Denise Kaigler, Reebok’s corporate vice president of global communications. “And there’s nothing that speaks more to that than the screening room and VIP room.”

This story first appeared in the September 23, 2004 issue of WWD. Subscribe Today.

But will a sleek design, shoe bar and celebrity sales translate into dollars for the company?

“I think that [Reebok is not the only] consumer brand out there trying to introduce higher priced-point products to make their products more desirable to consumers,” said Andrea Newell, senior analyst at Wells Fargo Securities. “I think it’s a much smaller market to capture, but it’s one way to compete against mass market channels and maintain your brand.”

The new apparel collection, which will be sold only through the Robertson location and the high-end store at the Reebok Sports Club in New York, features items such as cashmere hoodies for $180 and pants for $175, as well as cashmere travel blankets for $400 and cashmere slippers for $175.

“It’s the first time we’ve done something this fashionable and on trend,” Kaigler said of the L.A. store and its offerings. “Being in a chic area of L.A. gives us an opportunity to showcase these cutting-edge products while keeping an eye on the entertainment industry.”

About 70 percent of the customers who have been coming into the store have been women, and half of the store is geared toward servicing the high-end female shopper. “I expect that we will see a much higher average ticket out the door,” Gore said. “There’s a very serious customer on that street.”

Sources familiar with the new store estimate sales will be about $600 to $700 per square foot.

To capture the customer who shops at independent stores, Reebok designed a space that has a boutique feel. Modern white walls, simple concrete floors, oversized concrete bowls for architectural display and some well-placed stalks of lucky bamboo set the backdrop for the store’s most impressive display: the shoe bar — an elevated Plexiglas counter that runs the length of the store and features independently lighted compartments for showcasing each style.

The company has been on an aggressive marketing campaign, pursuing the market not simply through advertising, but through sponsoring and cosponsoring awards shows, charities and other events, which help link the brand with Hollywood. Reebok is one of the sponsors of the Hollywood Film Festival and will be presenting the best documentary award at the gala on Oct. 18. The company also is sponsoring the Carousel of Hope charity for juvenile diabetes on Oct. 23 at the Beverly Hilton, and will provide gift bags for all 1,500 attendees — including Oprah Winfrey and Halle Barry — which will have a gift certificate for a pair of shoes from Rbk.

“The events have to be very special and unique and speak to L.A. consumer and Reebok culture,” Kaigler said. “There is no other store that we have like it.”