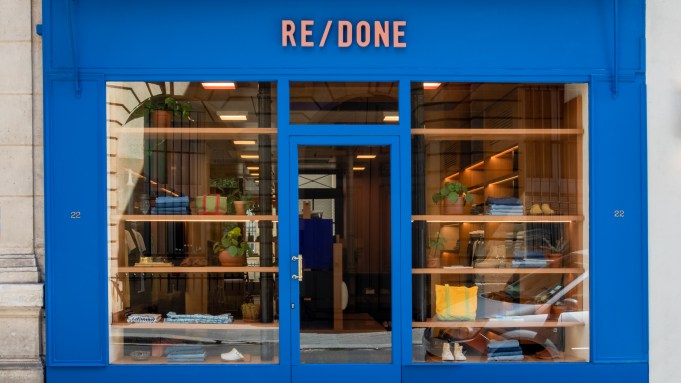 The Los Angeles-based label, launched in 2014 by Sean Barron and Jamie Mazur, is known for reconstructing vintage Levi’s denim into modern styles.

Its retail footprint is found in West Hollywood and Malibu in L.A., Miami and the Hamptons in New York, and now at 22 Rue de Grenelle in the 7th arrondissement of Paris, in the heart of Saint-Germain.

“I wanted to be part of the local environment for my first store [in Paris],” explained Barron, chief executive officer of Re/Done. “Real Parisians shop in the Saint-Germain area.”

It’s an intimate space, at almost 500 square feet. Like all Re/Done locations, it takes influence from midcentury design. This time, it’s with a French touch. Based on a Schindler architecture, amid wooden framing, interior details include slipper chairs made by French designer Pierre Guariche.

“Our company is quite interesting in that we’re very well known internationally, especially in the E.U., and we’ve done a lot of work to build the company in that territory as well, from wholesale channels to marketing,” Barron said of the move. “People have fallen in love with the idea of what we do in terms of sustainability with Levi’s.”

Re/Done has upcycled nearly 200,000 pairs of Levi’s, an offering that has done well for the brand in Paris. With 40 percent of its site traffic coming from international markets, the Paris region makes up 15 percent, revealed Barron. Wholesale represents 55 percent of the business, while direct-to-consumer on e-commerce and brick-and-mortars is 45 percent, he added.

Along with Levi’s denim, the Paris store will include another American stable — the Hanes T-shirt, which Re/Done has been recreating in various styles using recyclable yarn. Also in-store will be “marketplace,” a curated section showcasing other vintage dealers.

“Europeans, especially the Parisians love the vintage,” he said. Rigid and loose fits are the trend, he added.

Next, the brand is focused on launching men’s, expected to debut in the spring of next year.