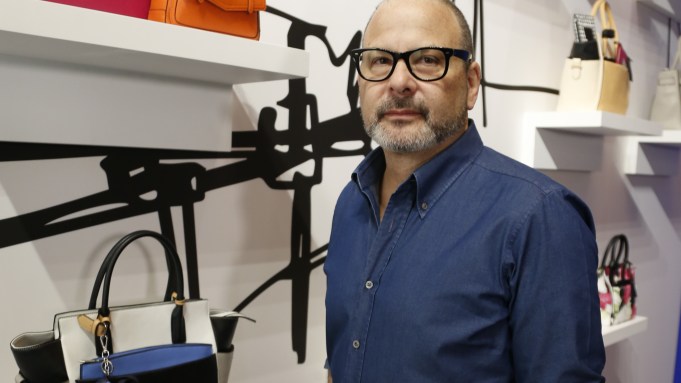 Prior to designing the Reed x Kohl’s collection, which bows in stores today, Reed Krakoff created a signature line with luxury prices in the $1,200 to $3,000 range.

Grand Central, the most populist of places with 750,000 people passing through daily, was a good fit for a collection priced at $15 to $129 and aimed at Kohl’s broad consumer base.

Krakoff was asked if he felt his career had come full circle. Prior to launching his signature collection in 2010, Krakoff was president and executive creative director of Coach, where he was credited — along with former chairman and chief executive officer Lew Frankfort — with driving the brand to $5 billion in sales from $500 million.

He downplayed the cyclical reference to his career, saying, “I’ve worked in every area of the fashion industry, women’s ready-to-wear, men’s, accessories, shoes.”

“This is the new accessible luxury,” Krakoff said of the limited-time Reed x Kohl’s. He added that consumers are getting “amazing design and craftsmanship at reasonable prices.”

Women were lined up all the way to the station’s 42nd Street entrance at 8 a.m. when the shop opened to receive a free handbag.

Women first stopped at a desk where they were given a handbag from the collection. Next was a photo-op at the far end of the room. After that, there was a stop at an iPad station, where an image could be chosen for posterity — and tweeting or Instagramming.

Krakoff estimated that 400 to 500 women had received handbags and the once-over treatment.

“This is a place where so many people walk by,” he said. “We have such a built-in traffic.” However, the word “shop” is a misnomer, because the merchandise wasn’t for sale.

There may be an opportunity to open a transactional pop-up shop, Krakoff said. “We’re talking about a permanent pop-up shop. That’s an idea, if we’re going to continue the collaboration.”

Online sales, which started last Friday, bode well for the success of the line. “It’s been amazing,” Krakoff said. “They sold 5,000 bags on the first day.”

Krakoff planned to visit a Kohl’s store on Thursday, possibly in Connecticut.

An ad campaign for Reed x Kohl’s is running in fashion magazines. A social media campaign for the pop-up event, “See where one bag can take you,” encouraged women to post photos of themselves in a location wearing a handbag to #MustReedXKohls.

Krakoff said there’s a big white space at the Reed x Kohl’s price level for designer accessories and handbags. “Rtw is quite crowded in the designer area, but there are not a lot of choices for accessories.”

The Reed for Kohl’s collection was developed in conjunction with Global Brands Group, which partnered with Krakoff and Kohl’s on design, sourcing and production.

“My own brand,” Krakoff said, “As this evolves, I will address the other portions of the brand. I definitely feel there’s going to be a next chapter for my signature collection.”