Most readers use mobile to get to the Refinery29 site, and many “never go to the desktop,” said Jake McGraw, director of technical operations. 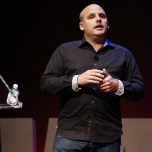 “Mobile is a unique platform with its own constraints.”

That conclusion was the reason why Refinery29 elected to revamp and optimize its mobile platform, said Jake McGraw, director of technical operations.

McGraw noted that 94 percent of Refinery29 readers own a smartphone, while eight out of 10 experiment with technology. Most readers use mobile to get to the Refinery29 site, and many “never go to the desktop,” he said.

The old app took content that was on the site and modified it for the mobile platform. But that doesn’t really work because usage patterns are different between the two platforms, McGraw said, adding that in mobile, one has just “seconds to engage the user.”

Another problem with mobile is the slow connection, which is why Refinery29 uses Verizon EdgeCast to “bump up the speed so delivery [of content] is faster,” he said. Verizon’s content delivery network can determine from one URL whether it is being accessed from a device or a desktop.

“We are now integrating mobile to everything that we do,” McGraw said.

Refinery29, like so many others, is targeting the Millennial consumer, which McGraw said is expected to surpass the Baby Boomer generation by 2017.

He was joined by Anthony Citrano, vice president for communications at Verizon Digital Media Services, who spoke about Millennials and targeting those digitally savvy consumers.

At one point in his presentation, Citrano asked, “How many of you tested your Web site to see around the world how long it takes to load?” Loading times vary globally, depending on access, and digital is becoming a more important part of consumers’ lives.

“If you want to see the future, look at the Millennial. They are the first truly digitally native generation. They grew up online. The Internet is the real world,” Citrano said.

He said Verizon polled 1,000 Millennials, watched the devices they used and saw how they behaved online.

“They control more than $1.5 trillion in consumer spending, and are now entering their prime earning years. They trust people [online that] they’ve never met….Thirty percent are more likely to shop on their mobile device and not their desktop, but most sites are created for the desktop,” he told attendees.

In addition, 65 percent use their mobile device while watching television. “They are serious multitaskers, who are highly visual. They expect [sites] to load instantly. They live in HD [high definition video], and 41 percent will leave a site if it doesn’t load in two seconds,” Citrano said.

He emphasized that companies “have to build for mobile or they are missing out. If your Web site sucks, you suck. They’ll go elsewhere. They take it personally.”

Citrano added that if companies don’t optimize for mobile, they’ll leave a chunk of money on the table given how much the generation controls in spending power.