By Miles Socha
with contributions from Jennifer Weil
on October 1, 2019
View Slideshow 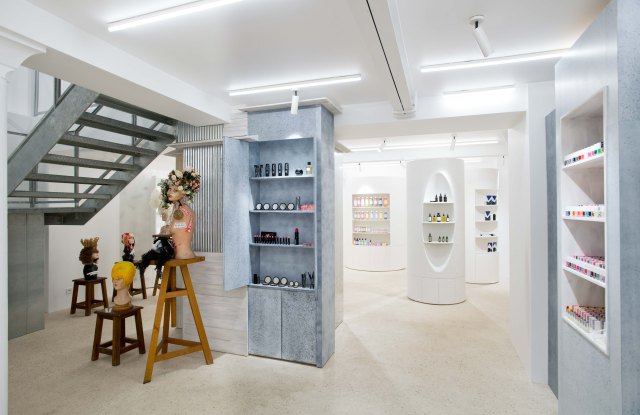 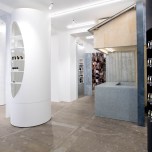 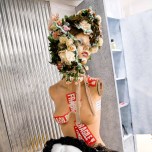 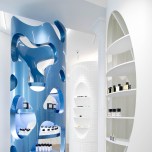 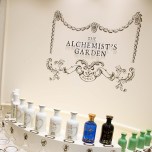 PARIS — “I want to find the equivalents of Simone Rocha and Craig Green in the beauty business.”

Name-checking two of London’s most singular, uncompromising fashion talents, that’s how Adrian Joffe summed up the ethos of the new Dover Street Parfums Market, where he and his wife Rei Kawakubo shunned pretty much every cliché of fragrance selling in their latest Paris project, which opens Wednesday in the Marais district.

“Not a normal beauty counter,” Joffe quipped during an exclusive walk-through on Sunday with WWD, noting the absence of glass cases, advertising collateral, back walls, logos — and gifts with purchase. “It’s a forest of pillars.”

“I think it’s more interesting for the customer to make architecture that requires them to think and allows them to discover things for themselves,” Kawakubo told WWD. “The idea behind the pillars is that you can’t see everything at once and you have to make your own journey of exploration.“

Awaiting shelving that day — on the egg-shaped voids Kawakubo carved out of the pillars — were sleek products by superstar hairdressers Oribe and David Mallett next to an inexpensive hair bleaching kit from Manic Panic, which gives one an idea of the eclectic, “no borders” product mix. Brands skew organic and natural, and there’s everything from magnesium flakes for the bath and Dr. Bronner’s bar soaps to Nannette de Gaspé skin care and Mizensir candles. Perfumes run the gamut from ultra classics like Nina Ricci’s L’Air du Temps and Caron’s Pour Un Homme to cutting-edge names like Kerosene and 19-69.

Joffe said the 2,000-square-foot store is projected to do 1.5 million euros in the first year, and it’s the first of what he dubbed “outposts” for Dover Street Market: smaller retail formats devoted to other key categories, notably sneakers, T-shirts and jewelry. (There are already curated spaces for the latter three categories at DSM emporiums and its e-shop, and outposts could be well-suited to smaller cities that can’t sustain a full DSM, Joffe noted.)

The first outpost, Dover Street Parfums Market, arose when Joffe decided to annex its historic beauty store in Paris behind Place Vendôme for more office space, and the idea dawned to go multibrand. While all six Dover Street Market emporiums carry perfumes, it’s a small fraction of the business, perhaps 2 percent, and only Comme des Garçons fragrances are stocked.

The Marais unit promises to do for beauty what Dover Street Market did for fashion: bringing what Joffe calls “clashes” of creative approaches and price levels in an atmosphere of “beautiful chaos,” anchored by a makeshift metal hut for the cash wrap in the center of the store. “Lost in creation, buried in authenticity, consumed by diversity, originality and inclusivity,” is how the press release articulates the DSM mind-set.

“Rei, she encourages me to do things that other people might not think of. We’re always looking for that new way to get out of preconceived ideas of what is beautiful,” Joffe said. “The beauty industry is quite conservative.”

And perhaps in need of a shakeup. For example, he noted that in perfume, “niche was niche at one time. Now niche is not niche, it’s at an airport,” he continued. “So we always like to carry on questioning and fight the conservative approach.”

Joffe characterized Dover Street Parfums Market as a precursor to a full emporium for Paris, as soon as he can find a suitable building. (He’s looked at seven so far, but is in no hurry.)

While less than a tenth of the size of a full DSM and unorthodox, the new fragrance boutique had no problem securing exclusive launches, marquee names or obscure, artisanal products. “We didn’t get refused by anybody,” Joffe noted.

To wit: The boutique at 11bis rue Elzevir, a hairclip’s throw from the Picasso Museum, scored the worldwide launch of Thom Browne’s new perfume range, housed in a column dressed in — what else? — gray wool, and Gucci’s new lipstick line with an old-Hollywood style makeup mirror and brocade bar stool, plus its The Alchemist’s Garden collection. The unit also boasts a permanent pillar for Byredo, in a glossy blue column that brings to mind a gleaming sports car.

Joffe and Kawakubo are also planning rotating activations and guest brands, starting with a small exhibition of fantasy wigs by hairdresser Julien d’Ys and a MAC Cosmetics corner with a surprising focus. The latter, with a shelving unit by Kawakubo, telegraphs a wish to widen preconceived notions of beauty.

“Rei went to see them in New York and she thought it’d be nice if she picks up existing products from MAC that last a long time that you can do tattoos with. So it’s called the CDG Tattoo by MAC Kit,” he said. “We chose black eyeliners that don’t wash off quickly and also she chose some dark blue ones because tattoos go blue at the end. So you can re-create a kind of tattoo with makeup that’s not permanent.”

He said future activations might tackle teeth grills, which Joffe sees among possible “new ideas of all different kinds of beauty, not just facials.”

The new store arrives just as Comme des Garçons marks 25 years in the fragrance business, and incidentally, Kawakubo herself still favors its original eau de parfum. The Comme des Garçons brand, now partnered with Puig for 16 years, counts some 78 scents, with Wonder Wood and Comme des Garçons 2 the top sellers across Dover Street Market, Joffe noted. New this week are a trio of scents called Clash. They do just that by juxtaposing incongruous ingredients: chlorophyl and gardenia; radish and vetiver, or celluloid and galbanum. Another unusual new scent, Odeur du Théâtre du Chatelet, is slated to launch in the Dover Street Parfums Market on Oct. 10. Joffe noted it’s “the first time ever in a collaboration that Rei designs the box and the bottle.”

Joffe noted he called on Sarah Andelman, formerly of Colette and now head of branding agency Just an Idea, as a consultant on the project, and he’s already on the hunt for more brands in skin care, currently the hot category in beauty, and perhaps some direct-to-consumer brands for temporary activations.

The store has eight full-time staff, all of whom received three weeks of product training from the various brands. “It’s very important, even more important than in fashion, to know what you’re talking about,” he stressed.

To be sure, Kawakubo and Joffe, president of Comme des Garçons International and chief executive officer of Dover Street Market, have been as daring and experimental in retail as in fashion. Starting in the Eighties, the designer revolutionized her stores by opening in offbeat locales, and launching collaborations with brands ranging from Louis Vuitton to H&M.

They took a more ambitious leap with Dover Street Market in 2004, opening a five-story emporium in London mixing all Comme des Garçons brands with an array of blue-chip designers, luxury labels and buzzy streetwear purveyors. It has since expanded to locations in New York, Tokyo, Beijing, Singapore and Los Angeles, and is starting to nurture upstart brands like Honey F–ing Dijon, Rassvet and Youths in Balaclava.

They innovated with temporary concepts long before pop-ups were a thing, planting scores of “guerrilla” stores selling Comme des Garçons collections from previous seasons, sneakers and other products in cities such as Warsaw; Ljubljana, Slovenia, Stockholm, Helsinki, Barcelona and Singapore. The first opened in Berlin in a former bookstore in 2002.

Other concepts include Black Comme des Garçons, a “guerrilla” brand launched in 2009 as an antidote to recession, and Comme des Garçons Pocket stores housing the brand’s Play collection, alongside limited-edition products, wallets and perfumes.

Dover Street Parfums Market arrives as traditional brick-and-mortar fragrance, makeup and skin-care sellers strive to remain relevant amid strong competition from online retailers and digital-native brands. And with its radical display concept, and cherry-picked assortment instead of stocking brands’ entire collections, it feels more like a dynamic interactive art happening.

The haut Marais is a percolating beauty mecca these days. The Rue des Francs-Bourgeois, just before giving on to the Place des Vosges, has one of the greatest concentrations of fragrance, makeup and skin-care sellers — including Bobbi Brown, Edition de Parfums Frédéric Malle and Guerlain — on two blocks than anywhere else in Paris, for instance. Oh My Cream!, a curator of skin-care products, among other beauty categories, has a location on the nearby Rue Debelleyme, and the organic treatment line Huygens has a boutique on the Rue Charlot, to name just a few of the many beauty haunts in the neighborhood.

Asked if Dover Street Market might expand its beauty offering to reflect the Paris outpost, Joffe allowed that he’s mulling the prospect, perhaps even “a mini Dover Street Parfums Market within Dover Street with this concept.” He wasn’t averse to calling these “in-posts.”