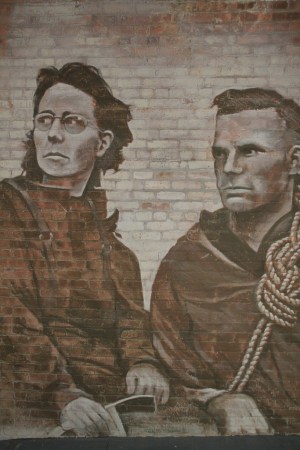 NEW YORK — Another historic building has gone the way of retail: REI, which specializes in outdoor gear and apparel, opens its first Manhattan store inside the landmarked Puck Building in SoHo on Tuesday.

With three levels and 36,000 square feet, the Manhattan store is about a third the size of the REI flagship in Seattle, where the company is based. Yet it could qualify as a flagship, given its grand 17-foot ceiling and cast-iron columns, and the formidable staircase created by carving out a 600-square-foot section of the main floor which displays ski, snowboard, camping and travel equipment, and bicycles. While precious selling space was sacrificed, the staircase is the focal point, providing extended vistas to draw traffic down to the cellar housing men’s, women’s, kids apparel and footwear, and to the subcellar, which has a rental shop for skis, snowboards and camping gear, and a repair shop for bicycles, skis and snowboards. Unlike many gas stations, REI offers free air to pump up your bicycle tires, and there’s a “quick repair” shop on the street level as well.

Also in the subcellar is a community room for classes and workshops on such topics as snowshoeing and bicycle maintenance. Conrad Anker, the famous American climber who was part of the search team that found the remains of legendary British climber George Mallory on Mount Everest, is on the speaker list.

To get New Yorkers in the mind-set for breaking away, there’s a 6-by-15-foot photograph of Constitution Marsh, a sanctuary in Cold Spring, N.Y., and topographic maps adorning the staircase barriers. There are also two walls of photos of customers and employees on their outdoor adventures, and a kiosk to sign up for REI-organized adventure trips.

There’s a natural feel to the store, with decades of paint stripped down to expose the original brick. Furnishings, from the feature walls to the lit canopies above the cash wrap, are constructed of restored pine wood that had been removed from the ceilings, reflecting the conservationist corporate culture. REI, which is short for the Recreational Equipment Inc., regularly dispatches employees to help build trails, clean up beaches and enhance local habitats on a volunteer basis. “The natural materials we used to create the store tie into the REI aesthetic and represent the brand much better than you could with a logo,” observed Alex Shapleigh, design principle for Callison, the architectural firm that created the store and which is also based in Seattle.

The $1.6 billion company operates 122 stores, including SoHo, and was founded in 1938 by Lloyd and Mary Anderson, and other Pacific Northwest mountaineers. It’s a co-op, with $20 memberships required. There are 4.4 million members who get dividends each year amounting to 10 percent of their REI purchases. Mary is 102 and living in Seattle. Lloyd died in 2000.

Instances of retailers taking historic sites for their stores are hardly unusual. In the Eighties, Ralph Lauren set the trend by converting the Rhinelander Mansion on Madison Avenue, and, to the chagrin of rocksters, John Varvatos took over the former CBGB’s site on The Bowery in 2008. Target is moving into the former Galleria building in Portland, Ore., listed on the National Register of Historic Places, to create a smaller format, and into one of Chicago’s most famous sites, the Sullivan Center, formerly known as the Carson Pirie Scott & Co. Building.

The Puck Building, on the corner of Lafayette Avenue and Houston Street, was constructed in two parts, in a Romanesque Revival style, from 1885 to 1893. It’s been used at different times as a printing and publishing facility, by New York University and Pratt Institute and as an event hall. The name Puck comes from two gilded statues adorning the facade, representing the character from Shakespeare’s “A Midsummer’s Night Dream.” The building is owned by Charles Kushner, and his son Jared Kushner, the owner of The New York Observer.

While some may be disappointed by the conversion of iconic structures into a retail setting, those involved in the REI project say they worked diligently to resurrect the original design and character of the Puck Building and convey the story behind it. “We took great care to really respect this building and really bring it back to its original state,” said Shapleigh.

Remnants of its past are exhibited on the selling floor, such as the 9-ton cast iron flywheels of the steam engine that once powered a printing press. The stanchions that protected people from falling into the pit housing the steam engine now serve as ornate merchandise racks. Also displayed are stone printing plates from the early 1900s, and two silvered glass chandeliers were salvaged.

Elizabeth Dowd, the project manager and REI’s director of visual merchandising, also mentioned that transforming Puck into retail space is consistent with its past. “It was always for commercial use,” she said.