Limelight Marketplace opens to the public on Friday.

By Sharon Edelson on May 4, 2010
View Slideshow 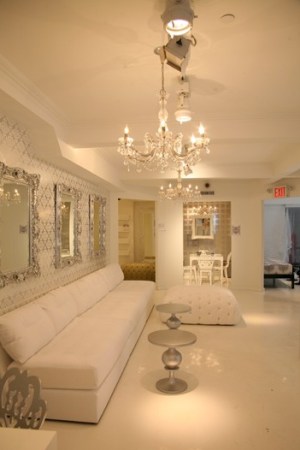 The Limelight has been reinvented once again.

After a $20 million renovation, the 25,000-square-foot Limelight Marketplace opens to the public on Friday at 2 p.m., its transformation from church to nightclub to upscale mall complete. It’s expected to generate sales of $50 million annually.

The brightly lit multilevel space at New York’s Sixth Avenue and 20th Street contains 60 shops, eateries and cafes. Along the street of shops, there are black-and-white floors and no two facades are the same. Retailers include Olatz, Selima Optiques and Book Smart, among others. Food stalls with red awnings can be found on the main floor and in a specialty food hall. There’s also a sweet room with Baci Gelato, Butterfly Bake Shop and Maris.

Turning the massive Gothic Revival-style church into a marketplace was no easy task. The building had fallen into disrepair and the construction budget doubled as contractors uncovered issues under the Sheetrock.

Limelight Marketplace chief executive officer Jack Menashe’s plan wasn’t initially met with much encouragement. “Everybody said I couldn’t do it,” he recalled. “I love this kind of stuff. It was fun.”

Olatz Schnabel, who will occupy a shop close to the front door, said, “I love the idea of Limelight Marketplace. I love the building. There is nothing like it in the neighborhood. There are no department stores in the area.” Schnabel’s Limelight shop is modeled after her Clarkson Street store in the West Village, which looks like an old Cuban pharmacy with black-and-white floors and mint green walls. “This will be a little miniature version of my store,” said Schnabel, who sells bedding, nightwear, slips and shirts and is working on a line of summer dresses.

Lisa Versacio, who created West Elm for Williams-Sonoma, now runs a design business called Brocade. At Limelight Marketplace, she’ll open a unit on the street of shops and a 1,500-square-foot space on the second floor with a main room and smaller, uniquely decorated rooms. “I don’t think there’s been something different and unique in New York for a while,” she said. “It was definitely a risk. I loved the idea of doing this in this architecturally amazing space.”

Havaianas’ first U.S. kiosk is opening in the marketplace as well. A sampling of Havaianas’ 250 styles and colors will rotate through the kiosk every week. “I first saw the renderings of [the mall] and it looked a little like the old Henri Bendel,” said Rachel Greenstein, marketing manager. Havaianas sells sandals with pin embellishments for $30, hand-sewn Crystallized-Swarovski Elements for $148 and custom-made sandals for $25. The custom service will be available on weekends.

Hunter Boots’ first retail venture worldwide is opening in the marketplace. “We saw it as an incredible opportunity to have a pop-up concept and reach our customers,” said Kirsten Hardigg, executive director of sales at Hunter. “There’s a synergy between the brands they’ve brought on board. We want to present the true Hunter lifestyle. We’re doing handbags, a leather boot collection and hats and scarves.”

Beauty and fragrances will be sold at the second-floor apothecary room with black lacquer and mirrored fixtures and counters for Caswell-Massey, Om Aroma & Co., Cosmé Proud and Sue Devitt. Avery Perfumes, whose store in London’s Mayfair is bowing this summer, will launch its first U.S. showcase at the Limelight. Avery specializes in unusual scents such as Carthusia, developed in 1380.

Eli Akiba was planning to open one store at Limelight. “When I saw the magnitude of the project I decided to open three stores,” he said. “This is the best project that’s happened in New York in a long time.” His stores are: T Time, a T-shirt shop that will open on the main floor; LuLu, which will offer J Brand, Citizens for Humanity, Seven For All Mankind and Rock Star jeans, along with footwear from John Galliano, Alessandro Dell’Acqua and Creative Recreation on the second level, and LuLu’s men’s outpost, also on the second floor, which will sell Ralph Lauren, Scotch & Soda and Superdry.

“The project is beyond my expectations,” Menashe said. “The tenant roster is above and beyond.”