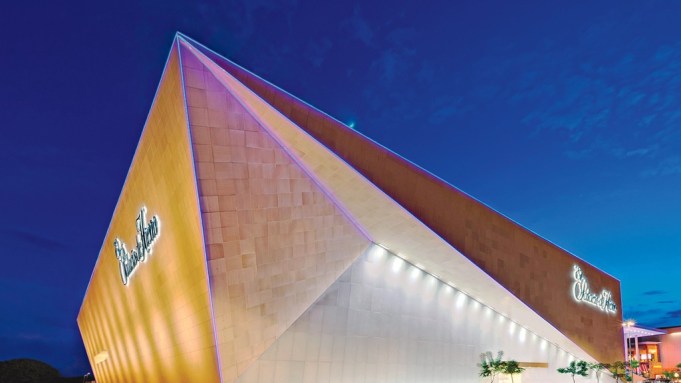 El Palacio de Hierro two years ago set for itself the lofty goal of reinventing the department store.

Other retailers had tried before, with varying degrees of success. Most fell back on tried-and-true department store retailing tenets, such as always positioning beauty, accessories and jewelry on the ground floor and using typical vendor-designed in-store shops in apparel departments.

El Palacio has been chipping away at some of this conventional wisdom.

TPG Architecture, one of two firms selected by El Palacio to reinvent its stores, was tasked with building a new store, Palacio Villahermosa in the state of Tabasco, Mexico, and giving it all the novelty the company wanted. The 210,000-square-foot store, which opened in October 2012, has a completely new design, said Alec Zaballero, principal, and managing director of TPG and its retail studio.

The firm is now working on designing a new store in Veracruz. “Each of these sites is in a different city, and each footprint is very different,” Zaballero said. “[Palacio Villahermosa] is its own flagship.” While TPG was charged with building a prototype, “we’ll customize each store moving forward to some degree,” Zaballero said.

TPG was asked to do away with the old-school department store open racetrack design, “a model that’s even being abandoned by American stores. Look at Bloomingdale’s SoHo,” he said of the retailer’s downtown store, which broke many rules.

TPG’s answer to reinventing the department store was to create 32 design concepts, each of them a separate room.

“It’s like Harrods, where you go from hall to hall,” Zaballero said. “We said, ‘Let’s take that idea and really loosen it up.’ We took the city plan of Paris and combined it with the floor plan of Harrods to create individual rooms that represent a single department and provide the sight lines that draw you into the next room.”

The ground floor of Palacio Villahermosa consists of organic shapes clustered around a central atrium. On the second floor, the atrium is surrounded by hard shops for luxury brands such as Louis Vuitton, Gucci and Ferragamo. “That’s a real rethink,” Zaballero said. “It’s not a shop-in-shop, it’s not a pad. It’s a magnet [that draws consumers] to the space. This is pretty strategic because it works for everyone. It works for Palacio because this is the product their clients want. It works for brands because they can maintain control of their brand identity. They’re able to drop in a full store concept.”

The facades of the shops are designed by each luxury brand, conforming to their global design. “It’s like walking into a little high-end mall and seeing everyone’s storefronts,” Zaballero said. “We created a model where luxury retailers can express their brand presence, including with their own storefronts.”

TPG is working on bigger footprints that include gourmet departments, cafés and restaurants, what Zaballero called the “Eataly effect.”

“Eataly is so energetic because of the multiple uses,” he said of the popular New York specialty food store with multiple restaurants, a green grocer and coffee bars, which TPG designed. “We’re putting in amenities like cafés, giving clients reasons to linger. We’re creating some places where you can park your husband.”

“They wanted to create a world premiere luxury destination in the heart of Mexico City,” said Robin Klehr Avia, chairman and regional managing principal. “They saw this as a place where one could find all the major global brands with a sense of luxury and democratic luxury.”

John Bricker, principal and creative director, said, “We’re developing the persona of the customer base in Mexico. We used it as a foundation of design. We considered the luxury customer down to the family that would go to the store on the weekend. Ultimately, it will become a tourist spot because it will be one of the largest destinations in Latin America and is in the heart of the nicest area of Mexico City, Polanco.”

“As of two months ago, we have an office there, and are dedicated to building a strong architecture and design presence,” Klehr Avia said.

The real focus of the project is creating a luxury world. “All luxury brands we know and love will be present there,” she added. “Creating this as a destination is not so much about a department store, but a place where people” want to go and spend time.

Consumers will be enticed to linger at El Palacio through what the architects call Palacio Moments, vignettes that enhance the shopping experience, from concierge service and lounge areas to a diverse assortment of traditional restaurants and cafés and quick coffee-based ideas. But, Bricker stressed, “There will be access to alternative experiences beyond coffee.”

Carlos Salcido, creative director of El Palacio, said the retailer currently operates cafeterias in some of its stores. Now, there will be Champagne bars, small bistros and Nespresso bars near luxury brands.

“We’re trying to sprinkle those moments all over the stores,” Salcido said. “Some of the restaurants will be outside. Most of them will be on the second floor. We’ll have a big gourmet restaurant with a terrace. Today we have the Palacio cafeteria. We’re moving one step further in Polanco to give shoppers a gastronomic experience. We’re even talking to top chefs.”

“Innovation is a hallmark of the brand,” said Michael Gatti, studio director of Gensler. “We’re developing a look and feel based on the amazing craftsmanship of Mexico. There’s quality in the craft of things. We’re looking at creative ideas where we’ll collaborate with local craftsman to do site-specific pieces. We’re going to mix upscale and unexpected materials and finishes” for an effect that’s not what a traditional department store looks like. “We’re using stone and a lot warm palettes.”

Gatti pointed out that light has been an influence on the design.

“There’s always a level of light accessibility,” he said. “The quality of light [in Mexico City] is spectacular. Light will play a major part in terms of this design. The building takes up a city block. There will be outdoor spaces as well as light filtering through the building and skylights. Also, we’ll be integrating elements of water and elements of interior landscaping into the store. I describe Mexico City as a series of parks. We’ll have terraces with restaurants or lounges. Nature is a fundamental inspiration, and we’ll be interpreting that in an interesting way.”

El Palacio’s Salcido said, “We try to move away from the typical department store layout. The [Polanco] store is more about concept than departments. We have a way of decorating the store. We like to call them worlds, such as men’s world, contemporary world, world of sport and intimate world for women.”

Bricker noted that because of the challenge to break new ground, “all eyes are on this project. Also, because of its scale and size. It’s the first department store in Mexico, built 125 years ago. We feel it’s going to be an important solution. The fact that the brand has history means it has authenticity. But there will be no direct cliché nods to the past. Because in the name El Palacio de Hierro, the word hierro means iron, we will be using iron and metal and different types of metals to harken back.”

On a more contemporary note, he added, “We’re leveraging style service and quality, which El Palacio de Hierro stands for.”

Luxury shoppers are the same throughout the world in that they want exclusive products and special service. The Mexican customer, however, is more social, travels in groups and cares more about social experiences than service. “We are thinking about having VIP locations for our big spenders and cardholders,” said Salcido. “We’re setting a higher benchmark.”

“Our design needs to accommodate enhancing the purchasing experience and socializing,” said Bricker. “Social media is a big part of the communications strategy. We’re strategically integrating technology throughout the stores, but we’re not putting in technology for technology’s sake. We’re integrating it into the architecture.”

Both groups of architects are working to give consumers every creature comfort they could imagine during a shopping excursion. Zaballero said cosmetics departments operate mini spas offering treatments. El Palacio also operates a full-service travel agency near the luggage department, should shoppers feel the urge to book a trip. Insurance is also sold in the store.

“It means, ‘My whole lifestyle is in this one store,’” Zaballero said.