Rent the Runway web site is stocking up, staffing up and has relocated to a 9,000-square-foot headquarters in New York’s TriBeCa. 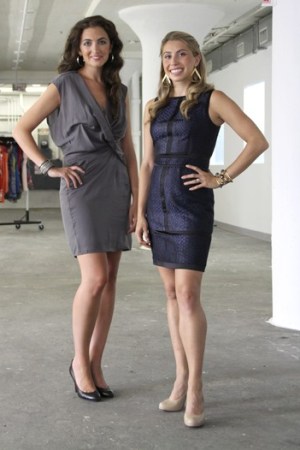 Rent the Runway is stocking up, staffing up and has relocated to a 9,000-square-foot headquarters in New York’s TriBeCa.

This story first appeared in the July 19, 2010 issue of WWD. Subscribe Today.

“It’s a dream come true,” said Jennifer Hyman, chief executive officer and co-founder of Rent the Runway, during an interview where she and co-founder-president Jennifer Fleiss talked excitedly about the business and its new headquarters, 163 Varick St., a former print shop. It serves as Rent the Runway’s administrative offices and distribution facility where merchandise is stored, picked, packed and shipped to customers in garment bags. Before, the setup was humble — a small office and some shared space in a dry cleaners where the merchandise was inspected, cleaned, repaired, stored and then shipped out when ordered.

Although clothing rental operations have had mixed success and get greeted by the industry with skepticism, Hyman and Fleiss emphasized that designers and consumers believe in their business model. They said that since the launch, Rent the Runway has attained 500,000 members, adds 20,000 new members per week on average with little marketing and features products from 100 designers. The site will double the number of items offered for fall by boosting the buy from labels such as Proenza Schouler, Matthew Williamson, Janis Savitt, Subversive and Kenneth Jay Lane, and by adding Calvin Klein, Nina Ricci, Missoni, Moschino, Alberta Ferretti, Judith Leiber and Preen. So far almost 18,000 dresses have been rented. The company isn’t expecting profits for a while, but Hyman and Fleiss, both former Harvard Business School students owning the majority stake in the business, estimate $6 million in 2010 revenues and over $20 million in sales in 2011.

They also believe that in an age of austerity, women are more inclined to rent a dress than in the past, particularly if it’s for a special occasion and might never be worn again. “We have seen extraordinary loyalty from our members. Once a woman rents, she tends to come back for many special occasions in her life,” Hyman said.

“We only buy current season collections from our designers,” said Fleiss. “We go in just like any other buyers and we pick a portfolio from that designer. Our buy differs from the department stores because we focus on the more editorial, embellished, fashion-forward, colorful styles. We don’t pick the little black dress. Almost every dress on our site has something unique and special about it.”

The team has grown to 30 full-time and 10 part-time employees, and includes technology and marketing executives, stylists and a customer-insight group. In the past two months, a chief technology officer from eBay and vice presidents of analytics and operations from Amazon and Oracle came on board. There are also four buyers and four assistant buyers for dresses, accessories, jewelry, bridesmaids, as well as the college market, which alone represents 20 percent of the users.

Belts and scarves are expected to be added to the offering, and shoes and maternitywear are being considered. The opening price to rent a dress is $50, which corresponds to a $500 item. The company promises same-day delivery in New York City and next-day delivery for the rest of the country. Women can hang on to the garment for four or eight days. They receive the same style in two sizes to raise the chance of a proper fit. The second garment is free. The goods are delivered with a pre-stamped package that can be dropped in a mailbox for return. Women can also rent a second style for $25 on the same order and it doesn’t have to be from the same designer.

One of the big questions initially was whether women would take care of the dresses so others could rent them. “We ran several tests and discovered that when people get access to something that is aspirational to them, they tend to treat it better,” Hyman said. “Out of over 15,000 dresses that we have rented out, literally only one has come back in a state where we couldn’t use it again. So with the rest of the dresses there might be a slight stain that we are able to get out or a slight rip that we are able to tailor. We use a luxury eco-friendly dry cleaner [Slate], and we have a garment preservationist [Jaclyn Lerner] who has a master’s degree in textile preservation, so when the garment comes back it’s given a full quality inspection to figure out how to present this in a brand-new fashion.”

“There was a lot of fear when we were initially approaching designers about retail cannibalization, that the bread and butter for all these designers was selling to department and specialty stores,” Hyman acknowledged. “But we were committed to building a business that introduces the next generation of women to designer brands. It’s a huge customer-acquisition play and marketing play for our brands, and I think the data kind of speaks louder than words. Ninety-eight percent of women who use Rent the Runway rent a brand they never owned before, and 90 percent report purchasing something from the brand they rented from. Rent the Runway is a true gateway to retail.”

Hyman also said her company seeks to develop “partnerships” with brands in different ways. “We will launch marketing communications that drive traffic to their e-commerce sites. We will work with brands when they are launching their own retail stores. We are not trying to replace shopping. We actually founded this business because we are two women who love shopping. We are trying to enable women to have access to brands they never thought they would have before. If I’m a girl who has contemporary clothing, I will use Rent the Runway to rent a designer dress and wear it for the first time.”

The co-founders say other apparel-rental businesses are different. “We only work directly with designers and never put something on our site unless the designer has fully given us only the buy, their permission, their blessing,” said Fleiss.

Another point of distinction: “We only put current-season merchandise on the site, because we are trying to educate women about the brand and show the real representation of that brand,” Hyman said. “Yes, there have been dozens of copycat businesses since we launched, but none of them are buying directly from designers and none of them have a large selection. We will buy 150 to 200 units in our top styles. We have about 10,000 units in inventory now, between dresses and accessories. Coming in between July and September are an additional 8,000 units of dresses and another 2,500 units of accessories. We are doubling the inventory we have to 20,000 units.

“Because our system works like a hotel reservation calendar,” she said, “women are booking up to six months in advance. Once the date is selected, the site indicates which dresses in what sizes are available for that date.

“We are trying to train women on new-customer behavior.”