The new Malibu Lumber Yard, a shopping plaza for the beach-chic community, is part of a move toward well-known brands. 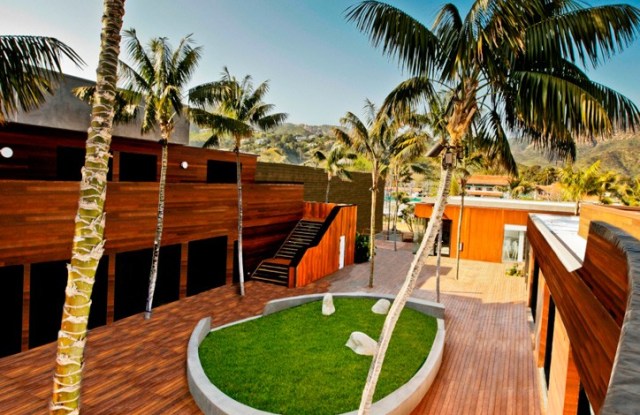 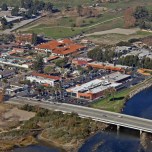 The Malibu Lumber Yard, a 30,000-square-foot outdoor shopping plaza in the beach-chic community of Malibu, Calif., which launched Saturday — with a gaudier opening Tuesday — is a harbinger of major changes in local retailing.

The $30 million project, built on city-owned land that had been a lumberyard, has attracted tenants such as Tory Burch, Maxfield, Alice + Olivia, James Perse and J. Crew and is one element of a larger shift taking shape in the colony of wealth, celebrity and surf on the Pacific Ocean. Despite the recession and its mounting toll on specialty retailers, the new wave is making Malibu a destination for well-known fashion brands that are replacing mom-and-pop businesses and displeasing some residents.

The next big piece of the puzzle, just across the road from the Lumber Yard, is Malibu Village at Cross Creek Road, a 52,000-square-foot retail center slated for a major overhaul starting in May with new tenants such as Missoni, True Religion, Kitson and American Apparel replacing pet and picture-framing stores and a real estate office.

In addition, there are plans to expand the Trancas Country Market by more than 37,000 square feet, with new retail space and two parking lots, though developers have said they’re looking for local brands.

Malibu’s retail refashioning got under way several years ago, when Lumber Yard co-owners Richard Sperber and Richard Weintraub bid for and won a city deal to develop the first ground-up commercial project approved by the city in about 18 years. They signed a 55-year lease with the City of Malibu in 2006 — before the start of the recession — requiring them to pay almost $1 million a year to the municipality. The developers encountered about eight months of delays because of squabbles with the regional water quality control board, eventually paying $3.5 million to construct a water treatment facility for the area.

The owners said they’ve sought an appropriate retail mix and were required to allocate 3,000 square feet to small local retailers at reduced rents.

“We really try to keep away from LVMH brands and the Gucci Group; we want great brands that are more accessible,” said Weintraub, a Malibu resident. “The tenants are nervous, times are tough. But if someone in Malibu has $500 to spend, they’re more likely to spend the money here rather than drive to stores” on Robertson Boulevard in Los Angeles.

Jay Luchs, the commercial real estate broker behind much of the area’s leasing — including the entire Lumber Yard — is a partner in Malibu Village, which has 20 retail spaces, two restaurant locations with coveted liquor licenses and parking for 300-plus cars.

“We’re really aiming for a mix of existing local tenants that are popular with residents — it’s where the residents have come for years,” he said.

The center once owned by actors Harrison Ford and Tom Selleck and formerly known as Cross Creek Plaza, Malibu Village will get a multimillion-dollar overhaul starting next month to give the center a rustic, beach-country appearance. Some new tenants will be in the center by September, when the work is scheduled for completion.

The actors sold the property in 1991 to real estate mogul Steve Soboroff for less than $10 million, who sold to current owners Michael Shabani and Pouya Abdi for more than $60 million in October 2007.

Among the new tenants, Missoni is to open its store by the fall, around the same time as True Religion. Chef Philippe Chow is in talks to open a restaurant.

“The whole retail area along Cross Creek Road is reaching critical mass and should be a go-to spot for the locals and weekend visitors alike,” Luchs said. “Even with the downturn, it’s got great demographics and stable year-round traffic.”

Rents in the area aren’t cheap — between $15 and $20 a square foot — and tenants aren’t exactly expecting big sales numbers from the new stores.

“We’re not at all superpsyched about opening a store in retail right now but have adjusted sales plans and will see how we do out there,” said Alice + Olivia founder Stacey Bendet, who noted the brand has slashed its overall sales forecast, including original estimates for Malibu, by 20 percent. “It’s a special area, and I think we have a shopper there. We’ve flatlined a little, so there’s no place to go but up.”

While still a part of commercial expansion in Malibu, the Trancas plans — to be weighed by Malibu’s planning commission on May 5 — have been cast by ownership as a way to retain Malibu retailers displaced by rising rents at other centers.

“We’re definitely targeting local customers that shop on the west end of Malibu,” said Dan Bercu, a Malibu resident and co-owner of the property, with developer Jim Rosenfield and a pension fund. “It’s really for the local owner-operated stores that can’t afford the higher rents.”

Unlike the Lumber Yard, Trancas’ land isn’t city-owned, which could exacerbate red-tape delays, drive up rents and jeopardize the intended local flavor.

“Land is scarce here,” Bercu said. “It takes so long to get anything done that it becomes expensive and only big brands can afford it — we’re trying to buck that trend.”