Deborah Weinswig of Coresight Research and Jill Standish of Accenture say not just department stores, but "most retailers" are at risk.

What’s the future of traditional department stores? According to several retail analysts, the future is here and the sector’s next transformation is being driven by the resale market. Moreover, the impact of resale is broader than previously thought.

“This is a threat to most retailers, not only traditional department stores,” Deborah Weinswig, founder and chief executive officer of Coresight Research, said to WWD. Coresight Research released a report on the mainstreaming of apparel resale last week, concurring with the consumer penchant for the “treasure hunt shopping experience.”

Dressing in full resale regalia today may mean access to a distinctive wardrobe of desirable brands at value pricing. Weinswig cited the access to limited, one-of-each merchandising strategies as fodder for creating a sense of “urgency” which drives higher conversions and boosts total sales.

And in a time of retail store closures and waning foot traffic, to the tune of 5,524 U.S. store-closure announcements in 2018, tracked by Coresight Research — a conquerer’s approach to expanding square footage and opening new stores is no longer viable.

“Department stores need a reason for you to come back,” Andy Ruben, founder and ceo of Yerdle, an end-to-end tech and logistics platform, said to WWD. He added that e-commerce and mobile have changed the game, meaning “access” can no longer mean what it used to, and it’s no longer a competitive advantage.

“Access used to be a core vector that retail competed in: put stores everywhere to create a distribution of things that created traffic,” Ruben said. With the advent of the secondhand market and shifting consumer perceptions, “access” now more readily define a rotating wardrobe and the inclusion of aspirational brands that are now affordable in their lightly used or worn state.

Without the taboo of wearing used goods impeding new consumer adoption, the “flywheel” effect advances in full course, by aid of the sharing economy, and as some experts credit, luxury reseller The RealReal.

Speaking on The RealReal going public in June, Weinswig added, “We see the success of The RealReal as a catalyst and expect resale growth to outpace apparel industry growth by a factor of two to three times.”

In the second quarter of 2019, SimilarWeb, in partnership with WWD, found that the top-performing resale shopping sites by total traffic in the U.S. once again noted eBay at the top (1.96 billion visits), with Poshmark in second (51 million visits) and StockX (20.7 million visits) in third. 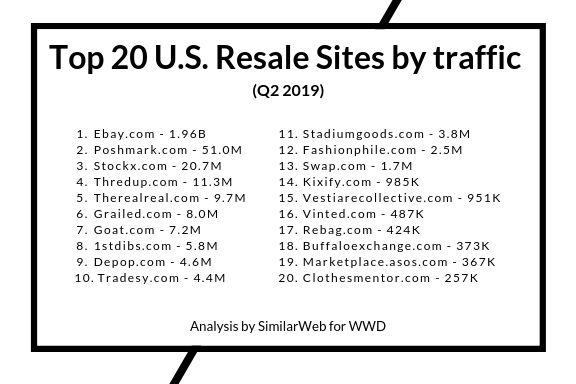 The top 20 resale sites by total traffic according to SimilarWeb for the second quarter.  WWD

Citing a recent report from Accenture Strategy and Fashion for Good, Jill Standish, senior managing director and head of retail at Accenture, found that circular business models can be financially viable for retailers, but especially for those in the higher-priced segments — and she also outlined the risks.

“The dominance of independent platforms and start-ups creates risk for established retailers and department stores in terms of garment authentication and quality,” Standish told WWD.

One scenario is when the student becomes the teacher. By nature of their business, luxury marketplaces such as Fashionphile, The RealReal, StockX, Rebag and others have had to ensure their methods of authentication — including their experts — are trusted and scalable at the pace of, and ahead of, their own community growth. With new third-parties of authentication maturing, the threat may be targeted at the first-line of brands, department stores, retailers and off-pricers. (T.J. Maxx sells high-end designers without the traditional markup.) For the average store associate in the U.S. who makes $11.70 per hour, according to Indeed — authentication is understandably above their pay grades.

Own the Channel Early

“Given investor interest in the model and the fact that the category is expanding at 5-times overall apparel sales we expect other major fashion brands to enter the fray,” Standish said.

As is true for all e-commerce business, minimizing logistics costs is crucial to profitability. “If logistics costs are reduced close to zero, there is a huge impact on the financial viability of re-commerce across all segments, particularly in the mid-market and premium segments,” Standish said. “In both cases, re-commerce margins increase to between 45 to 50 percent and exceed the margin in luxury,” she added.

Pointing to the oft-cited ThredUp projections with resale being a $51 billion market by 2023, re-commerce is what Standish cites as “the most mature circular business model in fashion today,” adding that these models will have a “big role to play in ensuring the sustainable transformation of the fashion industry.”

Standish’s advice is for retailers to understand the impact of circular businesses now, in order to “future proof their businesses and remain competitive.”

As eBay Dominates Resale Web Traffic for May, These Sites Are Gaining Ground