After decades of being in Palm Springs' glitzy shadow, retailing in California's Coachella Valley is emerging from its underdog status. 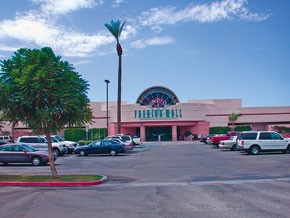 After decades of being in Palm Springs’ glitzy shadow, retailing in California’s Coachella Valley is emerging from its underdog status.

What began as a retail building boom in La Quinta, a city in the foothills of the Santa Rosa Mountains about 20 miles southeast of Palm Springs, is extending into nearby desert communities such as Indio and Coachella, which are roughly 120 miles east of Los Angeles.

Retailers are playing catch-up with the changing demands of the entire Valley, once primarily a seasonal vacation and retirement mecca of nine cities whose permanent population — families drawn by more affordable housing — has swelled to about 430,000 people, including Palm Springs, which is a 35 percent increase since the 2000 census, according to Wheeler’s Market Intelligence, a local marketing research firm.

These communities are rebranding themselves with fresher personas to help capture investment dollars. Indio’s slogan is “Indio, the place to be!” and Coachella’s circular logo on the city Web site depicts a serene landscape with snow-capped mountains, a palm tree and a lake, along with grapes and lemons in a nod to its agricultural heritage.

“Places like Indio and Coachella will be able to change their image because significant change is going on in who lives there,” said John Husing, economic consultant to the Coachella Valley Economic Partnership. “When communities go through that, they can go through a metamorphosis.”

Such change translates into rapid growth. In Indio, since 2004, for example, more than 5,150 residential units have been built in tract communities, mainly in north Indio, but some in the southern part of the city with prices ranging from $300,000 to as much as $2 million.

Real estate has helped fuel Indio’s population explosion, which jumped 28 percent from 49,119 residents in 2000 to 76,896 residents in 2006, statistics show. Palm Springs’ population in the same period increased 11.8 percent to 47,806 residents. While the heady days of real estate sales have subsided, the city is by no means suffering a hangover. Developers are still erecting more housing in Indio, such as the Hofmann Co., which is building the Plantation at Polo, south of Interstate 10, consisting of 770 homes, with the first phase ready for sale in February, priced from roughly $350,000 to $450,000.

New homeowners soon will find places to shop. About 750,000 square feet of retail development is under way in Indio, including a Target and Home Depot. Wal-Mart also is considering a store in the vicinity. Another 1.3 million square feet is in the planning stages, which includes invigorating the downtown core by creating a theater district with an eclectic mix of stores and shoring up the Indio Fashion Mall, a mid-Seventies shopping complex located at one of the city’s busiest intersections, Highway 111 and Monroe Street.

“Every major retailer has expressed interest in coming here,” said Mark Wasserman, assistant to the city manager of Indio. “The greatest need for retail is on the north side where there are no services, no restaurants, no drugstores. As a city, we have tremendous leakage to other cities.”

Even with a Supercenter in nearby La Quinta, Wal-Mart said it’s still looking for “opportunities to provide more convenience to customers,” said John Mendez, a spokesman. “Many customers would prefer a convenient place to shop if they’re in Indio. That’s the way we look at it.”

Perhaps the project with the highest stakes is located where date trees now grow at Highway 111 and Shields Road near La Quinta’s city limits. The $400 million Polo Square project from La Quinta developer William Swank, which has secured $60 million in financing from a consortium of South Korean investors, includes 350,000 square feet of retail space, about 450 condominiums and two hotels. A 2008 groundbreaking is planned.

Indio’s journey, however, has had some detours.

Malibu, Calif.-based developer Richard Weintraub, who bought the Indio Fashion Mall in 2003 and planned to spend $10 million to $20 million updating it with teen-oriented stores such as Abercrombie & Fitch and Old Navy, put plans on hold as the city tried to buy surrounding land for the expansion. Now the 248,339-square-foot mall is up for sale. Weintraub also filed a lawsuit against the city’s involvement in his planned 170-acre mixed-use development, alleging the city was fast-tracking other projects before his own. The suit was settled in the summer and the project is moving ahead.

In response to Weintraub, assistant city manager Wasserman said: “We have streamlined the development process to make it easier.”

The city of Coachella, a rural community in the easternmost part of the Valley, has been adding about 1,000 homes a year, averaging $300,000. As a result, its population has soared 69 percent to 38,486 residents since 2000, and developers have taken notice. The city has added about 334,000 square feet of grocery-anchored retail development.

On the way is Wal-Mart Market, the discounter’s first grocery-only unit in California. Tesco also will be unveiling its new prototype, called Fresh & Easy. And that’s not enough, said Lorie Williams, economic development manager for Coachella.

“We’re looking for allover retailers like a Target, Kohl’s or a Marshall’s that can provide apparel and other needs,” said Williams, noting that Coachella city officials attended the International Council of Shopping Centers Western Division Conference in September. “We think it’s important to get the right mix. We need to diversify so people don’t have to leave the area for anything.”

La Quinta has a head start on its neighbors when it comes to retail, with taxable sales vaulting 86 percent from $389.4 million in 2003 to $724.6 million in 2006 after the opening of California’s first Wal-Mart Supercenter in 2004, followed by national chains such as Costco, Target, Kohl’s and Stein Mart.

More retail opportunities are on the way. Almost three years ago, a championship golf course opened as part of the $81 million first phase of the SilverRock Resort in the central part of the city. Lowe Enterprises will be developing a 200-unit boutique hotel at SilverRock, and future development calls for a second hotel accompanied by 81,000 square feet of retail space.

But retail growth in the Valley isn’t all about big-box development. Specialty stores may fill in the gaps, from upscale clothing to unique gift items, developers and government officials said.

The Indio Municipal Golf Course could become a neighbor to The Shops at the Greens, an 83,657-square-foot complex proposed by the Foundation Group in Newport Beach, Calif. The project aims to serve the après-golf crowd with sit-down dining, a bank and possibly clothing and footwear retailers.

“This is a quaint, adorable area that has potential, and I see big things happening for it,” said Margo Lisk, owner of Tink, who worked for Lisa Kline on Robertson Boulevard in Los Angeles.

So far, the Old Town retail project, which is owned by developer Wells Marvin and located near some of the region’s most expensive homes in gated country clubs such as PGA West, has had mixed results with some turnover and spotty traffic.

“We still struggle with the summer months since some of the mom-and-pops are undercapitalized, but we’re encouraged by the earlier uptick in traffic this year,” said Leslie Locken, leasing and property manager for Old Town. “We’re looking for stores like Chico’s, White House|Black Market and maybe a national gourmet grocer.”

Tiny Indian Wells, home to one of the highest median incomes in the country at $93,986, with a population that’s grown 31 percent since 2000 to 5,015, is jumping on the building bandwagon with a proposed 22.5-acre shopping center about 5 miles west of I-10. The mixed-use development will include a hotel and spa, 257 high-end condos, 300,000 square feet of retail and a movie theater.

“The strong demos of Indian Wells and the need for high-end resources out there makes this a really strong development opportunity,” said Nicole Vollenweider, office manager of Irvine, Calif.-based Sanderson J. Ray, developer for the project.

For the area’s newest residents, the expanded range of retail choices is coming none too soon. Since buying a three-bedroom home in north Indio in December 2005, Larry Bohannan has been shopping in Palm Desert, which is 8 miles away.

“The idea that Indio can bring in a high-end complex and turn the west side of Indio into a destination spot is impressive,” said Bohannan, a golf columnist for the Valley’s Desert Sun newspaper. “You realize that they really can change the image of Indio and get it to be seen in the same light as the rest of the Valley.”