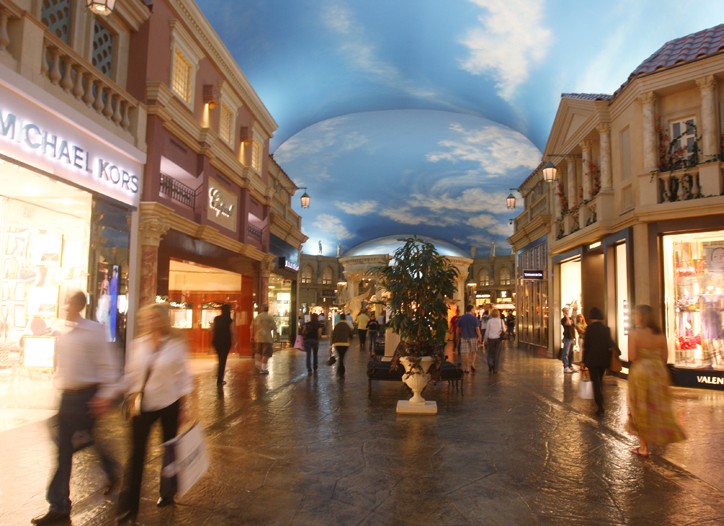 LAS VEGAS — A long winning streak could be ending for retailers here, marking a new phase in the city’s evolution.

Reduced discretionary spending — the foundation of the entertainment, gambling and shopping mecca — is causing pain from the cash registers to the casinos with no quick end in sight.

“We’ve certainly revised our sales forecast for the coming year; we don’t want to overestimate anything now,” said Robert Chavez, chief executive officer of Hermès USA, which recently opened its second Las Vegas boutique in the Encore at the Wynn Las Vegas hotel-casino.

The area’s retail vacancy and jobless rates have almost doubled in the last year, and gaming revenue, tourism and convention business are spiraling downward. In addition, Las Vegas has the nation’s highest foreclosure rate for metro areas with a population of at least 200,000, according to RealtyTrac, which compiles the listings.

Major projects such as CityCenter, a joint venture of MGM Mirage and Dubai World that includes hotels, gaming and condominiums, as well as retail, are being cut back or delayed.

MGM Mirage, the largest casino owner on the famed Strip, is trying to avoid default and other casino operators, including Harrah’s Entertainment and Las Vegas Sands, are struggling to meet debt obligations. General Growth Properties Inc., which owns and manages more than 200 U.S. malls, including Las Vegas’ Fashion Show, Grand Canal Shoppes at The Venetian and The Shoppes at The Palazzo, said Monday it is continuing talks with lenders to restructure billions of dollars in debt. General Growth is seeking to sell the Las Vegas properties, but with real estate credit tight and spending weak unloading them may be a longshot.

Mall landlords are reexamining their tenant rosters to be recession-appropriate. The Forum Shops at Caesars, which has set the standard for high-end retailing in Las Vegas, is now more interested in signing a casual eatery than a fine-dining restaurant because of the strained economic climate, said Maureen Crampton, director of marketing.

“The shopper is more conservative today, definitely, and they have been for quite some time,” she said. “We have to be realistic. We can’t set our expectations so high. This is not 9/11. People after 9/11 came to get away. It didn’t hit their pocketbook.”

Welcome to the Las Vegas where cheap buffets, half-price hotel rooms, steep store discounts, budget-friendly shows and slots are among the main attractions, while luxury brands that have catered to high rollers play second banana.

In the last 15 years, Las Vegas morphed from its roots as a gambling oasis into a luxury destination with world-class shopping, spas, restaurants and other attractions. After more than a decade of riding high, the economic turmoil has stripped away some of the city’s extravagant allure.

Luxury brands such as Bally, Chanel, Hermès, Louis Vuitton and Tiffany & Co. that have opened multiple locations along the Strip are taking the long-term view.

“It’s a little too early to tell what’s in store for Vegas,” said Barbara Cirkva, Chanel’s division president of fashion, watches and fine jewelry, who added that the brand has “started to take a very conservative approach” to Vegas and most other retail markets. Chanel opened its third Las Vegas boutique in Wynn’s Encore in December.

The 1.7-million-square-foot, 70-acre CityCenter development — which will cost MGM Mirage, controlled by investor Kirk Kerkorian and Dubai World an estimated $9.6 billion to $11.3 billion — is seen by many as a harbinger. Since it broke ground in 2006, the project has been delayed and scaled back, as with the cancellation of the condominium portion of the Harmon hotel.

MGM Mirage last week staved off bankruptcy of CityCenter, putting up $200 million to continue construction. CityCenter isn’t out of the financial woods, however. MGM Mirage and Dubai World still must come up with $800 million to access some $1.8 billion in credit needed for completion.

“Of course we’re worried about the economy, and the [CityCenter] delays have been troubling, but Las Vegas has been one of the top markets for us over the past year,” Bally ceo Marco Franchini said of his plans to open a third Las Vegas boutique at CityCenter. “We’re not going to be sidetracked. Of course, we’re going to be careful and have to allow the market more time.”

Italian fashion label Missoni was in negotiations to open its first Las Vegas door in CityCenter’s luxury retail complex but pulled out when the economy skidded last year, a company spokeswoman said.

“Las Vegas is having trouble but so is the rest of the retail world,” Franchini said. “Our intent is to be cautious but still to pursue our long-term retail strategy of expansion. There are some opportunities in this down market.”

Although Federal Reserve chairman Ben Bernanke said in March that the recession will end “probably this year” and the economy will begin to recover in 2010, Las Vegas faces lengthening odds as luxury spending, tourism and gambling prove difficult sells.

“As recently as a year and a half ago, the conventional wisdom was that the gaming industry, and the Strip in particular, would be pretty immune to a slowdown in the economy,” said Matthew Jacob, a director at New York-based Majestic Research. “The nature of Las Vegas has changed.…If you look at all the hotels that have been built since the early Nineties, they are each more upscale than the last and are attracting people that are upscale or aspire to be upscale. There are fewer people that fit that category now than a year ago.”

Total visitor volume was down 4.4 percent last year to 37.5 million and is forecast to decline 10 percent this year, according to the Las Vegas Convention and Visitors Authority. In January, tourism fell 11.9 percent year-over-year to almost 2.8 million.

Gaming revenue for the Strip decreased 10.6 percent to $6.12 billion in 2008, and convention attendance was down 5 percent to almost 5.9 million. The number of conventions and meetings fell 5.8 percent to 22,454.

To be sure, Las Vegas remains a potent engine for revenue. Las Vegas Boulevard is filled with foreign tourists snapping photos and T-shirt-wearing Americans carrying alcoholic concoctions in yard-long glasses.

With the nadir of the recession undetermined, deep discounting could damage the city’s reputation as a high-end retail destination.

“It took quite a while for Vegas to shed its negative reputation, and it has taken great strides to position itself as a really reputable place to do business,” Jacob said. “Anything that reverses that may be difficult to quickly rebound from.”

Las Vegas’ leap toward luxury retail took root in the Nineties, most notably with the opening of the Forum Shops at Caesars Palace, a record-setting, high-end retail development of 160-plus stores. The Forum Shops expanded three times during its first 12 years and recorded average sales of almost $1,400 a square foot in 2006. By 2008, the number had dropped to around $1,200 — still far greater than the national average of about $400 a square foot. Some brands operating in the Wynn’s shops, which analysts estimated saw almost $300 million in retail sales in 2007, said they don’t expect stores to match those numbers in 2008 and possibly beyond.

Las Vegas casino-hotels and retailers have the added challenge of competing in a crowded market. Projects already under way will add an estimated 10 percent to the current hotel room inventory of 140,529.

“It seems to be the worst possible time to be opening up a new casino,” said Jacob of Majestic Research. “We are seeing more supply being added, and demand is not going up, demand is going down. The brand-new properties have to discount off the bat.”

The Octavius Tower, part of Harrah’s $1 billion expansion for Caesars Palace, stalled in January; Boyd Gaming’s planned $5 billion Echelon resort, a 23-story tower that had a 300,000-square-foot shopping venue, has been delayed at least a year.

Los Angeles nightlife impresario Sam Nazarian’s plans to overhaul the former Sahara hotel and casino are also on hold. He bought the site in 2007 and has already poured millions into remodeling the property.

To cope with the weakened tourism market, Strip retailers are trying to compensate by attracting locals and midrange shoppers.

The 700,000-square-foot Tivoli Village, a mixed-use project under construction on Las Vegas’ west side, plans to draw heavily for customers from the nearby upper-middle-class suburb of Summerlin. The project was slated for fall 2009 but has been pushed back to 2010.

But Las Vegas-area “residents are not able to support local retail in the manner they were six to 18 months ago,” said Russ Joyner, general manager of Miracle Mile Shops at Planet Hollywood, which houses 170 stores, including Sephora, H&M, Chico’s, Metropark and Ann Taylor Loft.

“It’s a matter of discretionary income — luxury items are increasingly out of reach,” Joyner said. “We’re not trying to go too high-end or luxury, so we have what most of the mass market is looking for. We started out 2008 like gangbusters, and in the fourth quarter came to a screeching halt like everyone else.”