Companies are getting creative testing unorthodox collaborations, sponsorships and new consumer attractions to offset weakness at the core business.

Selling off real estate or divisions aside, retailers are increasingly seeking payback via unorthodox collaborations, sponsorships and by developing ancillary businesses. It’s a matter of pursuing out-of-the-box solutions to offset weakness at core operations, better the bottom line and respond to pressures to innovate.

Macy’s, for example, uses its Story format to tap brands, even competitors such as Dick’s Sporting Goods, for sponsorships. Kohl’s is testing health and wellness offerings from Weight Watchers and collecting fees from Amazon for utilizing stores as pickup and return points for Amazon packages. Kohl’s has even sold a small stake to the Seattle-based e-tail giant.

Costco has an array of services — from home insurance and identity protection to delivering bottled water — and at the Casper mattress store on Mercer Street in Manhattan, one can book a 45-minute nap for $25. 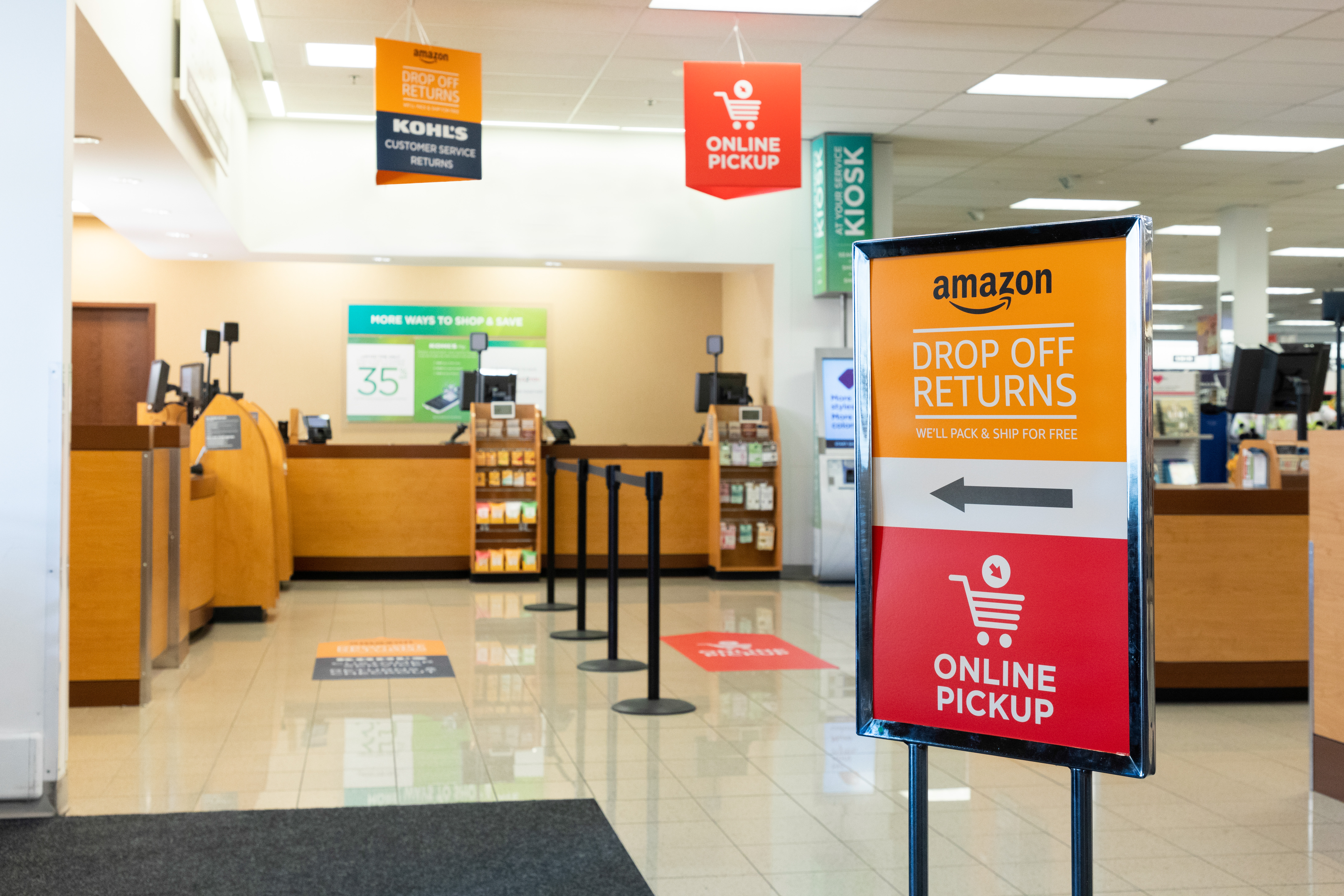 In an unusual partnership, shoppers can pick up and return Amazon packages at Kohl’s.  Courtesy Photo

“Neiman Marcus has a long history of establishing alternative revenue streams, including everything from spa services, salon services, travel services, flowers, bakery, food and drink, shoe repair, fur storage, rental with Rent the Runway, resale with The RealReal and Fashionphile, product personalization and ear-piercing,” said Jim Gold, the former president and chief merchandising officer of the Neiman Marcus Group. “Along the way we studied many other possibilities such as closet consultation and hotel and ship partnerships.”
The trend, Gold added, “will undoubtedly continue and intensify as large stores look for more ways to integrate their business into as many aspects of their client’s lifestyle as possible. These kinds of activities create a more relevant and dynamic customer experience, which serves to attract new clients and increase loyalty with existing ones.”

Two years ago, Saks Fifth Avenue’s windows in Manhattan took a curious turn when the retailer re-created a United Airlines jet and the interiors of the airline’s Polaris Business Class. The aeronautic tableau was dressed up with Saks’ branded bedding supplied to United and resort styles from such designers as Balenciaga and Gucci. In return, United gave a significant royalty to Saks — about $1 million for the windows, according to a source. “Saks has often used its windows to generate revenues,” the source said. The retailer got an even larger royalty for placing its logo-ed bedding in United’s business class, which the airline considered an image enhancer.

Earlier this year, Rachel Shechtman, the founder of Story which is owned by Macy’s, approached Macy’s chairman and chief executive officer Jeff Gennette with the Dick’s idea for Macy’s current “Outdoor Story” installation. Gennette questioned it at first. “I wouldn’t have thought about partnering with another retailer to sell outdoor products at Macy’s,” Gennette acknowledged. But after listening more to Shechtman about the merchandise, Gennette contacted Dick’s chairman and ceo Ed Stack. “He also saw the creative vision,” Gennette said, adding that a deal was struck and Dick’s merchandise was on the selling floor in two months. MiracleGro is also a sponsor for Macy’s “Outdoor Story,” and Crayola was among the sponsors at Macy’s inaugural Story presentation, “Color.” 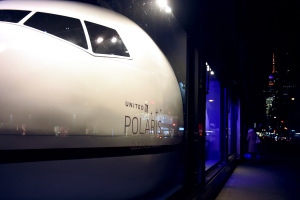 “Partnership marketing in its various forms can be highly lucrative and contribute not only to driving brand awareness and press but also to additional revenue streams. I am finding that many brands are just beginning to discover this and incorporate this strategy into their revenue model,” said Kathleen Ruiz, founder and ceo of KRW Consulting, an agency specializing in brand partnerships. Ruiz, formerly senior vice president of media and development for Hudson’s Bay Co., which owns Saks, was involved in forming the partnership between United and the retailer. She declined to discuss any financial terms of the deal.

“Negotiating terms and deliverables for both parties is key to creating a fully integrated and compelling campaign for shoppers through multiple marketing touch points,” Ruiz said. “In some cases, a portion of that sponsorship fee can help with the bottom line.”

Even if they don’t always get high marks for creative buying and merchandising, “retailers have been coming up with creative ways to offset just relying on their four-wall sales during store hours,” observed Melissa Gonzalez, ceo and founder of The Lionesque Group retail strategists. Gonzalez cited several instances of retailers coming up with new ideas, including DSW testing nail salons in select stores and CVS teaming with Glamsquad to provide hair and makeup services. “Collaborations are becoming more popular in retailing,” Gonzalez said.

Like Macy’s and Dick’s, Neiman’s and Fashionphile seem strange bedfellows. Neiman’s this year bought a minority interest in Fashionphile, which buys and sells used luxury handbags, jewelry and accessories. Neiman’s has drop-off points inside a few stores for Fashionphile. It’s not really a revenue stream since Neiman’s said isn’t selling Fashionphile goods, but it believes those who visit the drop-off sites might shop for new luxury goods elsewhere in the store.

It’s a matter of testing and learning, sometimes from mistakes — and taking lessons from Silicon Valley firms where the mantra is to iterate again and again, and if one fails, fail fast and move on. Seven years ago, Neiman’s and Target collaborated on a Christmas collection with CFDA designers sold at both stores. The results fell below expectations. So did the experiment with Rent the Runway, which opened and closed a shop inside Neiman’s in San Francisco.

Walmart, seeking to grow online sales, compete against Amazon and foster a fashion image, has been buying up web sites distinct from its principal discount business, including Jet.com, Bonobos, MooseJaw, ShoeBuy, Hayneedle, Eloquii and ModCloth. The strategy is said to be losing money yet also regarded as a fundamental and nimble shift in the business model to grow online sales and foster a fashion image. 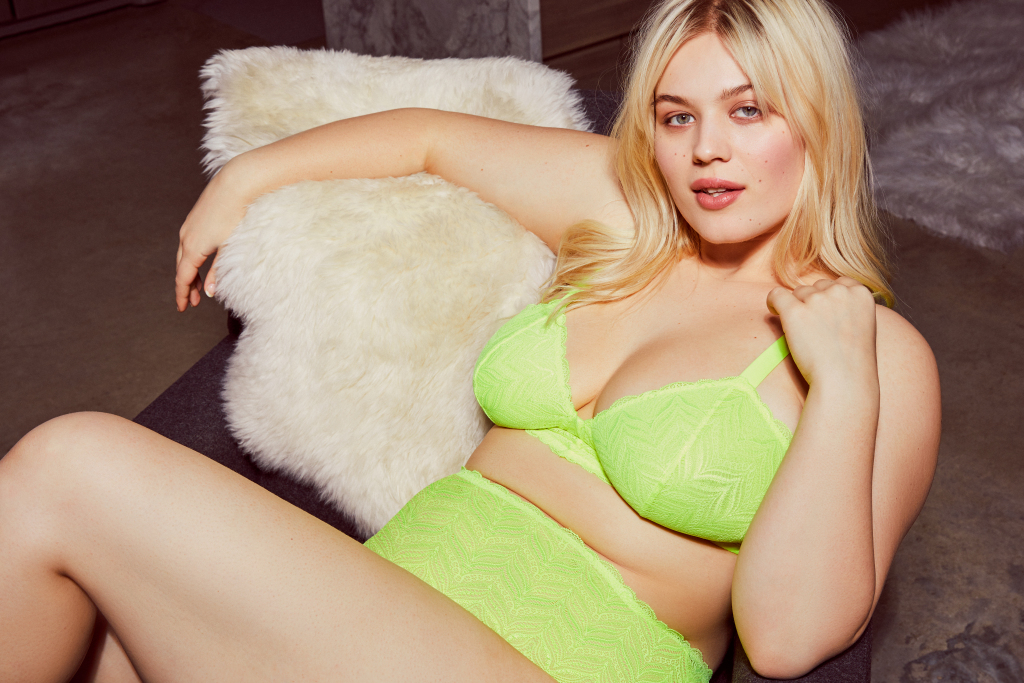 Meanwhile at Amazon, it’s the Amazon Web Services for cloud hosting that holds up the overall company, supplementing the low-margin, disruptive e-commerce business. “AWS is the cash cow,” Gonzalez said.

“All these ideas and collaborations sound interesting, but what about their core businesses? What about fixing them first?” said one former retail ceo. His point: The innovation retailers serve up can draw resources and divert attention away from issues at the primary business.

“The key is for brands and retailers to really be purposeful when planning these ancillary services and making sure there is a measurable halo effect,” Gonzalez said. “For example, when brands offer tailoring services as a core service offering, it likely drives traffic and heightens customer confidence in purchasing an item so therefore resources and investment into this alternative revenue strategy has a measurable impact to the overall business. But if the alternative strategy is more of a traffic driver [bandage] without an intuitive connective to the core business, it can be a distraction and perhaps wasted effort.” 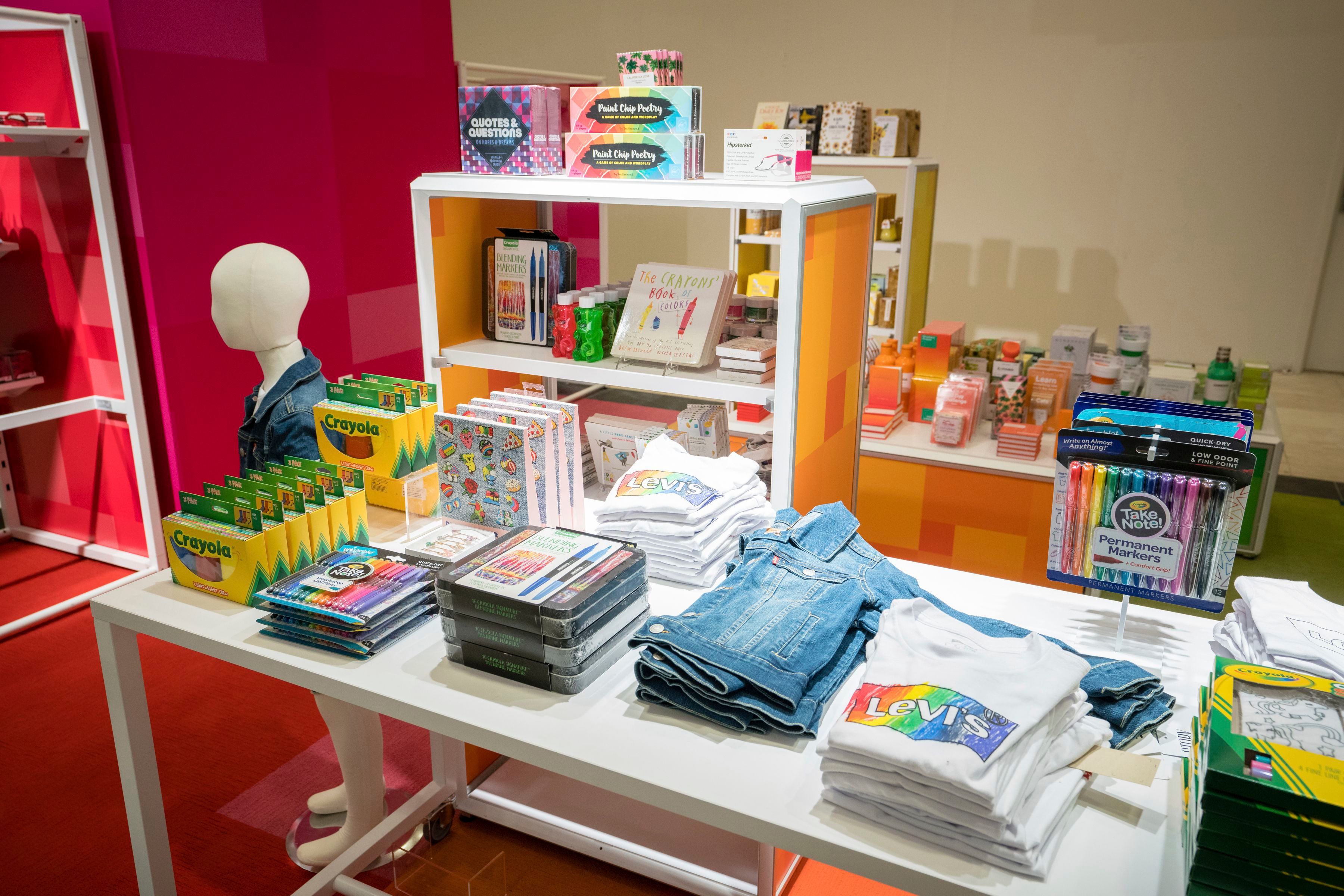 Crayola was a sponsor at Macy’s inaugural Story presentation which was called “Color.”  Tomas Ovalle/Courtesy

Not long ago, retailers considered food and beverage an amenity. Now restaurants and coffee stops inside department and specialty stores grab the largest crowds and can be important profit centers. A few weeks ago, Lululemon Athletica opened its first restaurant, “Fuel,” inside a new Chicago store and serves “power bowls” with kale and roasted sweet potatoes, smoothies and kombucha, among other foods. Crate & Barrel also recently launched a café, while Restoration Hardware’s RH Hospitality division has been profitably running restaurants and bars inside RH Gallery stores for four years.

Nordstrom, which opened its first restaurant nearly 40 years ago, operates 20 restaurant concepts for a total of 253 offerings in its 120 full-line stores. For its Manhattan women’s flagship, opening Oct. 24, there will be six food and beverage operations, all owned and run by Nordstrom. It’s believed the retailer’s restaurants are performing well. At the Bellevue Square store in Washington State, some merchandising space was converted to food and beverage. 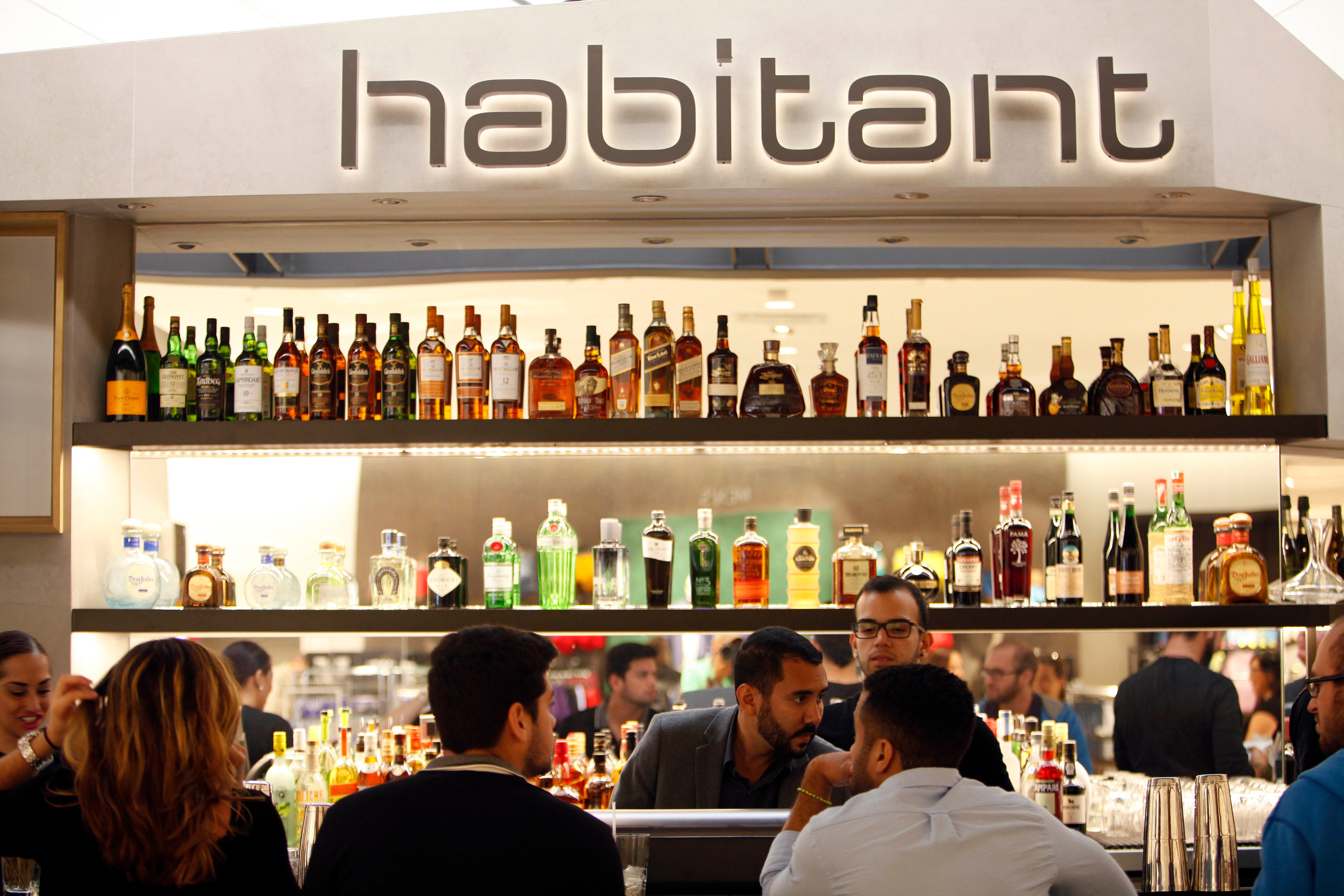 Food and beverage is growing at Nordstrom. Here, the Habitant bar/restaurant at the San Juan store.  Ricardo Arduengo/Courtesy

“The fact is a lot of this stuff belies the fact that many mainstream retailers have issues with their fundamental underlying businesses,” said the former ceo, who noted that Nordstrom’s full-line stores have recently not performed as well as the off-price and online businesses.

“Sure, Macy’s makes money from NBC broadcasting the fireworks, but how’s the apparel business? And what about Kohl’s? Sure they figure they will get ‘x’ amount of people coming in from Amazon, but at the end of the day, you have to make more out of your core business,” the former ceo said.

Simon, the nation’s largest developer of outlet centers, malls and mixed-use destinations, ventured into e-commerce for the first time this year by launching ShopPremiumOutlets.com. It’s an attempt to drive additional traffic to the “premium” outlet centers operated by Simon, another channel for the brands and retailers in Simon’s outlet centers to generate sales, and for Simon to capture another revenue stream.

“This is not your typical marketplace. The brands will be the heroes of the experience and will not get lost in the crowd,” said David Simon, chairman, ceo and president of Simon. While it’s widely perceived that the Internet siphons sales from brick-and-mortar stores, Simon has a different view, characterizing ShopPremiumOutlets.com as “collaboration, not competition.”

Kathy Gersch, executive vice president at Kotter International Inc., noted that REI has been selling used gear and equipment. “They just started putting real attention on it. It allows them to offer lower prices, widen the aperture of people that can shop at REI without diluting their primary business, and market to sustainability,” Gersch said. “It’s an interesting take on a different source of growth in revenue.”

Kohl’s, she added, is testing an in-store Weight Watchers concept as the retailer continues to lean further into health and wellness, and has been repurposing some space. Aldi, a food discounter, and Planet Fitness have been taking space in Kohl’s stores that are being “right-sized.”

According to a report from UBS, “Dollar General’s Western Union partnership shows it’s open to alternative profit streams. We believe DG’s new arrangement with Western Union should help drive traffic to the retailer. The service allows customers to complete Western Union wire transfers across Dollar General’s 15,000 store footprint. As a part of the service, customers are able to initiate money transfers (both domestic and international) through Western Union’s mobile app or through Westernunion.com, and then pay for them at Dollar General stores. This could position DG to play a larger role in international remittance transactions. Customers can also now receive Western Union payments at DGs. Importantly, we see this as DG’s first foray into alternative profit streams, which retailers are increasingly turning to in order to support operating profit dollar growth.”

UBS estimated how much Dollar General could gain through the partnership. “If we assume each store sees five transactions per day and each transaction averages a $10 fee, it implies $280 million in annual revenue generated through the arrangement. If Dollar General gets a 25 percent cut of this revenue, it suggests $70 million in annual incremental revenue with very little incremental cost. Thus, it implies that it could add $0.20 to the company’s full-year earnings per share, or a 3 percent lift.”

According to Gonzalez, as stores evolve into showroom experiences, “four-wall profitability gets a lot more questionable. Stores are still important but you have to ask how much are they generating during their hours of operation.” Alternative strategies and collaborations, she added, “will help drive traffic and make money.”

“Most retailers are looking to offset declines, Gersch said, explaining why alternative growth strategies are becoming more commonplace. “They’re not seeing the growth they’d like to see.” 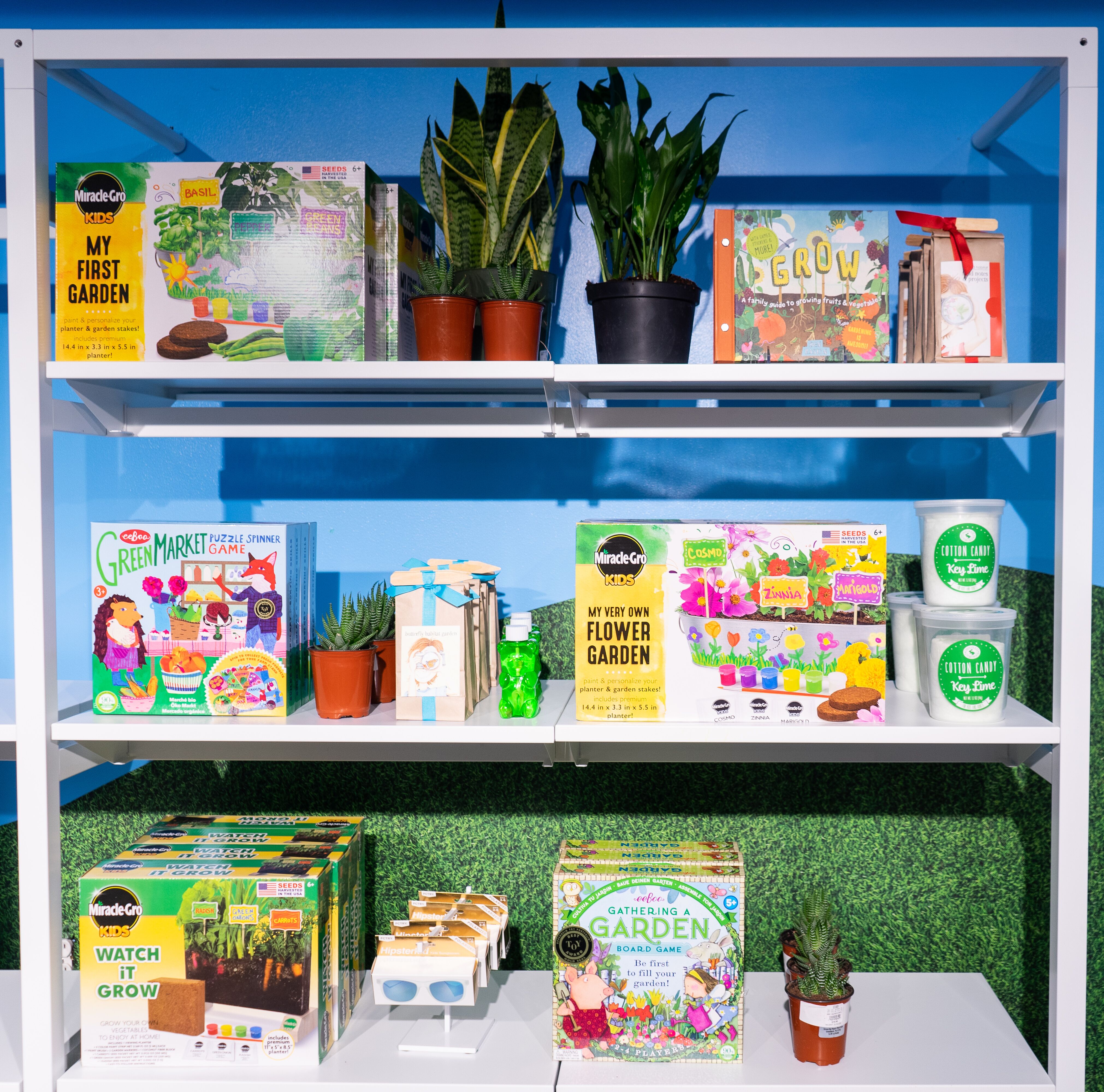 MiracleGro is a sponsor at Macy’s “Outdoor Story.”  Courtesy Photo