Retail Riding a Wave in Nantucket

Shopping is the third major pastime on this crescent-shaped island of swanky, gray-shingled second homes — right behind sailing and sunbathing. 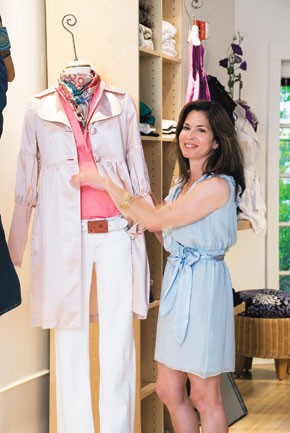 NANTUCKET, Mass. — Shopping is the third major pastime on this crescent-shaped island of swanky, gray-shingled second homes — right behind sailing and sunbathing.

Retail rents run as high here as they do on Boston’s Newbury Street, about $100 a square foot. And each year, the pressure is relentless to make the most of the eight weeks between late June and Labor Day, when merchants generate 80 percent of their annual volume.

Although the troubled economy is squeezing consumers nationally, Nantucket’s 160 or so retailers tap into an estimated half-million visitors during the season and a resident population that swells from about 10,000 to 40,000. Among the wealthy summer homeowners are Sen. John Kerry and his wife, Teresa; Chanel vice chairman Arie Koppelman and his wife, Coco; Horchow Collection founder Roger Horchow, and Google chief executive Eric Schmidt.

Visitors and summer residents have an average household income of $143,000, according to a Nantucket Island Chamber of Commerce survey. Tracy Bakalar, executive director of the group, said the figure is low because the survey didn’t reach the wealthiest visitors who arrive on private jet or yachts.

However, Nantucket is “not immune from retail downturn,” Bakalar said. “We’re encouraging retailers to stay open past five, to keep regular hours and really stroke repeat customers….There are service things to pay attention to when our [local] economy is leveling instead of a rocket ship.”

She cited a 5 to 10 percent increase in off-season bookings, a phenomenon that parallels what’s occurring on Cape Cod as vacationers stay closer to home, and said there are “indications this will be a decent summer.”

Ian Murray, co-founder of Vineyard Vines, said a new high-speed ferry service that runs visitors to the island in an hour, as opposed to two-and-a-half hours, has made a difference.

“With better accessibility, the season seems to be getting longer, starting earlier and ending later,” he said.

Vineyard Vines operates a 2,700-square-foot store on Straight Wharf. Alongside the brand’s well-known ties printed with teeny sailfish, Martini glasses and golf clubs, there are newer ventures in children’s and women’s apparel. The Nantucket unit is a top performer among eight company doors, Murray said. He wouldn’t specify company revenues but said they exceed $50 million annually.

Almost all retail is independent and clustered in “town,” the historic section of Federal-style architecture and rutted cobblestone streets laid during the island’s whaling era.

After Ralph Lauren spent $6 million to buy a building at the corner of Federal Street, the merchant association successfully petitioned the state attorney general’s office to approve a measure that excludes any retailer who operates 14 or more stores.

Stylewise, the island continues to be the epitome of preppy -— Lacoste polos, needlepoint belts and cardigans with pearl buttons. The look shows no sign of ebbing, but more urbane fashion is also thriving.

“It’s evolving,” says Paola Gonfrade, owner of Gypsy, which counts Lanvin, Missoni, Roberto Cavalli and Stella McCartney as best-selling lines. “My clients don’t wear Lily Pulitzer. Yes, that is a presence here, but we’ve had people coming here for a long time who didn’t wear that and now they have a choice for something else.”

Gonfrade recently moved Gypsy to a larger space on Federal Street, which includes a VIP lounge on the upper floor, a courtyard for private parties and dressing areas walled in shimmering Italian tile.

“Our demographic is from late-30s to early-50s that constitutes a blend of Boston, New York and Philly,” Gonfrade said. “Often she has a home on the island, but a lot of times we have people coming in on their boats. There is a good British contingency.”

During the Nantucket Wine Festival in mid-May, jeweler Lux Bond & Green set up a table and sold roughly $560,000 worth of Patek Phillipe watches, Buccellati necklaces and other goodies. In the last three years as the event sponsor, Lux Bond sold $1.7 million worth of goods.

Jason Olbres, co-owner of Nalu, has seen island style evolve. When he opened in 2002, he stocked primarily girly surf lines. But after several seasons, the bestsellers have been contemporary fashion — BCBG dresses and some of Juicy Couture’s more sophisticated pieces, like a $360 cotton trench.

Kimberly Pizzitola, owner of Blu, said the sale of a couple of Parker Ochs crocodile bags, $1,200 for a clutch and $2,400 for a slouchy bag, pre-Memorial Day makes her optimistic.

“The bottom line is people don’t come to Nantucket for a bargain vacation,” she said.