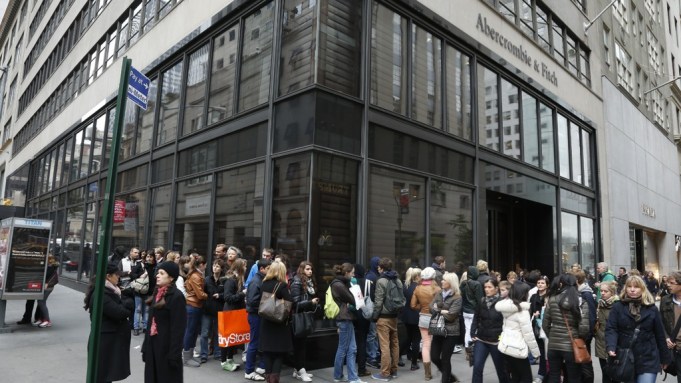 New Yorkers, after being cooped up for two days and in many cases unable to go to work or school, took to the streets Wednesday and floated into stores, helping retailers rebound a bit from the paralyzing impact of Hurricane Sandy.

Manhattan anchors Macy’s, Bergdorf Goodman, Bloomingdale’s and Saks Fifth Avenue, among other stores, were able to reopen Wednesday after being closed since Monday, and reported decent traffic, but no record-setters.

Barneys New York managed to open at 1 p.m. Tuesday, ahead of the competition. Though Fred’s restaurant inside the store remained closed Tuesday, the staff distributed free coffee, cappuccinos and peanut butter and jelly sandwiches to customers.

“Customers were pleased to find us open — we served complimentary coffee and sandwiches at Gene’s Cafe, and traffic was strong all day,” said chief executive officer Mark Lee. “Overall, for the six hours we were open, we made a plan for those hours and would have exceeded it had we had more help on hand.”

Lee said the decision to open the Madison Avenue store Tuesday was made after enough voluntary sales staff was determined to be available and able to arrive safely.

Fifth Avenue in Midtown bustled with tourists Wednesday afternoon venturing to Saks, Sephora, Uniqlo, H&M, Tiffany, Cole Haan and Michael Kors. “We were the only retailer opened on the street. There was a line out the door,” said a Kors sales associate.

Madison Avenue seemed less busy than Fifth, with many of the luxury retailers closed and traffic minimal at boutiques that were open. Ugg on 59th, however, had a big crowd buying the brand’s rain and snow boots and slippers.

At The Shops at Columbus Circle in the Time Warner Center, it was business as usual, save for Whole Foods, which had a line and an associate-bouncer enforcing a one-in-one-out policy. While some shoppers wandered into A|X Armani Exchange and C. Wonder upstairs, many searched for electrical outlets to power up cell phones and computers.

In the Garment District, Kellwood Co. reopened its corporate office in New York on Wednesday. The Vince stores remained closed in New York City; Short Hills, N.J., and Manhasset, N.Y. and hoped to reopen on Thursday. The company’s Rebecca Taylor stores on Madison Avenue and in Westchester, N.Y., reopened, but the units in the Meatpacking District and NoHo remained closed. Ralph Lauren’s corporate office on Madison Avenue reopened on Wednesday.

Maintenance worker Robert Allen said only 15 percent of the employees of the 150-plus companies at 1407 Broadway made it to work. He had been working there as well as at 499 and 462 Seventh Avenue since Sunday. A security guard at 1411 Broadway estimated that about 10 percent of the building’s 1,500-plus employees were at work Wednesday. At 525 Seventh Avenue, only seven or eight of the 42 companies had offices open, according to Israel Perez, who manned the security desk despite usually handling freight for the building. At 530 Seventh Avenue, most of the 200 companies had some staff on the premises.

Much of Manhattan below 42nd Street was still without power, and gridlock was widespread on both the East and West Sides, particularly Midtown, where most of the shopping action occurred. Where opened, McDonald’s, Starbucks, grocery stores, diners and bars were packed with people, and often running low on food supplies.

“We’re getting back on our feet,” said Steve Siegler, ceo of the 63-unit J. McLaughlin speciality chain. “We have traffic in the stores and doing business. I don’t see a mad rush, but it’s too early to tell. I’m sure restaurants and stores will get busy. People are getting cabin fever. All of our stores are manned and opened to do business, except for three,” in Bridgehampton and Southampton on Long Island, and Morristown, N.J. The three were either without power or it was too difficult for employees to get to work. Siegler said the company will be donating 10 percent of its sales through Sunday to local firefighters in communities where J. McLaughlin has stores. Other retailers also initiated donations to the Red Cross and various relief organizations and charities.

The silver lining for retailers, according to Morgan Stanley retail analyst Kimberly Greenberger, is that the storm’s impact on sales should be in the first week of November, rather than later in the month, which is more critical as the kickoff of holiday shopping. “While Sandy is a likely November sales headwind, we think the timing limits the overall monthly impact,” she wrote in a research report. “Mall traffic likely turned negative starting Saturday [Oct. 27], while widespread power outages and post-storm cleanup could drive disruption through November, week one.”

According to research conducted by UBS, Sandy’s impact on specialty retail is “too soon to call,” but the timing of the storm was “less critical than Irene.”

The specialty retailers most exposed to Sandy’s wrath were Ann Taylor, The TJX Cos. Inc., Urban Outfitters, the Gap and American Eagle Outfitters, with roughly 21 to 22 percent of their fleets impacted.

While Sandy likely caused more physical damage, most of the impact was on Monday and Tuesday during a transitional product period, between fall and holiday, said UBS analyst Roxanne Meyer. “Irene’s timing was at a more critical time, at the end of August. Overall, it seems too soon to call the impact, but a few management teams believe it won’t be material to the overall quarter.”

Among department stores, Meyer said Saks and Macy’s had the most exposure in the Northeast. The analyst said Saks’ Manhattan flagship makes up 22 percent of sales, while roughly 20 percent of Macy’s business was affected by the hurricane, including Macy’s and Bloomingdale’s flagships.

“Assuming no significant store damage, we still expect sales to accelerate in early November, post-hurricane and election, through Black Friday,” she noted.

As of Wednesday morning, Macy’s had about 25 stores still closed due to power outages, primarily in northern and central New Jersey and on Long Island, as well as one in Cleveland. Macy’s Herald Square reported that the store was busy. “Many individuals have been under a lot of stress, so shopping is a way to relieve some stress,” said Macy’s corporate spokesman Jim Sluzewski.

Saks still had two stores in New Jersey, in Bergen and Short Hills, closed, as well as its Walt Whitman Mall store on Long Island.

Metro-area mall operators also reported traffic returning Wednesday, aided by school closings, consumers’ need to replenish essentials and basics, some late Halloween shopping, or just people feeling a touch of cabin fever and looking for something to do.

Taubman Centers Inc. said its Stamford Town Center in Connecticut reopened Wednesday with normal operating hours. “Traffic through the mall has been steady to heavy since late morning,” reported mall spokeswoman Pam Wiles. Taubman’s Fair Oaks Mall in Fairfax, Va., reopened Tuesday at 10 a.m. “We had great traffic throughout the day, very much like a Saturday,” observed Robbie Stark, the mall’s general manager.

Simon Property Group Inc., which experienced minor damage to certain properties, had three premium outlets and 12 malls still closed as of Wednesday, principally in New Jersey and on Long Island, and said it was working with the Red Cross to facilitate donations.

Wal-Mart said at the peak of the hurricane, 294 facilities — stores, clubs and distribution centers — were closed, due primarily to mandatory evacuations, power outages and safety concerns. Although a few associates have reported personal property damage, the company said it has no reports of significant damages to facilities or associate injuries related to the storm.

As of midday Wednesday, 35 stores remained closed, the majority in New Jersey, although New York, Pennsylvania, Connecticut and West Virginia were also impacted. “All things considered, we feel extremely fortunate. We received very minimal damages to our stores and clubs, and the vast majority of our associates are reporting they made it through the storm OK,” said Mark Cooper, senior director of global emergency management in a press briefing Wednesday morning.

After initially closing 140 stores across the East Coast, which fell to 60 on Tuesday, Target had only four stores still closed on Wednesday, in the Bronx and Farmingdale, N.Y., and Fairfield and South Plainfield, N.J. “We have guests that have started to come back to the stores to shop for essentials that they need. It’s a lot of basic items, like bottled water, food, paper products, cleaning supplies and time-occupying activities such as games,” said Target spokeswoman Jessica Deede.

She said damages were confined to front doors and some leaking roofs, and nearly 40 stores were operating off generator power on Wednesday. “Right now, we are really focused on replenishing stores,” and staying focused on inventories, vendor situations and road conditions for receiving goods. “Some of our stores are experiencing reduced hours, with limited lighting in parking lots, or they are in areas with curfews.”

In Connecticut, “We are open today. Everyone is safe, but it’s terrible in terms of getting around,” said Bob Mitchell, president of the Mitchells Family of Stores, which operates Mitchells and Richards in Connecticut, Marshs on Long Island and Wilkes Bashford in San Francisco. “Eightyfive to 90 percent of the towns in the area [of Mitchells and Richards] are completely without power. Long Island is pretty much the same,” Mitchell said, though Marshs was expected to open today.