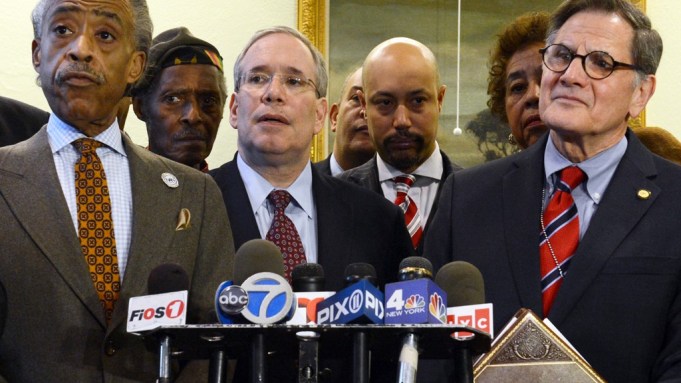 Sharpton said retailers and civil rights groups hammered out a Customers’ Bill of Rights, listing what consumers can and cannot expect when they shop in stores here. The Bill of Rights is expected to be posted this week in major retail stores, as well as on retailers’ and the Retail Council of New York’s Web sites.

“There will be — as already started by Barneys New York — an immediate reevaluation and discussion and agreement on the boundaries of involvement of the NYPD and retailers’ security and customers. We have asked for an immediate meeting with incoming Police Commissioner William Bratton to have the NYPD agree on what those boundaries ought to be,” said Sharpton. Furthermore, he said, “There will be ongoing discussions of community involvement between these retailers and the community.”

Among those who attended Monday’s one-hour task force meeting at Fifth Avenue Presbyterian Church were representatives from Barneys New York, Saks Fifth Avenue, Macy’s, Bergdorf Goodman, Lord & Taylor and the Gap, as well as civil rights leaders and politicians such as Manhattan Borough President Scott M. Stringer; Marc H. Morial, chief executive officer of the National Urban League; Donna Lieberman, executive director of the New York Civil Liberties Union, and Kirsten John Foy, president of the Brooklyn chapter of the National Action Network. There were no representatives from the NYPD at the meeting.

The task force was established to address recent racial profiling allegations at Barneys and Macy’s.

Ted Potrikus, executive vice president and director of government relations at the Retail Council of New York, said the task force has held several meetings since its initial Nov. 22 one and has set “a good faith relationship going forward, with all the community groups and the retailers that the Retail Council represents.”

“We’ll be working with them and some of our national associations to take this idea in a number of different directions. It’s an important start. We have a lot of good work to do ahead,” said Potrikus.

The Customers’ Bill of Rights, obtained by WWD, states: “Profiling is an unacceptable practice and will not be tolerated.” The document notes that the store “prohibits unreasonable searches and/or the profiling of customers by any employee.” Further, it says employees “who violate the company’s prohibition on profiling will be subject to disciplinary action, up to and including termination of employment.” It also states: “A person may be detained only in a reasonable manner and for not more than a reasonable time to permit investigation or questioning, provided an authorized employee has reasonable grounds to believe that the person so detained was guilty of criminal possession of an antisecurity item or was committing or attempting to commit shoplifting on the premises.”

The Bill of Rights has no legal force, however, and it is voluntary for retailers to post it. Only those retailers that are part of the task force plan to post the document. For consumers to report any instances of profiling or violation in the stores, the Bill of Rights gives the phone numbers for the New York State Division of Human Rights and New York City Commission of Human Rights.

Sharpton said he’s pleased with the progress that the task force has made, but there’s still a lot of work to do. “We’re very cautious. This is the beginning of a process. This is not a conclusion of a process,” he said. He said he was happy to see that the civil rights groups such as National Action Network, New York Civil Liberties Union and the National Association of the Advancement of Colored People were not just reacting to the headlines of a few weeks ago, but are staying on this. “Now there is a move for retailers to address racial profiling, to put [the Bill of Rights] up in their stores, and to deal with policing, which has never happened before. But it must be monitored, followed up and dealt with. In the words of an Alabama protester, we’re not where we want to be, but thank God, we’re not where we were several weeks ago. We intend to stay on this until we can guarantee that racial profiling and ‘shop and frisk’ becomes something of the past,” said Sharpton.

Asked how prominent the Bill of Rights sign will be in the stores, Sharpton said each retailer will deal with their signage and will post it on their sites.

Sharpton said he looks forward to sitting down with Bratton in the next few days.

“We have to meet with Bratton. We cannot have an agreement with the NYPD without the incoming commissioner saying, ‘We agree to that.’ We could as of this morning, have agreed to certain things that Barneys has said and Macy’s has said, but Bratton could say, ‘NYPD could not operate that way.’” Asked if he spoke to Bratton about this last Saturday when he met with him, Sharpton said, “I’m a preacher, not a prophet. It was not obvious they would agree and deal with these boundaries [which were discussed Monday morning].”

Asked what message Macy’s would like to tell customers, Edward Jay Goldberg, senior vice president of government and consumer affairs of the company, said, “The message is really simple. I understand the gravity of the situation. We’ve developed a very good working relationship and subscribe to the document. We’re cooperating with the group and we’ll continue to cooperate, and we look forward to welcoming everyone as a customer.”

Meanwhile, Patricia Gatling, NYC Commissioner of Human Rights, is conducting a separate probe into racial profiling, and asked 17 ceo’s of the largest retail stores doing business in New York to submit documents by Nov. 22 about their loss prevention policies and procedures for approaching and detaining individuals suspected of theft. Gatling subpoenaed Macy’s and Bloomingdale’s on Nov. 27 for their documents and set a deadline of Dec. 10. As of Monday, Macy’s hadn’t submitted the documents yet.

“On Friday, Dec. 6, Macy’s filed objections regarding the Nov. 27, 2013, subpoena served by the commission,” said Gatling. “The commission has 30 days to consider the objections and make a decision. The filing of objections however does not negate or delay the need to comply with the subpoena. The subpoena requires Macy’s to provide the material by 10 a.m. tomorrow, Dec. 10, 2013. Any involvement Macy’s might have as part of a joint effort by retailers and civil rights leaders to help prevent future racial profiling does not satisfy the omission’s investigation.”

After the meeting, the NYCLU’s Lieberman told WWD: “We clearly made progress. There’s a concrete step forward with the Bill of Rights.” She believes there are some best practices that stores need to adopt. There are careful limits as to how store security personnel execute their responsibilities and how shoppers are treated once they’re detained, such as knowing their rights and having a lawyer. “I’m firmly committed to any interrogation to be captured on videotape,” she said. There was also agreement by the civil rights leadership and the retailers to approach the police department and meet about this issue. “That’s the elephant in the room. They need to be at the table,” she said.

Hudson’s Bay Co. has established an internal working group at Saks and Lord & Taylor to “strategize and work on all the issues surrounding this,” said a spokesman. It plans to display the Bill of Rights at its stores, but the exact location hasn’t been determined.

According to a Macy’s spokeswoman, “We believe that these meetings between retailers and community leaders have been extremely productive. We have formed excellent working relationships, which we expect will carry forward beyond today. We at Macy’s remain unwavering in our commitment to prevent all forms of discrimination, including racial profiling — a practice that we prohibit and will not tolerate. Ours is a company that welcomes all customers.”