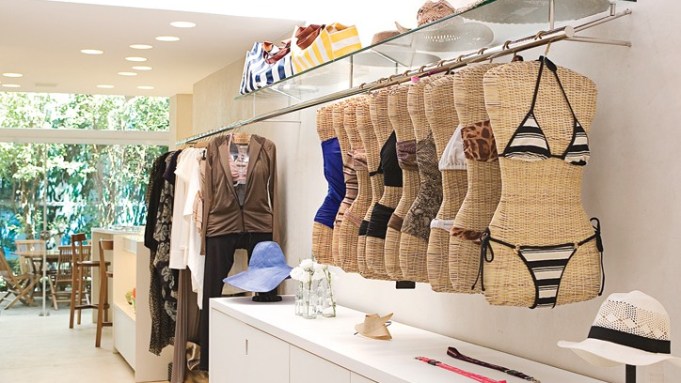 Store owners who create interesting experiences are having no problem finding customers ready for a little retail therapy.

Fusing fashion and contemporary art, Wok in Milan offers a mesmerizing array of hard-to-find brands plucked from around the world, housing them in an evolving art gallery–type space. The idea came to owners Simona Citarella, 29, and Federica Zambon, 31, after one of their many international trips. The 2,000-square-foot Wok features metallic copper, slate, white and sky blue walls that act as canvases for art in primary brights by underground talents like French graffiti artist Honet. Racks are tucked into nooks, and display cases are loaded with plastic sunglasses, fragrances by Histoires de Parfumes, plastic toys, costume jewelry and one-of-a-kind swimsuits. Some of the fashion, like that of Dutch designer Henrik Vibskov, was already available in Italy. But
Citarella and Zambon also introduced American brands such as Bess to the country. Other lines include Jean-Charles de Castelbajac, Opening Ceremony, Andrea Crews and Kaneko Design. Retail prices range from $69 to $2,000. The duo also recently created a Wok line in collaboration with some of its key designers. For spring, keffiyeh scarves were created with designer Rene Gurskov, using drawings made by guest artists Brian Brown, Elzo Durt and Arnaud Loumeau. Wok began online sales last fall and continues to host events, such as an exhibition of Italian illustrator Massimiliano Bomba this month and a workshop with Bosnian designer Lidija Kolovrat in October. On tap is a reading corner with fanzines and rare travel guides. —Rachel Mascetta

It’s a tall order to open a boutique in an upscale neighborhood where chic shops are plentiful and rents are sky high. But that didn’t stop Maya Meir, Maria Piscardelis and Valerie Caels from opening James in the Montreal suburb of Westmount, home to the most millionaires per capita in all of Canada. At James, most of the labels are from the U.S., and many are exclusives in Montreal. Tucked into the racks are a silk flower print blouse from Rebecca Taylor ($260), an embroidered tie-dyed top from Calypso ($233), a minidress from Foley + Corinna ($375) and an embroidered tunic dress from local house Boaime ($220). Accessories include Hanky Panky lowrise panties ($23), Love Quotes and Tolani scarves ($80 to $95), Dogeared jewelry ($25 to $135), JJ Winter purses ($385) and locally made Right Hand Gal rings and necklaces. Its biggest sellers are J Brand jeans ($160 to $250) as well as evening tops and bikinis. Meir notes that the editor of French-Canadian fashion magazine Châtelaine is a regular customer and recently did an in-store photo shoot. “We have 100 different lines, and new merchandise in every week,” she says. “And because we have a lot of exclusives, we do a lot of reorders. Our customers travel to the U.S., Europe and South America, so they know what’s out there.” —Brian Dunn

While shop closures may be the rule of the day in these troubled financial times, Berlin is also luxuriating in a steady stream of store openings. And it’s not only the big names that are generating the action, though Ed Hardy, Ben Sherman, COS, Massimo Dutti, BCBG Max Azria and Cinque are some of the brands that recently have opened stores all around town. Small designers and young entrepreneurs also are bravely entering the fray with shop concepts for an increasingly demanding young fashion clientele. It’s a welcome development because, compared with most major metropolitan centers, the German capital has been seriously undershopped. Indeed, from a retail standpoint, Berlin long has been a great place to save money, which has suited most Berliners just fine. And perhaps that’s the secret to this latest retail renaissance: both costs and sales expectations remain low in Berlin, which makes it a bit easier to try to realize the dream. Here, a roundup of some of Berlin’s freshest retail entries. A few, at press time, were less than a month old, while others were getting ready to celebrate their first year on the scene.

Austrian fashion student René Schopf was only 20 years old when he joined forces with René Klysch last summer to open The Hunter, a source of stylistic nourishment for Berlin’s most ardent hunters and gatherers of designer fashion. The simple white store on a quiet, residential block in Prenzlauer Berg plays host to men’s and women’s clothes from the likes of Bernhard Willhelm, Christian Wijnants, Gareth Pugh, Killian Kerner, Marcel Ostertag and Kris Van Assche, plus handpicked accessories, beauty items and magazines from around the globe.

Although this is another Berlin “concept store” in Prenzlauer Berg devoted to the mix of fashion and interior design, the last thing one could call this skinny little two-story shop is “designed.” Indeed, its relaxed, ramshackle nature is a big part of its charm—that and lesser-known Scandinavian and Italian brands such as Lola Ramona, Stripe, Graham, Modern Amusement and Cyberg that pack the racks, display tables and even walls of this old butcher shop–turned-boutique.

The men’s and women’s collection Born in Berlin was founded by Berlin fashion students Judith Hohnschopp and Julia Buttkewitz in 2005—in Turin, Italy, where the atelier and first shop is still based. But in October, the two designers decided to open a second door in Prenzlauer Berg (their old hometown), which presents their cool take on fashion and function, augmented by selections from Bkonzept, Petra Dieler shoes and jewelry by d-sign and ion.

Don’t be mislead by the vintage shoes in the window. Or the name Paul above the door. This is indeed the home of Cheap Monday in Berlin’s Mitte, a 270-square-foot mini apartment that’s been filled with the nicely priced Swedish collection for men and women, as well as a few selected vintage pieces— those shoes included.

The newest kid on the Mitte block aims to stay that way with a constantly changing array of fashion plus lifestyle accessories, which aren’t normally found in Germany, such as the store’s opening collection from Greece, Eros by Erotokritos; hand-crocheted, food-inspired friends by Ketty Sean; Magno wooden radios made in Indonesia; M. Poulet T-shirts and music by Perlon. The white building-block interior by Double Standards also can be altered at will, and there’s an inviting back terrace to enjoy. —Melissa Drier