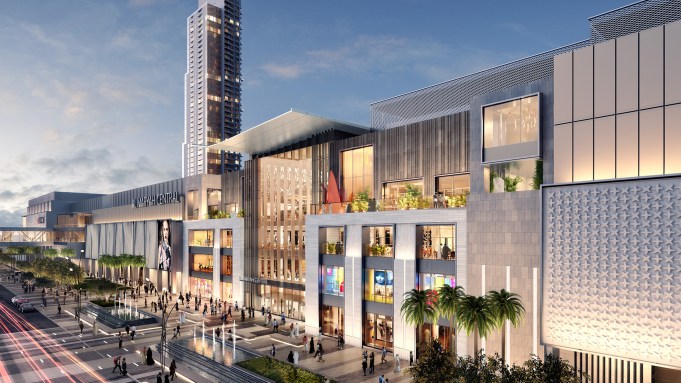 In the Middle East, specifically the United Arab Emirates, consumers have become brand and fashion savvy, stores and malls are among the world’s most advanced, and a day in the shopping center is a welcome family affair and entertaining reprieve from the desert heat.

It’s a far cry from North America, where malls and department stores are getting a bad rap.

“Go to Dubai and some of the experiences you feel are over the top. I love the 100,000-square-foot shoe floor, the ski slope, the aquarium. There are a lot of interesting things to see,” said Stephen Sadove, of Stephen Sadove & Associates and formerly chief executive officer of Saks Fifth Avenue.

He’s referring to the Dubai Mall, which houses the 96,000-square-foot Level Shoes concept that includes 40 boutiques and is considered the world’s largest setting for selling footwear and probably the most comprehensive for service with personal shoe styling, shoe restoration, feet therapy, food and a concierge.

Outside the U.S., Sadove, when queried recently, said, “The world is different. There is much more full-price selling. The U.S. is the most price-promoted market in the world and it’s hurt the market.” In the Middle East, there’s less flexibility to be promotional, with licenses from the government often required.

At last April’s World Retail Congress held in Dubai, Khalid Al Tayer, ceo of retail for the Al Tayer Group, a major retail player in the Middle East through licensing and joint venture agreements, suggested retailers in the Middle East confront some of the same issues as those around the world, whether that’s changing consumer spending habits or lack of merchandise innovation. “The challenges in this part of the world are no different,” he said.

But Al Tayer also said the Emirati consumer is one of the most active on digital media, globally aware, exposed to brands and has attained a level of sophistication in that they embrace new trends and new styles very fast.

“The voice of influencers has completely changed the landscape of marketing and the value system of consumers,” he said. While the Middle East has “a nascent digital commerce landscape, it will evolve very fast,” Al Tayer added, characterizing the consumer population in the region as “very young and very adaptive.”

Dubai, according to Al Tayer and other retail experts, ranks second in the world behind London as a showcase for the most innovative retail concepts and for its breadth of offering.

“Reinventing the mall is something Dubai has been doing for some time,” observed Mortimer Singer, president of Marvin Traub Associates, who moderated a panel at the World Retail Congress that included Al Tayer, Terry J. Lundgren of Macy’s, and Daniel Parry, managing director and general counsel at Gulf Related, the Middle East arm of the New York-based developer Related Urban.

Disclosing some findings from a Gulf Related survey of 1,000 people in the Middle East about shopping, Parry said that 94 percent of the respondents indicated they regard malls as a primary leisure time destination. “People want a sense of community. They want to be entertained,” said Parry.

Gulf Related’s projects in Abu Dhabi include the Galleria luxury center, which has been open for about three years, and the adjoining Al Maryah Central mall, which is under development and is scheduled to open in 2018 with a Bloomingdale’s and Macy’s first international store.

According to Parry, the number-one reason people come to malls in the Middle East is for shopping. The second most important reason is to have fun, interesting experiences. Dubai, Parry said, “is probably the number-one city in the world where entertainment connected to malls exists. Asia is probably number-one for food, and 46 percent of people from Abu Dhabi are shopping Dubai malls for the entertainment. We need to focus on bringing that entertainment into Abu Dhabi. It’s about understanding the local market — what experiences they are seeking and adapting to that.

“In Al Maryah Central, we are incorporating public parks; public open spaces; beautiful, light airy spaces designated for different age segments, different needs and wants. People want convenience. We have created 7,000 car spaces. Abu Dhabi has a very young population so we have increased the number of baby changing rooms from 30 to 40.” The mall is where “people want to meet and dine,” Parry said, adding that Gulf Related has decided to increase the entertainment components for all age groups and that 20 percent of the mall will be devoted to food and beverage.

The future of retailing and the mall “is more about experience. To do that you have to very specific to where you are going,” said Al Tayer. “I don’t think you can underestimate the creative process of creating experiences. You need very strong partnerships to work with the landlords and the retailers to achieve that.”

According to Tony Spring, ceo of Bloomingdale’s, “I’m not sure that stores per se are so different in the Middle East, but there is a different attitude toward shopping. There’s lot of entertainment embedded in the malls, a thoughtful approach to food and beverage, modern movie theaters, the latest technology, hotels are attached to the malls and there is a lot of family activity. It’s a very comfortable, relaxing setting, and mall visits are considered a recreational activity as well as shopping. What they have there is more special — the layout, the adjacencies, the ease of shopping and there’s newness. You’re looking at a relatively young retail buildout.”

During an interview, Singer, who has been consulting Al Tayer, Gulf Related and Macy’s Inc. in the Middle East, characterized the three-year-old, 350,000-square-foot Galleria as “the most important luxury retail environment in Abu Dhabi due to its philosophy of ‘place-making’ driven by experiential food offerings with terrace dining, sky views, kitchens openly visible to the public, and such restaurants as La Petite Maison, Zuma, Armani Café and Roberto’s.” It has the feel of a “food hall on steroids,” Singer said. And from a socializing perspective, there’s a “warmth and interconnectivity.”

The Galleria, Singer said, “is performing remarkably well despite what is globally an interesting environment…Every single brand is trying to make sure they double down in that part of the world.”

Dubai, Singer said, is a “mature retail environment, spurred by booming tourism and the fact that there are 2 billion people within a four-and-half-hour flight of Dubai…There’s a wonderful catchment, ranging from India and Asia, Europe, Russia and other Middle Eastern states, and there are two powerful airlines serving the country, Emirate Airlines and Etihad Airways. It’s a portal to the rest of the world.”

He added that the tourists, business travelers and local consumers all have “incredibly high expectations. They have seen everything. They are well-traveled. They are young. Sixty percent of the population is under 30. They are incredibly digitally savvy and have the highest mobile penetration of any country on the planet. It’s not enough to believe you can just open a store and it works. It has to be best foot forward.”

The Dubai Mall, one of the largest in the world, generates $6 billion in sales, accounting for 5 percent of Dubai’s $110 billion in GDP.

Singer characterized Kuwait as “a good environment” for retailing. He said the recently opened Bloomingdale’s in Kuwait City is off to a great start.

“Qatar is also a strong retail environment, and unbeknownst to many, Beirut has a good retail environment,” Singer said. “It’s a very progressive city. To many people in the region, Beirut is one of their favorite destinations, and still considered Paris in the Middle East,” despite Lebanon’s political instability.

“What you have to do in the Middle East is to plan on families, guests, friends spending between five- and six-and-a-half hours in the shopping experience, and many times it’s for two meal periods,” said Ken Himmel, comanaging partner of Gulf Related. “Food and beverage is a big part of what  goes in. Everything has to be air-conditioned. You have to program in the projects a variety of things for people to  do. Entertainment becomes huge. Children’s entertainment becomes huge. Movie theaters are unbelievably big.”

By comparison in the U.S., Himmel said, people spend between 60 and 90 minutes in a shopping center.

He characterized the Mall of Emirates in Dubai and the Dubai Mall as “monster shopping centers. The Dubai Mall is 4 million square feet, generating between $1,500 and $2,000 a [square] foot, over $6 billion in revenue. The Mall of Emirates is not that far behind. All types of customers come to these projects, whether a locale Emirati or a traveler. They attract people from all over the world. The customers are incredibly well-traveled. Brands have to be absolutely at the top of their game.  These stores match the best stores anywhere in Europe or America. No one skimps.”

Gulf Related’s 3.1 million-square-foot mixed-use Al Maryah Central will include retail, cafés and restaurants, entertainment options, a cinema, health club, luxury hotel and residential towers, with about 1.8 million square feet for retail, food and beverage. Al Maryah Central should be around 75 to 80 percent leased by the fourth quarter of this year. Along with the 205,000-square-foot Macy’s and 230,000-square-foot Bloomingdale’s, there will be a Zara and all the other Inditex brands, as well as Gap, Banana Republic and Abercrombie & Fitch, to name a few.

Himmel does see some overbuilding in the market and a disconnect between supply and demand. “There’s not the same restrictions to growth” as in the U.S., he said. “Zoning and approvals to wealthy families and government entities are granted quite generously.

“It’s definitely getting oversupplied and there is a lot in the pipeline,” Himmel said. Similar to what happens in the U.S., not all of which is in the development pipeline ever gets built.