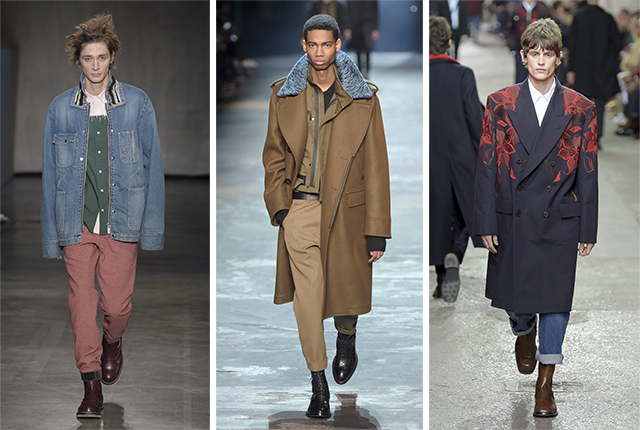 PARIS — Commercial appeal was the resounding cry from many buyers after the men’s collections here, with some describing the season as the French capital’s best ever.

The successful blending of streetwear with luxury design, thanks to collaborations such as Louis Vuitton’s high-profile tie-up with Supreme, as well as a strong outerwear proposition, were among the features that made the season stand out.

“We are seeing a shift in the market and there is a strong emphasis on more elevated streetwear that you can combine and mix and match with your wardrobe,” observed Holt Renfrew president Mario Grauso. “As we edit our sartorial businesses, we feel confident that our customers will react to the more advanced designer pieces we are bringing in. Our men’s customer is looking for advanced designer brands and we look forward to providing him with many options to choose from next season.”

“Paris always excels when creativity strikes a balance with the commercially viable, which was a great specific strength here this season,” said Bruce Pask, men’s fashion director for Bergdorf Goodman. “There was great ingenuity and inventiveness that intersected with an awareness of the customer and what he is craving from the design world. It was a terrific season in Paris.”

“Paris was excellent, the creativity behind the shows was simply outstanding,” remarked Dean Cook, men’s wear buying manager at Browns fashion. “The collections being produced this season were stronger than ever before so we are very confident about where we are taking this [and] how our customer will be buying into it,” he said.

Stylebop buying director Chris Kyvetos observed, “This felt like a benchmark season in several ways, with both major groups — LVMH and Kering — embracing the new spirit of men’s wear that reflects the tastes and wants of the latest generation of consumers.

“The collaboration between Louis Vuitton and Supreme and the new direction at Balenciaga were just two among many examples of the re-drawing of luxury, discarding old oppositions between streetwear and high fashion. This makes us very confident about our own business plan, as it only affirms the direction we have been pursuing.”

Both Junya Watanabe and Sacai collaborated with The North Face, further examples of the partnership trend that appealed to buyers in Paris.

“I think collaboration might be the key trend,” said Kyvetos. “But then again, in many ways, this goes beyond trend dressing to address how major labels are really registering the impact of cult influencers, like Supreme, and not just referencing them. This is yet another example of how streetwear has profoundly influenced luxury men’s wear, inside and out.”

Beyond co-branding, several highlighted what Neiman Marcus senior vice president and fashion director Ken Downing summed up as “speaking” fashion — items with text, messages and the incorporation of logos with a Nineties sensibility.

But while buyers believed that Paris had been more directional and surprising than Milan, several said that overall, there had been few surprises, which meant there was also plenty of commercial merchandise to be had.

“This winter season there is no breakthrough, though, or very strong new trend. It is more of a consolidation of what we have seen for the past seasons — sporty street looks, precise tailoring and a mix of the two,” said Emmanuel de Bayser, cofounder of The Corner in Berlin.

“With the political and business climate so uncertain, it felt like everyone wanted the comfort of commercial trends. It was the most commercial season in a while,” said Hudson’s Bay Co. men’s fashion director Nelson Mui.

Maud Tarena, men’s wear director, Le Bon Marché, said, “The collections were strong and safe, hooked on beautiful outerwear pieces, lots of knitwear, and a large range of colors — so good for business.”

Standouts for most buyers included Dries Van Noten and Balenciaga, which saw Demna Gvasalia take his second bow for a men’s collection at the label. Haider Ackermann’s first outing at Berluti also got several mentions, as did Sacai, Rick Owens and Junya Watanabe. Younger labels Facetasm, Officine Générale and AMI Alexandre Mattiusi also created excitement, while Icosae and Hed Mayner were among the discoveries for some.

“We were really excited about Berluti, certainly as an inaugural collection for Haider Ackermann — really spectacular,” said Downing. “It’s probably my favorite collection this season because there was a great refinement, but through that refinement there was a real rock spirit. And you could see clothes that could translate easily from the catwalk to the sidewalk, but then in a supersophisticated way and an amazing color palette. I think that Haider is probably one of the great colorists of our industry,” he said.

“And I loved the punk-meets-teddy-boy attitude of what we saw on the runway of Dries Van Noten,” continued Downing.

In general, he said he appreciated the punk-rock sensibility that was an undercurrent in many collections. “I’ve been wanting this punk moment to hit. I’m excited to see that it’s hitting in a very hard way, and taking us from the Seventies into a little bit more of an aggressive, rock ‘n’ roll sensibility. With what’s happening around the world, there seem to be people standing up and speaking out, which was what punk was all about.”

Eric Jennings, vice president, fashion director for men’s wear, home and beauty at Saks Fifth Avenue, agreed, saying the Paris collections were “full of rebellion and optimism: Rebelling against fits that are oppressive and snug, while at the same time sending a message of optimism through the use of vibrant color.”

Many buyers said they had stable to increased budgets to allocate for the Paris collections, particularly for new brands. “Of course we still have the big brands and the big budgets for blockbuster brands, but we also look for smaller new labels to keep our offer fresh and desirable,” said The Corner’s de Bayser. “So it’s not really about budget, but more about creating an interesting mix of designers and products. Customers are more and more aware of trends and “It” products, so we want to make sure we have the right answer for them.”

“We are opening the ‘New Printemps de l’Homme’ in 10 days: an amazing new building, fully dedicated to men,” said Karen Vernet, Printemps’ general merchandise manager of men’s apparel. “Given this perspective, we forecast an increase in our sell-out for next spring.”

“We have increased our budget for the French collections over the last year due to our focus on advanced designer moving forward,” said Holt Renfrew’s Grauso, citing continued strong men’s business for the retailer.

“The share of the French collections will definitely be increased as the creativity and attention to detail for fall 2017 is just so high,” said Cook.

Outerwear stood out in particular, buyers almost unanimously agreed. “We saw it in all fabrications like performancewear, shearling and furs and plaids and checks,” said Grauso. “Statement outerwear will be the key item for the fall season. There are some interesting new variations to the coat that we saw and we were particularly drawn to the reconstructed outerwear pieces from Junya Watanabe and Sacai.”

Ian Kwon, vice president of Joyce, said, “Overall strong market with full variety of strong outerwear, from oversized tailored coats to outdoor sportswear. By defining the right choices, it is going to be high potential business as this category has higher ticket prices.”

Down and puffer jackets were among the standouts for several buyers.

Bosse Myhr, Selfridges’ director of men’s wear and technology buying and merchandising, said the Paris shows were more product driven than trend driven. “We have been seeing strong statement outerwear and a continuation of really exciting and unexpected collaborations, Junya Watanabe’s collaboration with North Face being a prime example.”

“Proportion play has been a big statement, from the fascinating distortions at Balenciaga to the more nostalgic Eighties-era shapes at Dries with oversized and dropped shoulders and slouchy knits,” said Bergdorf Goodman’s Pask.

Chunky knitwear, sports and performancewear and military were among the other trends creating excitement, while in terms of fabrics, velvet and plaids and checks of all shapes and sizes — whether classic houndstooth or Prince of Wales revisited or tartans with a punk vibe — are likely to be gaining space in store for fall.

“There is no sign of the sports and performancewear trend fading, with the tracksuit being a key item yet again,” said Reece Crisp, men’s wear buying manager at Farfetch. “The military trend also featured heavily again, with designers referencing color palette and shape. It was good to see an influx of bold colors with red and orange showing prominently. The silhouette for the season continues to be oversized, with the oversized hoodie being a key item and trend,” Crisp summed up.

Jennings said that for the first time, there seemed to be more tailored clothing in Paris than in London or Milan. He said it was certainly not classic tailoring, however. “Think David Byrne’s 1984 ‘big suit’ suit rather than the dapper silhouettes of London or the soft shapes of Milan.”

“Oversized pants are also a big statement, with several pleats, bringing some volume and modernity to the silhouette,” said Vernet, who also loved the long, colorful coats in refined materials like wool and cashmere on offer at labels like Valentino, the use of classic fabrics like tartan and the omnipresence of velvet.

“We are obsessed with velvet,” agreed Downing. “It is the perfect juxtaposition to the grit of punk and grunge.”

The color palette taking in rusted oranges and khaki greens, earth tones, lime green and touches of pink also proved pleasing. “The color palette is really rich, the base is more about navy, khaki, camel-brown with strong accents of russet, red, mustard and some little accents of purple and aqua,” observed Galeries Lafayette fashion editor Alix Morabito. “The purple that came back in women’s is touching men’s.”

“Paris has always believed in the dream of fashion and keeping the dream alive,” said Downing. “It’s great to see that new ideas came forth in such a strong and powerful way, giving us new ideas to present to the customers so there’s a reason for them to shop as fall [arrives].”