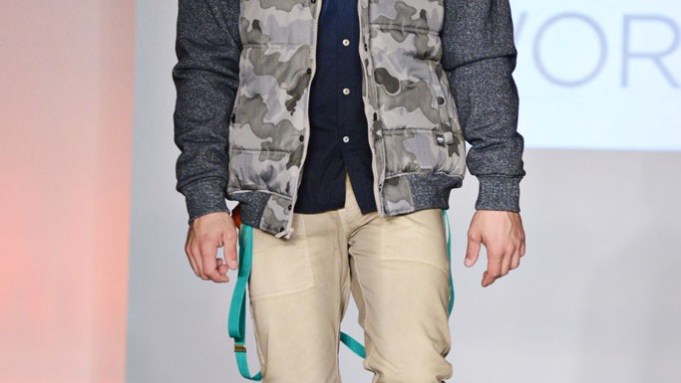 LAS VEGAS — With the economy in recovery mode, Wall Street hitting multiyear highs and men’s wear benefitting from continued trends in silhouette shift and color, retailers and vendors at the trade shows here were upbeat on the season.

Cold weather in parts of the country has put a slight damper on early spring selling, but buyers shopping Project, MRket and Capsule were looking forward to fall, with key trends including heritage fabrics in tailored clothing, technical outerwear, a return to classic indigo denim, layering pieces, mixed media, lots of leather, knit fabrics in unexpected designs like sport coats and a heightened accent on color not usually found in fall collections.

Wayne Drummond, senior vice president and general merchandise manager of men’s for Hudson’s Bay Co. and Lord & Taylor, said men’s wear continues to perform well at both the U.S. and Canadian stores, driven by sportswear, footwear and better brands. “Color is extremely exciting and men are buying it,” he said. Liz Rodbell, senior vice president and gmm for the company, said “all the newness in silhouette” has boosted business.

AG Adriano Goldschmied posted its best year ever in 2012 and so far in 2013 sales are up 40 percent over last year, said Sam Ku, design director at the brand, which showed at Project. While color has been a key trend in denim in recent seasons, the momentum is back to true indigo denim and authentic washes, he noted, with twill, chino and brushed sateen styles less popular this year. Apart from classic blue, neutral shades like black, white and gray are also doing well at AG and a number of other jeans brands.

“I think the market is more buoyant and buyers are more positive than they were 12 months ago,” said Stuart Millar, North American chief executive officer at G-Star, also at Project. “Retailers are planning up but they are more considerate in the buys and there’s an increased focus on meaningful brands.”

Denim and outerwear, G-Star’s biggest categories, have been predictably strong this season, while strength in knits has put a damper on wovens sales. “It’s a cyclical trend,” explained Millar.

Fall sales in the U.S. are up double digits at Gant, as the company reintroduces its main Gant brand to wholesale after focusing on the younger Gant Rugger and Gant by Michael Bastian labels here. Overseas, the main Gant line is the primary sales driver and the company sees considerable potential for it in the U.S.
While fall sales at Gant have been brisk, the cold weather in the Northeast has put a slight chill on spring sales. “February has been cold and the Northeast has been cooler then we would have liked,” said David Arbuthnot, ceo of Gant USA, adding that sales in sunnier California have been strong this month. The company will open a new store in San Francisco on Hayes Street in March, with another three stores planned for 2013 in the U.S.

Gant showed at The Tents @ Project, the show’s new home for designer and advanced contemporary brands, housed separately in a spacious, carpeted tent. Also, there was designer Michael Bastian, showing at his first trade show. He decided to take the plunge after Project president Tommy Fazio asked him to participate. “Tommy is an old friend,” said Bastian, “and my [runway] show was over, so I figured, why not.”

Barry Miguel, president of VF Corp.’s Seven For All Mankind, said the brand is off to a good start this year. “I always say it’s about compelling product and when you have that, it sells,” he noted. For fall, Seven is counting on its new men’s initiative called Luxe Performance, a proprietary and branded stretch denim that has superior recovery so that jeans keep their fit.

Wally Naymon, owner of Kilgore Trout in Cleveland, said business continues to be good, led by tailored clothing. “Slim fit is driving it, but we’re also doing well with traditional resources,” he said. “But so few people are wearing suits, so we’re looking for what’s next. We’re looking for great knitwear and outerwear.”

Mario Bisio of Mario’s in Portland, Ore., and Seattle, also reported strong business. “We had a good fall, ending with a good December, and January started strong,” he said. “It’s all about color and newness. There’s a lot going on with the slimmer silhouette. The new fit culture is working.”

Not everyone was completely sanguine about the retail climate. David Katz, senior vice president and chief marketing officer for Randa Corp., said the accessories company is hopeful that 2013 will be good, despite the macroeconomic issues that are impacting consumer spending. “The retail landscape is in transition and it creates a bunch of unknowns,” he said. But by focusing on design, Katz believes shoppers at all tiers of distribution can be lured into making a purchase.

“We have to provide product they covet,” he said, pointing to a woven wool belt with buffalo plaid accents under the Columbia label and novelty cuff links from several of its licensed labels. “They’re want-based products,” he said, “things that make you smile.”

Scott Norris, executive vice president and gmm for Men’s Wearhouse, said he is expecting 2013 to be challenging due to the economic environment, but “you always think the plans you have laid out will be met or exceeded.”

At the Las Vegas shows, Norris said the company was “looking for advantageous pricing. We’re also looking for anything fresh and interesting that can complement the current assortments.”

Fred Mazza, president of premium denim maker Prps, said his high-end retailers have been enjoying strong sales. “I’ve only been hearing good things from almost every retailer — although we may be a bit isolated from the real world,” he noted. “The worst of the economy seems to be over.”

Sales in the Prps Goods & Co. line of quick-response core denim, where jeans retail from $180 to $300, have been strong. Sold in about 275 doors in the U.S., the company is focused on growth within existing accounts rather than adding new stores. “There aren’t as many good stores as there used to be,” noted Mazza. “But denim has been a good classification to be in. For good brands, it’s more stable than sportswear.”

While fall is traditionally dominated by dark, muted tones, color was a strong theme this season. Mitchell Lechner, president of the dress furnishings group of PVH Corp. pointed out, “From hosiery to underwear to dress shirts to clothing, men are just more comfortable today with color.” For fall, these trends will continue and the color palette will tend toward pastels while bolder stripes, checks and plaids will rule the market in shirts, Lechner said.

In addition, slim fit in dress shirts has grown from single digits a couple of years ago to 40 percent of the business today. “It’s something the guy just didn’t have in his closet.” In neckwear, the magic width today is three inches. “A year-and-a-half ago, it was too skinny, now it’s accepted.” Pocket squares are also gaining in popularity and the bow tie business is still hot. “Bow ties grew by double digits in 2012,” he said.

Michael Buckley, ceo of Robert Graham, said the brand’s X collection of slimmer-fit shirts, outerwear and leather, designed to celebrate its 10th anniversary last year, continues to be among the strongest sellers. Cleaner silhouettes in stripes and jacquards along with printed merinos and sweaters are also gaining fans. “We’re running at a 30 percent increase for the first half of the year,” said Neal Kusnetz, president, adding, “And we’re tracking the same way for fall. The more contoured fit is driving it.”

Peerless Clothing had a strong presentation of overcoats from a variety of its licensed brands at its booth at MRket. “If you want to be successful, you have to spur impulse buying,” said president Ronny Wurtzburger. “People take overcoats for granted; we’re showing them they can be fun,” he added, pointing to orange toggle coats, tartans, shorter silhouettes and a range of color options from burgundy to medium blue with a variety of colorful, vivid linings.

Doug Wood, president of Tommy Bahama, said the company “came out of holiday very strong and we’re going into spring — our season — with a lot of steam.” Linen and polo shirts have been gaining momentum and in fact, he pointed out, a Tommy Bahama-branded polo is now the company’s number-one item. Denim has also gained fans and is now a year-round business. For fall, Wood is expecting these items, along with the Antigua, a heavy knit, half-zip pullover with contrast stitching, which retails for $98, to continue to be strong.

Original Penguin remains on a global expansion kick, with a slew of new doors opening in Latin America and Europe, as well as five new doors planned for North America this year. The brand has a new creative director in Matthew Abbott, a veteran of Calvin Klein Inc., Dockers Europe and Timberland Europe. “I think we’ve been too classification-driven and my aim is to design around full looks going forward, with a nod to our retro heritage, rather than looking like we’re living in 1955,” he explained, pointing out mannequins decked out in floral-printed chambray shirts, Shetland sweaters, M65 jackets with camo hoods and mixed-media utility jackets with fleece arms.

E-commerce continues to gain in importance in many brands’ growth strategies. Todd Snyder launched a Web store at the beginning of this year. “It’s a lot of work but it’s evoked a great response. We can speak directly to the customer, control the markdown environment and show the full range of the collection,” said Snyder. “We’ve had a really good season to date. I think we are developing a customer and brand, and people are starting to seek us out.”

Rogue launched e-commerce in October and the business has exceeded expectations, said Jon McKinney, president of global brand development. “Stores will have a rail of eight to ten styles but with our site we can showcase the full collection and customers who’ve wanted to know more about the brand can now show the full line,” he noted.