One of the largest storms to hit the region in decades could wreak havoc from Virginia to the New York-metro area and north to Boston.

By David Moin and Evan Clark and Kristi Ellis and Sharon Edelson and Jessica Iredale on October 28, 2012
View Slideshow 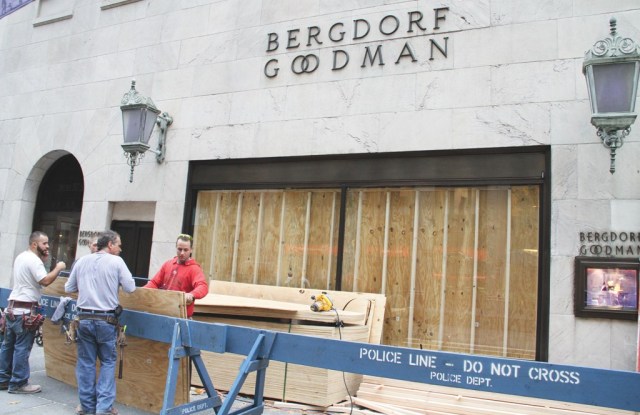 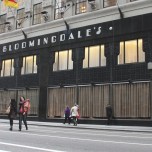 Retailers up and down the East Coast spent the weekend bracing for Hurricane Sandy — one of the largest storms to hit the region in decades.

This story first appeared in the October 29, 2012 issue of WWD. Subscribe Today.

Hurricane-force winds were expected along portions of the coast between Chincoteague, Va., and Chatam, Mass., according to the National Hurricane Center, which also warned of a storm surge.

Wal-Mart Stores Inc. said it had six stores in areas scheduled to be evacuated late Sunday and that the number was expected to rise.

Business did not grind to a halt Sunday, however. In downtown Washington, D.C., where it hadn’t yet started to rain, Macy’s, Banana Republic and other stores were open.

New Yorkers seemed more interested in last-minute storm supplies than the latest fashions as the sky darkened and winds picked up in the afternoon. Foot traffic was slow at the usually bustling 34th Street and Fifth Avenue shopping corridors.

Saks Fifth Avenue was preparing to board up its flagship in the afternoon and stay closed today. Bergdorf Goodman was also boarding up its windows, although some customers were unfazed and continued to shop in the store. The window displays at Aéropostale had also been covered up by plywood on West 34th Street, where the chairs in front of the Macy’s Herald Square flagship were removed. At least some Gap and Victoria’s Secret stores were closing early.

This week isn’t a critical sales period, though the storm has already impacted Halloween-related sales. The shortfall could be made up through sales of cleanup equipment, canned foods, candles, bottled water and other disaster and survival-related items.

New York area subway, bus and commuter railroad service was scheduled to be suspended as of 7 p.m. on Sunday, complicating the start of the work week and the normal flows in and out of the city.

Big retailers say they have the protocols in place to deal with the massive storm.

Warnings from weather forecasters grew ominous as the storm approached with the looming possibility of not only flooding and high winds, but downed trees and power lines, blackouts, snow and ice.

“Sears has an all-hazards emergency management program which responds to any natural or man-made disaster,” said Jim Waldrop, manager for corporate crisis and emergency operations. “We are very, very prepared. You can’t predict exactly what will happen.”

The company operates a crisis command center at its corporate headquarters that sends out daily communications to employees. In place are both flood risk and hurricane-preparedness programs that are reviewed annually before Mother Nature strikes. The programs are geared to make sure Sears stores are equipped with materials to board up windows and protect the property, including sump pumps, back-up generators, sandbags and even flood gates in certain locations.

Waldrop said that Sears has a third-party vendor that provides disaster response and recovery. Waldrop himself leads conference calls with regional vice presidents and other field officials to walk them through what’s required to deal with hurricanes. In advance of natural disasters, Sears readies trailers to evacuate merchandise; establishes a hotline for associates to find out the status of stores, and has an emergency contact list. The retailer will also obtain assessments from field leaders on status of associates.

“We try to stay open as long as possible to support our customer base, but safety is paramount,” said Waldrop. He also said that in the past, Sears has met with Target and other retailers to “share and exchange best practices” for coping with Mother Nature.

At Wal-Mart, “We are closely monitoring the storm path and preparing our stores and [warehouse] clubs as much as possible to follow all evacuation orders,” said Dianna Gee, a Wal-Mart spokeswoman. “We will close stores and clubs with enough time for everyone to seek shelter.”

With Hurricane Sandy, “We have about 800 stores, clubs and distribution centers that could be impacted. We monitor the evacuation routes and pay attention to stores along these routes,” so they’re stocked to meet disaster demands.

Wal-Mart accelerates deliveries of shovels, generators, water, canned foods, flashlights, gasoline containers, ice chests, candles, cleanup supplies and chain saws, among other items, and has several “disaster distribution centers” outside the storm path so the inventories are in good shape and ready to go to areas hit by disaster.

“The number-one priority is to take care of the associates,” Gee said. After that, it’s all about getting the stores back up and running and helping the community, she added.

“We are proactive about this. We put in a lot of protocols that anticipate many different scenarios,” said a spokeswoman for Ann Inc., which operates the Ann Taylor and Loft specialty chains. Ann Inc. has already been sending e-mails to employees at its stores and New York headquarters updating the storm’s trajectory. The company, like many other retailers, has an emergency hotline for employees to get information on store closings and openings and how to get help.

The company also has in place a “business continuity planning team” that moves swiftly into action when any kind of natural or man-made disaster strikes. Its first objective is to determine the safety and whereabouts of associates, and if they require help, and to reach out to local authorities for rescue efforts. The second objective is to determine the needs of the stores in terms of repairs and replenishments. The BCP team is cross-functional, involving officials in communications, security, facilities, and human resources. Ann Inc. also has an associates assistance program.

A Taubman Centers spokeswoman said, “At all of our centers we have a series of emergency management protocols that are initiated based on the current and forecasted conditions. We are in regular contact with local emergency-management officials to ensure we have the latest information on any weather situation. Our decision to remain open or closed is driven by these protocols and the information we have, with the safety and security of our tenants and customers top of mind.”

Among the steps that Macy’s Inc. takes is making sure the exteriors of stores are clear of anything that could blow around, and making sure internal communications systems are in place to reach employees if needed.

At Target, “The safety and well-being of our team members and communities is a top concern,” said a spokeswoman. “In the event of any major storm, Target helps prepare our team before the storm hits and acts afterwards to provide the specific resources the community needs to recover. Currently we are preparing our stores in the path of the storm by supplying essentials such as batteries and dry food. In addition, we are taking the necessary steps to ensure that after the storm, in the event of power loss, perishable items are replenished quickly.”