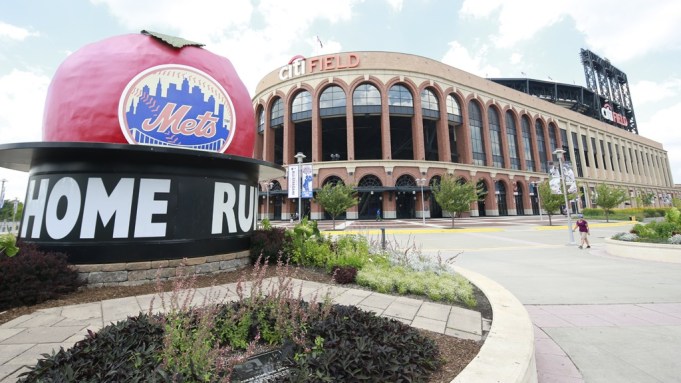 From the painted apple statues placed strategically around town to the fast-paced sales of commemorative merchandise, baseball fans are embracing the upcoming 84th All-Star Game, scheduled for Citi Field on Tuesday.

The New York Mets last hosted the Midsummer Classic in 1964, and it’s been four years since it was staged in New York, at Yankee Stadium.

“For a lot of the people in New York, it could be a once in a lifetime thing, so we expect the spend to be a lot higher [than in smaller markets],” said Rich Grey, divisional manager of retail for Aramark Sports, which runs the retail shops at Citi Field.

Although special merchandise sporting the ASG logo has been trickling in since last summer, the stores at Citi Field and throughout the city have stocked their shelves with T-shirts, jerseys, caps, beach towels, shot glasses and mason jars to meet the increased demand as game day approaches. “It started coming in last August when we got access to the logo,” he explained. “And we’ve been teasing it since then. But now, the stores are 100 percent flipped.”

Grey said customers are responding enthusiastically to the merchandise, which sports the New York City skyline and an iconic image of a bridge imprinted on the bottom half of a baseball, complete with orange stitching.

“The conversion rate is in the 30 percent range,” Grey revealed, “up from the usual 7 to 10 percent range. So it’s much higher.” He further revealed that even though the main promotional and marketing efforts won’t kick into high gear until the end of this week, sales are running at triple the rate of the stores’ largest volume days.

In men’s, name and number T-shirts and jerseys remain popular, with All-Stars David Wright and Matt Harvey of the Mets among the bestsellers. Grey said that before Harvey became the team’s ace pitcher this season, Wright’s T-shirts were the top seller, but now Harvey’s are flying off the shelves. “He’s the real deal,” Grey said. Windbreakers from the Authentic Collection from Majestic are also popular, he added.

Grey said that men’s and unisex merchandise such as T-shirts, jerseys and hats with the All-Star Game logo remain the bestsellers, but women’s merchandise continues to gain in importance. In addition to more traditional licensed items from brands such as G-III, the shops also offer feminine-skewed apparel from the Touch by Alyssa Milano collection. The line features more tapered, women-specific silhouettes and includes T-shirts embedded with rhinestones, along with tank tops, shorts and other pieces.

Other products in the Citi Field stores include “novelties,” such as glasswear, sunglasses, teddy bears, watches and miniature versions of both Citi Field and the Mets’ former home, Shea Stadium. And of course, there’s an entire display of All-Star Game-logoed baseballs. On the food-court level of the stadium is a hat kiosk offering caps from New Era from each Major League Baseball team that include the All-Star logo and stars on the back identifying them as special All-Star Game product.

Some of the merchandise within the stores at Citi Field is exclusive to the ballpark, but All-Star product can be found at other retailers around town as well, including Modell’s, Victoria’s Secret and the Clubhouse Shops, which are operated by Lids.

Lynn LaRocca, senior vice president of marketing for Modell’s, said All-Star product has been in the stores since June and sales have been steady. “But as we get closer to the event and there’s more marketing around it, we expect interest will be drummed up even more. We had a great response in the beginning, and it’s about to reach a crescendo. We’re very happy with it.” She said best sellers so far include T-shirts and caps, which are carried in all stores, and jerseys, which are only in select stores.

In addition to its stores through the New York City area, Modell’s is also the official retailer of the T-Mobile FanFest and Clubhouse Shop. FanFest is being billed as “the world’s largest baseball theme park,” taking up more than 450,000 square feet of space at the Jacob K. Javits Convention Center. It opens Friday, runs for five days and is considered the launch of All-Star week in New York.

Sim said the retail store at FanFest will be more than 10,000 square feet and will include all branded product from the league’s licensed partners.

The cost to attend FanFest is $35, but anyone who spends $100 on All-Star merchandise at Modell’s stores in New York and New Jersey will be given two complimentary tickets to attend, LaRocca said.

Tommy Bahama, one of MLB’s licensees, will have a pop-up shop at FanFest that will feature licensed baseball product, as well as a limited-edition camp shirt the company created for the game. That shirt, in the Mets colors of royal blue and orange, features the All-Star logo and will retail for $158.

In addition, according to Rob Goldberg, senior vice president of marketing for Tommy Bahama, the brand has created special Collector’s Edition shirts that highlight New York baseball legends Willie Mays and Mickey Mantle, as well as the Mets and the Brooklyn Dodgers.

“There are a limited number of autographed Willie Mays shirts that we’ll have at FanFeast,” Goldberg said. He added that the company is also hosting a gifting suite for players.

“We’re really excited about the game,” Goldberg said. “We just opened our flagship store and restaurant in New York City this year, so it’s a big year for us.” The apple for the San Francisco Giants is located within the Tommy Bahama store on Fifth Avenue, Goldberg noted, adding that baseball VIPs will be wined and dined at the store while they’re in town.

Goldberg said that the All-Star Game merchandise has been out a few weeks and “it’s selling really well. And it’s not cheap. We’re expecting it to sell out by the weekend.”

In addition to FanFest, there are several other high-profile events planned before the game.

There’s a Nike sponsored 5K in Prospect Park in Brooklyn on Saturday morning — proceeds will go to the Sandy Relief fund — an All-Star charity concert on the Great Lawn in Central Park featuring the New York Philharmonic Orchestra and Mariah Carey on Saturday night. On Sunday, there is a Futures Game, which spotlights some of the sport’s best young prospects, followed by the Legends & Celebrity Softball Game at Citi Field. Those expected to participate in the softball game include comedians Chris Rock and George Lopez, Jennie Finch, former New York Jets quarterback Boomer Esiason, actor James Denton and others. Former Met John Franco will be captain of the National League, while former Yankee Bernie Williams will be American League captain.

Monday night is the Home Run Derby, with Wright and Robinson Cano of the Yankees serving as captains of the National and American Leagues, respectively. Pitbull will perform on the field and Milano will be signing autographs in the Touch store at Citi Field prior to the game.

On Tuesday, there will be an All-Star Red Carpet parade down 42nd Street where all the players will ride in open Chevy trucks and greet fans. “In 2009, when the game was at Yankee Stadium, over 1 million fans lined the streets,” Sim said.

Then, the night of the game, which will air on Fox beginning at 7:30, “American Idol” winner Candice Glover will sing the national anthem and Marc Anthony will perform “God Bless America” during the seventh-inning stretch.

Sim said the Starter line, owned by Iconix, will be relaunched for fall but Fan Cave on Broadway and Fourth Street will give customers a sneak peek at the jackets on Saturday.