“Slow and steady wins the race” may be fine for tortoises, but what about retailers? Not so much, according to retail consultant AlixPartners.

Alix examined 20 U.S. public companies with revenues of more than $1 billion, based on how often they deliver new products to stores or post new styles on their e-commerce sites.The retailers were separated into two buckets, one slow, the other fast. But fast fashion brands such as Zara, H&M and Mango weren’t alone. By this methodology, stores in the fast bucket weren’t just traditional fast-fashion players who were labeled “fast.”

The retail consultant wanted to learn whether consumers reward retailers for providing newness. “Although we hear a lot these days about fast fashion stealing market share from traditional retailers, what we really think is happening is not fast fashion, but fast any product, as long as consumers recognize newness and feel compelled to check out what’s new. For consumers, fast is really about how often they believe they can find new products in a store,” the report said.

Alix wondered how to let retailers know about their conclusions in the most forceful way possible: that getting products fast is important to consumers. (If any retailer doesn’t know this by now, they may need remedial schooling on same-day delivery, drones and more.)

Obviously, the most compelling reason for a retailer to speed up its supply chain is increased sales. Alix set about learning whether consumers reward retailers for newness.

What Alix found is that the retailers in the slow group significantly underperformed on margin, especially during the promotionally intense holiday season, concluding that slowness contributes to fourth-quarter margin declines.

Fast retailers, on the other hand, have higher operating margins — about 500 basis points. Speedy retailers can hit the gas at the end of the fourth quarter and beat their more lethargic competitors on margin by 10 percentage points, Alix said. 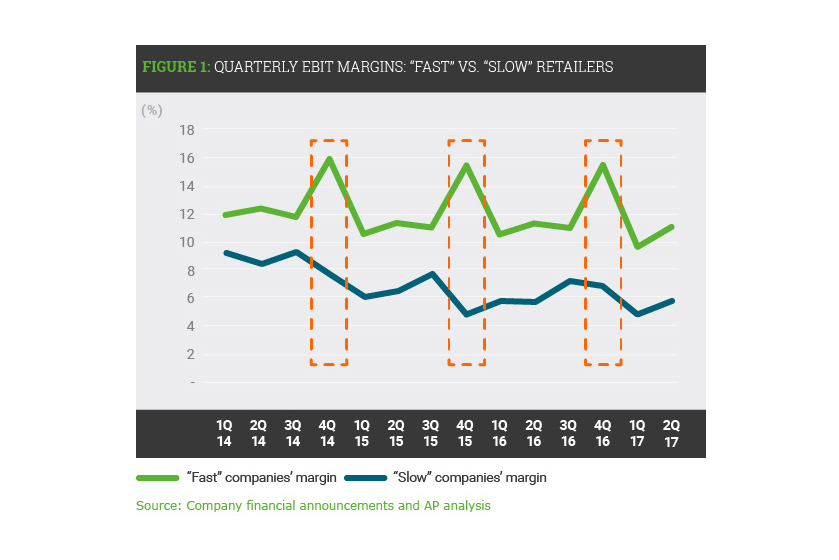 Alix didn’t suggest that getting quicker will automatically boost margins. “Of course it’s not easy or universal,” the consulting group said. “Redesigning an entire organization, including partners and suppliers to orient around speed and newness is a long and complicated process.”

However, even though “we’re staring down the fourth quarter, there may be a few tactics retailers can still adopt to avoid a fourth-quarter margin slump.”

Some of the suggestions include:

“From our vantage point, while getting faster is hard to argue with, the main dimension where speed matters is where it’s felt most by consumers, on the sales floor or computer or mobile screen,” the report said. “Our gut says that the more frequently a retailer can make assortment changes, even minor ones, the more likely consumers will reward it with visits, and if the product is compelling, those visits should turn into revenue and profit.”