Retailers State Their Case for Fall 2013

WWD asks retailers which single collection is their favorite of the season and why. Top fashion merchants from around the world weigh in. 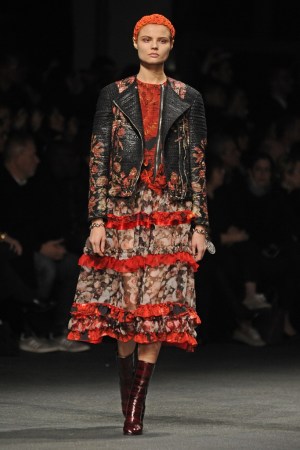 WWD asks retailers which single collection is their favorite of the season and why. Top fashion merchants from around the world weigh in.

Ken Downing, senior vice president and fashion director, Neiman Marcus: “Givenchy by Riccardo Tisci was the fashion moment and the collection of the season. A spectacular collection presented as a spectacular! Rock ’n’ roll biker jackets topping peasant skirts, the biker [jacket] reinterpreted as a midriff and a live performance by Antony [Hegarty] all made for a fashion fantasy that will prove to be the reality that defines the season.”

Sarah Rutson, fashion director, Lane Crawford, Hong Kong: “Sacai is a brand that truly is hitting the big time. Certainly, for Lane Crawford, Sacai has strong positioning and an increasing business, season [after] season. [Designer] Chitose [Abe] is a great talent who has carved out her own dialogue in the fashion landscape. There’s literally a 360-degree approach to her designs and their wearability. She works in a three-dimensional way, so you have to experience the garment from the front, the side and the back. She mixes fabrics with an ease that the Japanese are known for. What’s key is that she’s brilliant at creating a collection that’s fused together with highly unique, technical and innovative design, yet at its heart is easy to [understand]. It’s so desirable and wearable without the sense of overcomplication that would normally be associated with all these elements. Sacai, on every level, is one of the most exciting brands I’ve come across in years.”

Colleen Sherin, senior fashion director, Saks Fifth Avenue: “Phoebe Philo’s creations for Céline were a high note of the season. She moved the needle ever so slightly to offer a new proportion and softness of materials, presenting a collection that was womanly, sensual and subtle. We were immediately coveting the skirts in the most perfect of silhouettes, and the second-skin thigh-high boots are sure to have waiting lists.”

Sarah Andelman, purchasing manager and creative director of Colette, Paris: “Mary Katrantzou. I’m very impressed with her evolution, the new prints she developed and her work in general. Her clothes are beautiful on and make you feel strong in a certain way.”

Linda Fargo, svp of the fashion office and store presentation, Bergdorf Goodman: “Alexander Wang for Balenciaga. And it’s not just because he exceeded the nerve-wracking scrutiny and expectations of the critics, the press and the retailers, but because he actually made the transition look so natural and incredibly elegant. He decoded the house so effortlessly, and created a collection that was sophisticated, sculptural, unexpected, original, balanced, wearable yet editorial and ultimately one that many of us swooned over. He was the season’s dark horse, and he pulled across the finish line like a seasoned champion.”

Daniella Vitale, chief operating officer and senior executive vice president, Barneys New York: “I loved the Dries Van Noten collection. The ‘love affair’ began after seeing the pre-collection in Antwerp [Belgium] and witnessing some of the Top Hat [the London musical’s] inspiration beginning to take shape. All of it culminated in Paris in one of his most beautiful shows. The embroidery, sequins and feathers were so modern on all of the men’s wear fabrics. Extraordinary and inspired enough to go and see the revival of Top Hat in London!”

Stephanie Solomon, vice president of fashion direction, Bloomingdale’s: “My favorite show was Louis Vuitton. Marc Jacobs shared his fantasy of women of the night entering and exiting hotel rooms in states of dress and undress, circa 1930s Paris.”

Paula Reed, creative director, Harvey Nichols, London: “This is a tough assignment. There were so many superlative collections. But if forced to choose, I have to say Christopher Kane. The recent investment by PPR [Kering] enabled him to show his potential to be a serious, big player. There were enough ideas for 10 collections. He embraced the conceptual and the commercial with convincing skill. With so many catwalk virtuosos reconnecting with the DNA of their uberbrands, it was so refreshing to see a relative newcomer measure up with a creative spirit that is still evolving in such a fascinating way.”

Michael Mok, divisional merchandise manager, Joyce, Hong Kong: “I really like Dior this season. It is chic, elegant and sophisticated. I think Raf Simons has invented a new look for Dior.”

Jeffrey Kalinsky, executive vice president of designer merchandising, Nordstrom: “It was Céline. For this particular season, I loved Phoebe Philo’s vision for our customers. When you can see something done really well, something inspirational and so on your wavelength, it’s magical. This collection captured the complete essence of what we see for our customers. The color palate was amazing, breathtaking and very chic. She opened with a lot of light tones and went darker and into navies at the end. It was so modern; it was all about the cut and the combinations. Not only did I love the clothes, but I also loved the accessories. Gray and navy booties and over-the-knee stretch boots will attract a slightly younger customer.”

Tancrède de Lalun, general merchandise manager, Printemps, Paris: “Givenchy. It was the next logical step in the direction established by Riccardo Tisci and yet completely new, offering a jolt of fashion for the season. The collection offered a perfect balance between inspiring and very commercial.”

Suzanne Timmins, svp and fashion director, Hudson’s Bay Co., Toronto: “My favorite was Christopher Kane. He is arguably one of the most imaginative designers today. Perhaps that is why those brain scans were exploding? It was such a compelling collection, his reworked camo, the neo-guipure lace, the fox fur coats, punky kilts and feather appliqués all held aloft by his intriguing technique and use of craft. There is no doubt that Christopher is on a straight trajectory to fashion stardom.”

Nicole Fischelis, group vice president and fashion director, global forecasting, Macy’s: “I really loved Marc Jacobs because I thought it was not only contemporary and luxurious, it was contemporary and supermodern. It was a shining moon that shined light. In a way, it was almost like a moment to think about the season, almost a reflection on all the extremes we had seen. I look at it as putting a new light on the season with all the shine, special effects, iridescent and metallic colors. The very pure silhouettes were very new, modern and very here and now. [The collection] almost had a spiritual connotation. It came at the end of fashion week, when it was time to reflect on what the essentials are and how does one dress. I left feeling very refreshed. It was very complete, great coats, blouses, dresses, must-have bags, etc., etc.”

Nevena Borissova, founder, Curve: “I loved Proenza Schouler. Wearable, fresh, modern, super on-trend and most likely the vintage of the future. I think as an overall collection, it had everything that the new season calls for: It was grown-up, balanced, wearable and beyond on-trend. Their boots and bags—I don’t have to tell you how desirable they are. The accessories seemed to perfectly complement the clothing and the entire image of the collection.”

Polat Uyal, chief merchandising officer, Beymen, Istanbul: “Valentino. The ready-to-wear goes from daywear to evening to furs for a complete luxury message. It caters to fashionable as well as classic clients, and appeals to younger and more mature ladies, too. It is very innovative every season in terms of materials, prints and ideas. Bags, shoes and accessories are also strong categories that enable us to give wider selection within the stores.”

Ed Burstell, managing director, Liberty, London: “[Kenzo designers] Carol [Lim] and Humberto [Leon] proved they are not just world-class trend trackers, but world-class trendsetters. They designed a collection that’s fun, sharp and totally cool. Symbolism has been happening, but they are the first to make it commercial. The same thing with metallic—just look at those shoes—and with texture. And they are the only ones focusing on attracting a slightly younger customer—a real investment in the future of any brand.”