Retailers are responding well to a range of fall looks, from optic prints in bright colors to knitted cashmere leggings.

By Sophia Chabbott on May 1, 2006
View Slideshow 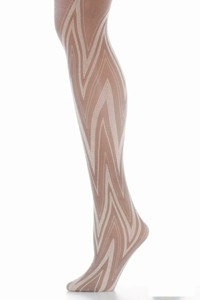 NEW YORK — Legwear is on an upswing for fall, with retailers responding well to a range of looks, from optic prints in bright colors to knitted cashmere leggings.

“Layering is the new uniform for fall, and leggings and tights are a major part of this trend,” said Scoop owner Stefani Greenfield, who allotted more buying dollars to the category. “They will be a key element in everyone’s wardrobe and in our product mix.”

The store picked up hose and leggings from Metalicus, Juicy Couture, Azzedine Alaïa and Missoni, which is produced by Wolford.

“The fashion-conscious customer wants what they see on the runway,” said Ed Burstell, senior vice president and general merchandise manager of beauty, jewelry and accessories at Bergdorf Goodman, who referenced looks at Diane von Furstenberg, Marc Jacobs and Thakoon.

Bergdorf’s is also expanding its hosiery and legging offering. The store picked up legging styles from Theory, Splendid and Diane von Furstenberg. Contrary to how legwear is typically merchandised in boxes, legwear at the store will be sold with the collections and placed on hangers wherever possible, according to Burstell.

Searle owner Steve Blatt has increased the legwear budget for his seven Manhattan stores to $250,000 from $75,000. Searle is adding a new section in its stores called Underpinnings, placed near the shoe department to display the expanded category.

Blatt said that solid-color leggings and tights would do best at retail, but noted that consumers will be looking to build hosiery wardrobes, not just pick up one or two pieces.

“This is not a category where women budget,” Blatt said. “They buy after they already make their fashion purchase.”

Bloomingdale’s bought into brightly colored tights and leggings, in addition to basics.

“[The edgy] styles will sell to our more fashion-forward customer and they will also add interest and pop to the floor,” said Elizabeth Hospodar, divisional merchandise manager for intimate apparel and hosiery.

Saks Fifth Avenue’s mission is to show the consumer how to work the layered look.

“We will style leggings under dresses, skirts and oversized sweaters, and give talking points on how to wear them,” said Elizabeth Kanfer, marketing director for women’s accessories. “To reach our classic customer, we’ll style skirt suits and dresses with opaque tights. We want all customers to understand and embrace this trend, as it is ageless.”

This story first appeared in the May 1, 2006 issue of WWD. Subscribe Today.

Neiman Marcus focused on basic colors such as black, gray, brown, mocha and ivory, plus an added dose of luxury with crocheted sweater tights in cashmere and other luxe yarns.

“For us, Wolford is the luxury hosiery, retailing from $75 to $50, and we see no price resistance,” said Sandra Wilson accessories fashion director at Neiman’s.

StockinGirl, an eight-year-old hosiery firm based here, is having a robust season, providing the legwear and socks to the Marc Jacobs, Tuleh and Sonia Rykiel runway presentations.

“This fall has been unbelievable,” said Ed Miccinati, chief operating office, adding that women wearing leggings are a good springboard to fall sales, easing consumers into the trend. “We’ve had increases of at least 100 percent over last year.”

Henri Bendel’s Fifth Avenue windows last week were centered on footless tights by StockinGirl. For fall, Bendel’s is launching a pop-up legwear shop in one of the store’s most trafficked apparel areas.

“Basic leggings are a must-have item this season and we definitely see the momentum carrying through for fall,” said Ed Bucciarelli, chief executive officer and president. “[Leggings are] a category that’s driven by texture, hand and pattern, and the woman who is buying into it at Bendel’s is the trend-driven consumer rather than the basic hosiery customer.

“So this season, in particular, creative displays and a boutique environment are critical to showcase the product, rather than relying on a more traditional packaged presentation,” he said. “It’s an irresistible little impulse item that makes a strong visual impression in the department and our customer has been snapping them up in multiples.”