The promotional cacophony grew louder as stores blasted higher markdowns and escalated their appeals to shoppers. 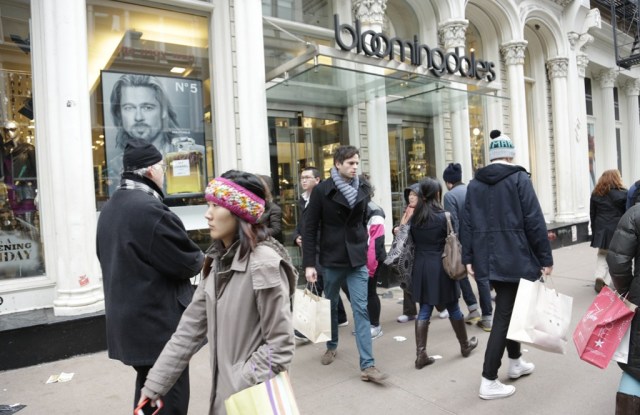 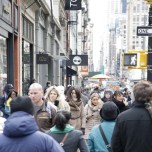 Retailers are not giving up on the holiday season.

This story first appeared in the December 27, 2012 issue of WWD. Subscribe Today.

It’s been disappointing so far, but on Wednesday, the day after Christmas, the promotional cacophony grew louder as stores blasted higher markdowns and escalated their appeals to shoppers. In the days ahead, they’re hoping for a rush of consumers responding to steep reductions on seasonal leftovers, redeeming gift cards, making returns and impulsively buying early spring and resort merchandise that recently began appearing on the selling floors and will continue to flow in over the next month.

Retail analysts and trade organizations stuck to their forecasts for the holiday season, which are generally conservative, from 2.5 to 4.5 percent ahead on a comparable-store basis, though most are on the lower side of the range.

On Wednesday, Joe Fresh and Scoop advertised up to 75 percent off; Vince Camuto, Crate & Barrel and ABC Carpet & Home were all offering up to 60 percent off; Coldwater Creek said everything was half off, and jcrew.com offered an extra 20 percent off on final sale items. Saks Fifth Avenue had a designer sale at up to 70 percent off, and a “fashion fix” flash sale online at up to 80 percent off, while Express promoted an end-of-season up-to-50-percent-off sale.

“The week after Christmas is one of the biggest weeks of the year and, given the bargain hunting mentality we’ve seen these last few weeks, we could see some strong shopping levels over the next few days,” said Matt Shay, president of the National Retail Federation.

“Retailers are mindful, however, that Americans are watching Washington very closely, and the impact of the talks over the fiscal cliff could cause some slowdown in consumer spending as we head into 2013. At this point though, NRF is not revising its forecast of 4.1 percent growth,” added Shay.

Broadlines retailers posted smaller declines, with one of the few exceptions to the downward drift coming from J.C. Penney Co. Inc., whose shares rose 4.4 percent to $20.75. Penney’s has reportedly drawn better traffic in recent days, after stepping up its advertising and newspaper inserts and beginning to explain its pricing better.

Word of clearance activity in Target’s promotion of designer merchandise in collaboration with Neiman Marcus made only a small dent in Target Corp.’s performance. Its shares were down 0.6 percent to $59.21. Neiman’s is privately held.

U.K. markets were closed for Boxing Day Wednesday, while other European and most Asian markets were shuttered in extended observance of Christmas.

Citi analyst Deborah Weinswig expects U.S. mall traffic in the final week of December to rise between 3 and 5 percent after declining 2.7 percent last year. “We believe retailers resorted to unplanned promotions in the final weeks of the season to overcome high inventory levels and fragile consumer confidence around the fiscal cliff,” she wrote in a research note.

The pressure on stores was dramatized by a report from ShopperTrak Inc., which showed that traffic in enclosed malls during the week ended Dec. 22 was down 9.1 percent, a reversal of the 12.6 percent increase in the corresponding week in December 2011.

The International Council of Shopping Centers continues to expect an acceleration in sales during the final week of December, resulting in an increase of between 4 and 4.5 percent for the month and 3 percent for the combined November-December period. For the week ended Dec. 22, ICSC reported a year-on-year same-store increase for chain stores of 3.2 percent and growth of 0.7 percent versus the prior week.

“I suspect when the dust settles the numbers will look better than the feeling a lot of people have right now,” Michael Niemira, vice president of research and chief economist for ICSC, told WWD. “For one thing, this year’s numbers are up against very tough comparisons from a year ago. Overall, it will be a decent season, although weaker than what we’ve seen the last couple of years.”

One factor that bodes well for retailers is a lower holiday shopping completion rate going into the final days before Christmas, compared to a year ago. That could mean an increase in last-minute purchases of gift cards, leaving a greater portion of dollars to be claimed by retailers in January.

“Ordinarily, you see a large wave of redemptions in the first three weeks after Christmas,” Niemira said, “and it generally peters out after that. This year the redemption tail might be a little bit longer.”

While the interest in gift cards has increased, just 50 percent of those who receive them end up spending the full amount of the card, according to Retailmenot.com, an online coupon site. That’s based on findings from a survey conducted between Dec. 3 and Dec. 10, among 1,106 U.S. residents ages 18 and over.

“Consumers are leaving money on the table by not using the total value of their gift cards,” said Trae Bodge, senior editor of the Retailmenot blog. “End-of-year clearance sales after Christmas are the perfect opportunity to get some great last-minute deals.”

The survey, conducted by The Omnibus Co., indicated that 75 percent of consumers polled either sometimes, frequently or always take advantage of end-of-the-year sales. Only 7 percent said they never shop the end-of-year sales. Of consumers wanting to make a big purchase, 31 percent wait for year-end clearance sales because they anticipate last-minute deals.

Online retailers are taking sales and traffic away from brick-and-mortar stores and continue to track double-digit gains, even though consumers are apparently no more enamored of the sites this year than they were last year. At least that’s the conclusion of ForeSee, which specializes in customer experience analytics. The company surveyed 24,000 consumers during the prime holiday shopping season between Thanksgiving and Christmas about the top 100 U.S. e-tailers and said the satisfaction level came in at 78 (on the 100-point scale), on par with last year’s aggregate score. Consumers were queried about merchandise, functionality, content and price.

ForeSee said that Amazon is still head of the class, with a score of 88 for the second consecutive year, the highest score by any retailer measured in the holiday index since 2005.

ForeSee said that merchandise is a top priority for two-thirds of the retailers and, while price is a low priority, just seven of the top 100 companies registered price as a high priority for improvement. But ForeSee also said that 65 of the measured sites should improve merchandise (the appeal, variety and availability of products) to increase overall satisfaction.