After solid Father's Day results, merchants are expecting the momentum to be maintained. 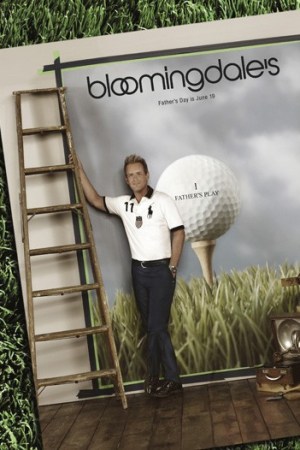 It’s shaping up to be a good fall for men’s wear.

After a strong holiday and spring, where men’s apparel sales outpaced other categories, Father’s Day provided another solid boost to business, buoying the spirits of retailers as they approach the start of the all-important fall and holiday selling period.

Many merchants posted double-digit gains for the period, with casual sportswear items such as knit shirts, lightweight sweaters and shorts leading the way. Interestingly, many stores also saw strong sales of tailored clothing — proof that men are out there shopping for themselves.

According to the National Retail Federation’s Consumer Intentions and Actions Father’s Day survey, conducted by BIGresearch, Americans were expected to spend an average of $106.49 on Dad, up from $94.32 last year and the most in the survey’s eight-year history. Total Father’s Day spending was expected to reach $11.1 billion. “Shoppers seem to be more excited when it comes to gift giving, an encouraging sign for retailers — and dads – everywhere,” said Matthew Shay, president and chief executive officer of the NRF.

Brand Keys, a New York-based brand and customer loyalty research firm, was similarly upbeat. Robert Passikoff, president, said a survey before the holiday indicated that 71 percent of consumers would celebrate Father’s Day and spend an average of $123. Some 23 percent of respondents were expecting to purchase apparel, 3 percent less than last year. “Although you can always count on the perennial Father’s Day tie,” said Passikoff, electronics was seen as the gift of choice this year.

Nevertheless, apparel retailers were upbeat about their results.

Lou Amendola, chief merchandising officer for Brooks Brothers, said he was “pleasantly surprised” with the double-digit increase the store posted for Father’s Day. “I was shocked, actually,” he said.

Amendola said that Brooks planned the season conservatively in light of the rumblings in the market that the economy was going to slow again and due to the price increases on raw materials that caused the company to increase its prices earlier this year. “So we were a little hesitant,” he said. “Shirt prices are up and nobody’s complaining. But our shirts going from $80 to $88 doesn’t change somebody’s life. It’s more of a factor for the entry-level price points.”

In addition, he said the “trend toward preppy clothes is working in our favor.”

For Father’s Day, the big jump in business “came out of men’s sportswear and clothing, and the furnishings side was number three, although that’s usually number one.” Traditionally, dress shirts and ties are what people gravitate toward, he said, but this year it was more sportswear, including knit shirts, sweaters, casual bottoms and shorts.

“And tailored clothing was selling, although we think that was men shopping for themselves,” Amendola added. “Suits have been a strong business for the season. Before that, they had been struggling. But guys are more serious than they have been in previous years, and they’re wearing formal sportswear, sport coats and suits again.”

He said with the exception of some “daily specials on classifications or items,” Brooks Brothers did not break sale until the day after Father’s Day. “And we decided not to be as rich with the discounts this year, so we were nervous. But people were shopping.”

However, despite the strong showing for Father’s Day, Amendola said he’s still keeping a cautious outlook about fall. “I wouldn’t say we’re bullish, but if we take our time and really focus in on having the right stuff, we can do business,” he said.

Michael Gould, ceo of Bloomingdale’s, said he was “very pleased” with Father’s Day sales. Business was good “across the board,” he said, “with strong performances in both sportswear and furnishings.”

Sales were boosted by a series of “fun events and personal appearances,” including one by golfer Luke Donald, who visited the store on behalf of Polo.

Among the items the store was promoting for the holiday were Duchamp’s navy and white striped cotton dress shirt for $315, a purple floral silk bow tie for $115 and assorted pocket squares for $85. In addition, Bleu de Chanel toilette spray was $110 and a wireless printer from Polaroid Grey Label was $169.99.

Gould said the reaction to Father’s Day didn’t come as a surprise, since men’s has been strong for a while now. “Our men’s business has had a nice beat to it all season long,” he said. “We feel good about the things we’re doing.” And he’s hopeful that the momentum will be maintained into the fall selling season.

Tom Ott, senior vice president and general merchandise manager of Saks Fifth Avenue, said watches, dress shirts and ties, shoes and knit shirts were the top-selling items for Father’s Day and business “was strong from opening price points through to luxury. Luxury gifts were a highlight with Cucinelli, Gucci and Tod’s” among the top performers, he added. “We were pleased with our results, and sell-throughs on new summer deliveries were the best.”

Jonathan Greller, senior vice president and general merchandise manager of men’s for Lord & Taylor, was also pleased with Father’s Day results. “The momentum is continuing,” he said, noting that tailored clothing from labels including Lauren, Calvin Klein and DKNY, as well as shoes, led by Steve Madden, were among the best sellers. “Men’s sportswear was good, as well,” he added, with Polo and Black Brown 1826 among the best sellers. “In fact, every classification had positive results. Shorts led the way, and sales far exceeded our expectations. And we’re in a real good inventory position there to transition to fall.”

In all categories, however, he said, “it’s still about price-value. Consumers continue to look for value at every price point.”

To lure men in for Father’s Day, the store teamed with Nautica, Perry Ellis and Steiner Sports and brought former New York sports stars Bucky Dent and Anthony Mason to Lord & Taylor to meet customers. “The results were terrific that night, but what’s most important is that we’re engaging the customer,” he said.

Greller expects that fall sales will continue to be good. “There’s no reason it should change at Lord & Taylor,” he said. “We hope total retail sales will increase and we get a bigger piece of the pie. We just need to stay aggressive and keep our foot on the pedal.”

He’s not especially concerned about rising retail prices or rumblings of another economic slowdown. “If we stay positive and show the consumer that we have terrific brands, it should be a win-win for both of us. There are a lot of opportunities out there and we expect to continue with the positive momentum.”

Richard Arnstein, executive vice president and general merchandise manager of men’s wear for Macy’s, said he was “happy with the consistent performance across many families of business” for Father’s Day. “We exceeded our plan expectations.”

He said top performers included clothing, dress shirts and basic furnishings along with shorts, wovens and golf apparel. “We were very happy with the performance of our exclusive Greg Norman collection,” he said.

To promote the holiday, Macy’s hosted a series of men’s Style Events in the two weeks prior to the event, featuring fashion presentations of the latest trends, drinks and appetizers. A number of sport celebrities also visited the store.

Arnstein said the strong performance for the spring season gives him optimism about the future. “We’re going to take it one day at a time, but we look forward to a good fall season.”

Men’s has also been a bright spot for J.C. Penney. “It was one of the better businesses in the store in May,” said Steve Lawrence, executive vice president and senior general merchandise manager. Men’s apparel was among the hardest hit during the recession, he said, “and we’re not completely out of the woods yet, but there’s a return to male shopping.”

Penney’s went after Father’s Day business with a “multipronged attack,” he said. The store was aggressive with its direct marketing campaign — “Who’s Your Daddy?” — which presented a “strong style message and price point reassurance.” The campaign focused on polos for $9.99, St. John’s Bay fashion T-shirts for $7.99, patterned sport shirts for $9.99, and American Living cargo shorts for $50.

“There were three big buckets,” said Lawrence. “We focused on the strong heritage of our private brands with timeless classics such as the perfect polo or cargo short, as well as national brands such as Nike, Dockers and Izod.” The third push came from Penney’s proprietary labels such as Claiborne and JOE.

In addition, the retailer launched its first spring campaign with ESPN for Father’s Day called “Everybody Wins.” It included radio and digital components as well as television commercials featuring the network’s sports journalist Kenny Mayne and employing a split-screen format. One side featured a traditional Penney’s men’s wear ad, while the other showed clips from sports or movies such as Phoebe Cates exiting the pool in “Fast Times at Ridgemont High” with a Van Heusen dress shirt on the side.

“It shows a dry sense of humor,” Lawrence said, noting that 70 percent of men’s wear purchases are now made by men. “That’s a path we’ve been on and we’re building on it,” he said.

Todd Barket, owner of Unionmade stores in San Francisco and Santa Monica, Calif., said, “We had an outstanding holiday in both stores. It’s definitely interesting, and I think as fall goods arrive it will only get stronger. We had a lot of wives come in with lists of what their husbands wanted.”

Among the Father’s Day bestsellers at Unionmade were surf trunks from Saltbox, plaid and madras oxfords from Gitman Vintage and Alden shoes.