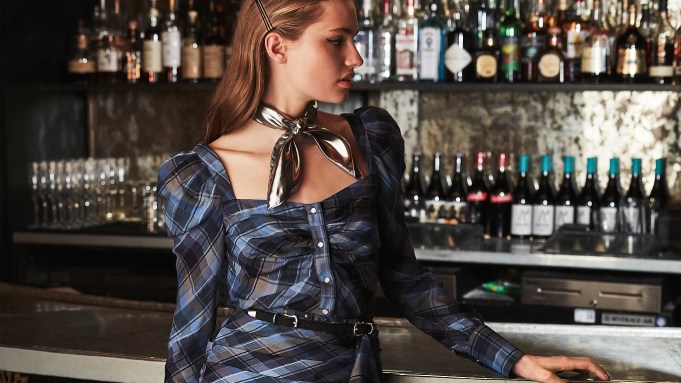 What a long, strange week it was.

With New York Fashion Week: Men’s melting into women’s, the season felt endless to retailers, who said the spark was missing from the week, along with some of the big names. A challenging new venue to navigate, Spring Studios, and many off-calendar and off-runway events added to the impression that New York Fashion Week, which ended Feb. 16, seemed to be fraying and in disarray.

There were, however, positives. The absence of some established brands allowed newer talents that might otherwise have been overshadowed to attract the attention of buyers. Promising collections were seen bubbling up in the contemporary market, where there’s been a void.

“This New York Fashion Week was really one for the books. It was a strange fashion week, really surreal,” said Roopal Patel, fashion director of Saks Fifth Avenue, who is generally one of the week’s most ardent boosters. “It was a bit lackluster as we scan the week. It felt like everyone was beating their own drum. There’s sort of a new direction that NYFW is taking and it’s very confusing. The last seven days didn’t have the same energy that New York is known for.”

“We’re in a very strange time for fashion,” said Marina Larroudé, Barneys New York’s fashion director. “Everything is oversize. It’s not sexy or pretty, and the women on the runways are not pretty. At Marc Jacobs, certain gals are striking, but not necessarily attractive like you’d see at Balmain.

“Superbig blazers and shrunken shoulders — it’s not a time in fashion that’s romantic,” Larroudé added. “The imagery is not how it was, say, two years ago, with lace blouses and supersexy collections out there. Now it’s cool and young. A hoodie is a hoodie. Younger clients are buying it. It’s an evolving time for fashion. These are different times.”

There was concern about the future of NYFW, given the absence since last year of high-profile names such as Altuzarra, Proenza Schouler, Rodarte and Thom Browne, who decamped to Paris, with the addition of Public School, Creatures of the Wind and Baja East, which were absent from the runway calendar.

“It’s so peculiar, there’s not only no buzz around NYFW, there’s antibuzz,” one industry executive was overheard saying.

“Overall, there was a feeling of, ‘OK, where is this going to go,’ because it seems so many people are on their way out of New York and showing in Europe,” said Coco Chan, head of women’s wear at Stylebop. “Raf Simons [at Calvin Klein] and Marc Jacobs delivered the goods, but they’re established  brands. There was a bit missing in the middle.

“From a buyer’s point of view, it becomes a bit of an issue if there are more defections,” Chan added. “When so many brands present their collections for sale in Europe, the question becomes, ‘is it worth going to New York just to sit at a show you may even not buy into?’ Years ago, you had the same problem with London.“

Chan was referring to London Fashion Week in the late Aughts, when the city’s schedule was clipped by the Paris and New York schedules and many of its high-profile designers defected to the other fashion capitals. London struggled for several years to regain its status as a fashion hub.

“While New York has always had the commercial power, it’s still wonderful to feel inspired, and unfortunately, that didn’t happen much last week,” said Beth Buccini, owner and founder of Kirna Zabête. “The exceptions were Calvin Klein and Rosie Assoulin. NYFW is certainly not the same without Proenza Schouler and Altuzarra. But it’s far past the time for the shows to better reflect our modern world and the realities of our business. I always love the video and presentation format. The old-school runway show feels more outdated than ever.”

Linda Fargo, senior vice president of the fashion office and the director of women’s fashion and store presentation at Bergdorf Goodman, said for all the deeper changes confronting the industry, NYFW didn’t move the needle on trends much, which has necessitated a new approach. “We’re starting to buy with a new eye, looking less through the lens of the collection model, rather with a new focus on small emotional items, cherry-picking from emerging names and micro-trends.”

“I don’t think there’s any new trends that will get people into the store,” said Kelly Golden, owner of Neapolitan Collection in Winnetka, Ill. “There’s a certain amount of cherry-picking that needs to be done. Milan’s been really inspirational, and London, too. New York is basics and commercial looks you know will sell. You get the emotion and fantasy and feeling of, ‘this is why I do what I do’ from the international fashion weeks.”

“In the past, Daniëlle Cathari wouldn’t have made such a big splash [with her Adidas Originals collection], nor would Eckhaus Latta have had gotten so much attention. New York could have the opportunity to show the new generation,” said Chan. “In recent years, the new generation of designers are a much more creative force. There’s sort of a balance and it makes New York still worthwhile.”

Kim Bui Kollar, fashion director and director of special projects at Pedder Group, the accessories arm of Lane Crawford Joyce Group, said Nanushka, Jonathan Simkhai and Trademark answered the call for sophisticated, pretty and effortless apparel. “I see this as a growing opportunity for them to take some market share from the more established 3.1 Phillip Lim, Alexander Wang and Jason Wu.”

NYFW, which has been looking for a home that satisfies all its constituencies, seemed unmoored last week. “It feels more disorganized than ever,” said Golden. “Bloggers having a voice is really hurting the industry because there are no standards. Bloggers are taking away New York’s importance as a fashion capital.”

Golden also said streetwear’s presence has grown too large, and may have contributed to the decision of some designers to leave the city. “Showing an elevated brand  like Rodarte alongside streetwear brands doesn’t make sense,” she said of the label, which shifted its strategy to Paris last year.

While the see-now-buy-now debate has more or less receded, retailers are still talking about the pros and cons of runways and the NYFW calendar.

“Fashion week is feeling like an antique. Unfortunately, we seem to go back to antiquated ideas of how to present collections season after season,” said Ken Downing, fashion director and senior vice president of Neiman Marcus. “How mundane much of this has become begs the question of, how relevant is a fashion show.”

“The audience for fashion shows is so much larger than it was 10 years ago,” said Heather Shimokawa, vice president and fashion director of ready to wear at Bloomingdale’s. “There are so many more people to accommodate. There’s something magical when a collection is presented almost like a mood board.”

“If you’re in this business, you need to be objective,” said Nicole Fischelis, a consultant and former group vice president and fashion director at Macy’s. “There’s three more countries to see. Business is difficult. There’s enough in New York. Everybody needs to support this new generation.”

“We’re going to support all the brands we love even more,” said Silvia Merati, chief merchant at Intermix, citing Tibi, Alexander Wang and Derek Lam as her top three collections.

Mario Grauso, president of Holt Renfrew, said the retailer’s open to buy for New York is edited compared to Paris and Milan, but “meaningful for the designers that got it right.”

“We need to show off American fashion and talent two times a year with all possible American designers showing in New York, preferably in February and September,” said Jeffrey Kalinsky, designer fashion director of Nordstrom. “It would be a win-win for everyone.”

“Alexander Wang will set a precedent that everyone will follow,” said Golden. “He’s going to show twice a year only, in December and June. I’m hoping a year from now everything will be sorted out because this [chaos] is just too much.”