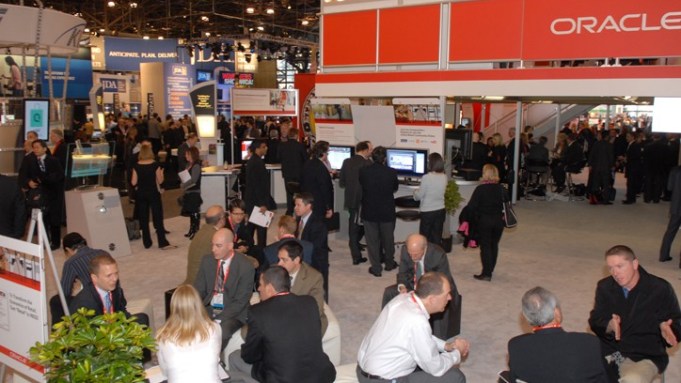 In the retail world, the technological revolution has only just begun.

Major initiatives are under way in cloud computing, social media and mobile that have the power to upend the business. Here is the vision: Retailers — and, not incidentally, apparel makers and consumers — will get any kind of computing power they need from the “cloud” — which provides an application or service available to anyone at any time as long as they have an Internet connection. Everything will be knitted together by social media and accessible from any mobile device anywhere. Call it the third-wave Web.

The result could be new competitors, and a blurring of the distinctions between customers, designers and retailers.

Examples include user-designed clothing and inexpensive, easy-to-use point of sale systems that small retailers can log onto online — or from their iPhones.

Five-year-long implementations of business software will be history, as will the need to maintain a data center. Startup and operating costs will fall dramatically, and small companies and individuals will have access to previously unaffordable resources such as enterprise-level security.

Take ShopKeep.com. Still in beta test mode, this cloud POS for small retailers is cheap and easy to use, yet it has the security of a big company because it is hosted by Amazon.com (on its own cloud offering, Amazon EC2). Two other behind-the-scenes partners provide secure credit-card processing and full PCI compliance.

ShopKeep.com’s founder and chief executive officer, Jason Richelson, who owns two wine and food shops in New York and previously worked in technology integration for PricewaterhouseCoopers, plans to add social media features soon but is still deciding what they will be. For example, when a retailer adds an item to inventory, she could click and automatically export a photo and description to Twitter or another social site, enabling consumers to see it almost immediately.

Another possibility is a news ticker that automatically searches the Internet for mentions of products and descriptions in inventory — so the storekeeper would get an alert if, say, The New York Times ran a story about an item in stock, such as United Bamboo’s limited edition cat calendar. Then she could blog about it and link to the Times article.

Still another possibility is integration with a localization service such as Milo.com’s local search or Foursquare’s GPS-based reviews and social network for mobile phones, both of which help shoppers discover new retailers.

Future versions will work with Intuit’s QuickBooks and an e-commerce platform, said Richelson.

The price has not yet been set, but Richelson is considering starting at $50 a month for one register. (The beta is free for anyone who wishes to sign up.) There will be no lengthy sales process; as with Salesforce.com, Gmail and other cloud services, users just sign up online and start using the product. Retailers don’t have to set up a server in the back room, and support is included.

A wide variety of cloud services are already available today, including personal productivity software, enterprise applications and niche software aimed at the apparel industry. The application or service is hosted and available on demand through a Web browser at any time, as long as the user has an Internet connection, and the user’s data is stored remotely by the host. Examples are any Internet-based mail service such as Gmail or Yahoo Mail, and Google Docs, which offers free spreadsheets, presentations, word processing and other office tools that can be accessed from anywhere on the fly and shared with anyone simply by typing in the person’s e-mail address. Social software such as YouTube, Twitter and Flickr are other examples.

In the area of POS alone, there are at least nine others beside ShopKeep, including KWI, MerchantOS and NetSuite, funded by Oracle ceo Larry Ellison. In addition to POS, NetSuite also offers a full suite of business software, including financials, CRM, inventory and e-commerce.

Government agencies and companies in industries such as banking and health care are already experimenting with cloud services.

At the National Retail Federation conference in New York last week, the association’s standards arm, ARTS, touted the idea, as did major companies such as IBM, which has published several white papers on the topic.

“The next industries to adopt cloud are likely to be retail, utilities, manufacturing and transportation as new cloud applications are developed and become available that address their ERP [enterprise resource planning], logistics and BI [business intelligence] needs,” the company said in one of its papers.

In the apparel world, it’s a cliché that multibillion-dollar businesses run on spreadsheets, and need to upgrade to enterprise software that anyone in the company can view. This is true, but now cloud software as simple as Google Docs or as enterprise-oriented as NetSuite can at least partially solve the problem more quickly and less expensively.

Richelson said his two stores recently switched from Microsoft Office to Google Docs, partly because it can be accessed from anywhere.

Likewise, with ShopKeep, store owners can check store operations — and see how much cash is in the drawer — from anywhere at any time.

In a test of cloud computing for software development, IBM saved 65 percent on hardware, 27 percent on software and 45 percent on operations.

“Cloud computing is a massive trend in IT,” said Neeraj Agrawal of Battery Ventures at an NRF panel on the future of retail. “Broadly speaking, what’s disruptive is how much lowering the cost side will accelerate movement into the cloud and make it easy for retailers to try new things.”

“Cloud computing will reduce retailers’ need for IT staff,” said fellow panelist Howard Morgan of First Round Capital. “You don’t have to run a big data center 24-7. You can outsource a lot of the physical aspects of managing a data center to the cloud and focus on your mission-critical retail systems.”

Panel moderator Brett Hurt, founder and ceo of reviews company Bazaarvoice, likened cloud computing to the creation of the credit-card industry, which massively changed retail and how people purchased goods. “Cloud computing will create disruption in a lot of different areas for retailers, and it will be difficult to project and react to this,” he said.

The cloud is also transforming product design, which has repercussions for retail. A long list of companies, from Nike Inc. to The Keds Corp., offer shoppers the ability to customize products online, and small designers are already tapping the power of the cloud to design, produce and market apparel.

For example, handbag designer Andrea Tobin of Marla Cielo raised $4,000 on Kickstarter.com to produce a line of one-of-a-kind clutches fabricated out of a mural she painted. Individuals who donated $295 or more received a signed and numbered edition of one of the 50 bags, a photograph of the mural and an invitation to a party for the owners of the bags.

A handful of artists are using the Keds platform to start small businesses on the site. Anyone who creates a custom Keds shoe receives 10 percent of the sales if someone buys their design.

Designers, crafters and home sewers — thanks to the cloud, the categories are blurring — can custom print fabric with no minimums on sites such as Spoonflower. On Spoonflower, they also receive 10 percent if someone else uses their design, and buyers can alter the repeat of a design they purchase. Visitors can vote on the “fabric of the week,” and a constantly changing patchwork of patterns shows Spoonflower designs on Flickr.

Mass customization is a “new form of competition” for retailers, said Doug Mack, former ceo of Scene7 and now Adobe vice president of hosted and consumer solutions, at an NRF panel on e-commerce. “If you’re a designer at the Gap, you’re competing with the masses. In certain product categories, get ready to compete with the masses.”

There are downsides to the cloud paradigm, such as challenges around security, reliability and integration with existing systems, but they are not unique to cloud computing. Some cloud programs, such as Visuality and ShopKeep, let users work locally when the Internet connection goes down.

IBM’s demonstrations at NRF offered a glimpse into how established technology companies will fit into the new world order. At a time when social media monitoring services are proliferating as quickly as profiles on Facebook, IBM showed a custom service, Cognos Content Analytics, aimed at mid- and high-end merchants and brands. The service combines IBM’s proprietary business intelligence and other software to show thousands of specific examples of Internet chatter about a product, statistically summarize them in myriad meaningful ways, and automatically report what percentage of the chatter is positive or negative.

The company also demonstrated a mobile phone application in partnership with Cisco that recognizes a customer and sends her personalized messages when she enters a store. If she creates a shopping list, the app automatically gives her a store map that shows where each item on the list is located. She can click a button on her screen to call for assistance.

Other related innovations on display at the show included a digital receipt service for Intuit users from AfterBot, and a gamelike widget that consumers play to give retailers and brands insight into trends, allocation and markdowns from market research firm First Insight. Also, unrelated to the NRF show, last week Microsoft and HP announced they would spend $250 million on a joint cloud computing effort.

The use of the mobile Internet is growing quickly. One of the reasons e-commerce has been successful is because e-tailers “realized there is a mobility revolution,” said Forrester analyst Sucharita Mulpuru at a session. Fifty-eight percent of Japanese use it at least once a month. Seventy-four percent of Koreans and 58 percent of Chinese have made a purchase (usually mobile content) through their phones.