Streetwear and sneakers and beauty are the leading categories on the Beyond app.

A page from the Beyond app featuring a Cult Gaia bag.

The minute the lockdown ended in China, the first things Chinese customers scooped up were handbags and shoes, according to Nancy Zhang, head of partnerships in New York for BorderX Lab, the cross-border e-commerce platform for American and European merchants to reach global Chinese customers.

They’re calling this “revenge buying,” making up for a lost two months by buying merchandise for themselves, she said.

Prior to the lockdown ending, beauty, and in particular skin care, were the bestsellers on their mobile marketplace app called Beyond, which caters to 13 million Chinese consumers, mostly between ages 18 and the mid-30s, said Zhang.

Back in February, there was a relative slowdown in China because the country was going into lockdown and quarantine. At that time, they saw a big shift in category demand. Beauty saw a 10 to 15 percent decline, while accessories and ready-to-wear, which had historically been one of its best-selling categories, “started to dive.” Wellness and beauty supplements had a 833 percent increase. “People in quarantine aren’t going out, and there was very little need for handbags and shoes,” she explained.

As the beauty business began picking up, brands across the board performed. La Mer is the all-time best-selling brand on the platform, followed by Estée Lauder, Tom Ford, Chantecaille, Nars, and MAC, she said. They also do well with niche brands like Decorté, Pat McGrath, Hourglass, Smashbox Cosmetics, and Juice Beauty, which has a Goop collaboration.

Eighty percent of BorderX Lab’s business comes from China. The platform, which features more than six million products from American and European merchants, caters to Chinese-speaking Millennials, who are geographically spread out across China, Southeast China, North America and Europe. Eighty percent live in China, and the other 20 percent live mostly in the U.S. and Canada, as well as Europe, the Middle East and Australia. The company is dual-headquartered in Silicon Valley and Shanghai.

She said a brand like Swarovski has done very well with its figurines and jewelry on the site. “They do a lot of advertising in airports as well,” she said. “All travel retail has collapsed, but the marketing and volume comes from global Chinese who travel,” she said.

Three to four weeks ago, business in China started to pick up as the quarantine began to come to an end, and life started to return to normal, she noted. “I have colleagues  in Shanghai who say they’ve never been happier to be stuck in traffic because it means people are going out,” she said. In China, there are still strict laws around traveling, but she read an article Tuesday that showed that people are quickly starting to gather after they relaxed the quarantine laws. “They have a need to be social,” she said.

She noted that their platform in the months of February and March experienced “Black Friday numbers.”

Brands that have consistently done well in the luxury sector are Gucci, YSL, and Celine said Zhang. “From the more affordable luxury market, it’s always been Michael Kors, which has been a big seller for us, Tory Burch, and Coach. These are not surprising. These are brands that have invested a lot in advertising and marketing in the China market,” she said.

Overall, she noted that men’s accessories, watches and small leather goods and sunglasses are extremely strong.

While she hasn’t broken it down by cities, she said Wuhan, where the coronavirus originated, is still quite challenging because it’s difficult to deliver merchandise there.  “What’s really interesting about our platform, we have the highest penetration from the second-tier Chinese cities than the first-tier cities, since first-tier cities have so many more options, when it comes to physical retail and e-commerce and brand recognition.

“Second-tier cities have less access both to trend information and these flagship retailers. As a content platform and community, we find second-tier cities’ residents find our app most useful and interactive and helpful because they’re not necessarily getting access to those brands on their own,” she explained.

She noted that since COVID-19 hit the U.S. and brick-and mortar stores were forced to close, BorderX Lab’s phones have been ringing like crazy to bring more inventory onto the Beyond app. “Since the U.S. stores have shut down, we’ve had a lot of opportunities to help them move product, and we’ve had access to inventory which we normally wouldn’t have,” she said. “This has been the craziest it’s ever been. It’s busier than Black Friday,” she said.

Zhang noted that in 2019 streetwear and sneakers surpassed beauty, which had been their number-one category. Sneaker collaborations from Commes des Garçons, Yeezy, Off-White and Kim Jones have sold well. 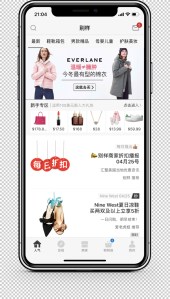 A page from the Beyond app.  Courtesy Photo

In addition to merchandise, the Beyond app also features content. “We have content and we talk about what’s cool and what they should buy. When the user clicks on it, they are able to read and look at the swatches, and look at the reviews and then click to buy,” she said.

The way BorderX Lab makes money is they take a commission anywhere from 10 to 20 percent, depending on the product and the price point, she noted.

Since the Chinese don’t have credit cards, they pay using mobile payments solutions and BorderX Lab pays its vendors with credit cards. “Our vendors are happy because they don’t have to deal with fraud or currency conversion,” she said.

Zhang noted that the beauty category saw a major comeback because people couldn’t go into spas or get facials during the lockdown. NuFace and Clarisonic (facial gadgets) have done well, and she’s found that at-home facials are here to stay. “Rifa and NuFace facial toning and resurfacing have really come out as winners here,” she said. They cost between $200 and $300.

Asked if there are any products they can’t get enough of on the site, she said, “We have a huge shortage of Hermès lipstick. Any retailer that has had it has a low allocation. We would die to have more of it. It’s so in demand, and it’s sold out everywhere,” she said.

In the fashion and accessories area, she’s said a lot of sales have come from Off-White, Loewe and Celine. In footwear and accessories, Stuart Weitzman, Michael Kors, Alexander Wang and Dior sunglasses have been trending very well. She also noted that Marc Jacobs does well, as does Burberry, Kate Spade, Fendi, Marni, and Tory Burch. She said they have done well with Chloe’s logo flats, Dior pumps with ribbons, and Marc Jacobs camera bags.

She said during the lockdown, there was less job loss in China and more of a furlough and people working from home. She said their platform focuses on marketing to Millennials who are on the wealthier side and looking for American and European lifestyle collections. They’re the 1 percent of the 1.4 billion people. Two-thirds of their 13 million customers are male and one-third are male.

Year-over year, the business is running 20 percent in sales, she said.

Meantime, in the U.S., BorderX Lab has been getting a lot of requests from potential new partners, who are seeking distribution avenues for their inventory. “Phones are ringing off the hook. We can’t take meetings and calls fast enough.,” she said.

While they have sales on their platform and follow the market cadence, she said the bestselling products typically don’t go on sale, such as Bobbi Brown, Laura Mercier, La Mer, Estée Lauder night cream, Clinique, SK-II, Fresh and Clarins.

Interestingly, she noted that if a customer buys something from Saks, for example, it gets delivered from Saks to BorderX Lab’s warehouse and they don’t open the package, but ship it directly to the customer, so no one has touched the product. “It’s very much a big concern when it comes to authenticity, especially with handbags,” she said. Everything a customer orders from a retailer comes from their U.S. or European web site. “It’s their lifeline right now because their retail stores are closed,” she said.