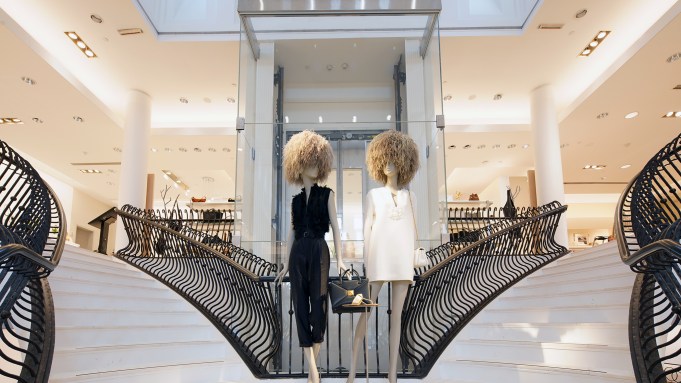 GREENWICH, Conn. — The Mitchells sure know how to show their gratitude.

On Tuesday night the family behind Mitchells, Richards, Marios and Wilkes Bashford joined the other members of the prestigious Forum Group of independent luxury retailers to express thanks to their vendors for helping them during the darkest days of the pandemic.

The event, which included cocktails and a seated dinner for around 100 people, also served as the official unveiling of the renovated Richards store on Greenwich Avenue in this tony town north of New York City.

The mood was decidedly upbeat as Forum Group members, who had been meeting virtually for more than two years, were finally able to reconnect in person. The group — which includes top stores such as Andrisen Morton in Denver; Rubensteins in New Orleans; Malouf’s in Lubbock, Texas; Kilgore Trout in Cleveland; Stanley Korshak in Dallas; Oak Hall in Memphis, and others — all marveled at how strongly business has rebounded in the past few months. Luxury sportswear has been the star but tailored clothing and sport coats have also experienced a significant uptick, they said, as shoppers — new and old — have turned out in droves to refresh their wardrobes for a return to work and to celebrate at rescheduled events.

That has been the case for the Mitchells stores as well, according to Bob Mitchell, co-chief executive officer. The facelift of the Richards store reflects this new reality.

Mitchell said the renovation of the two-level, 27,000-square-foot Richards began before COVID-19 hit and was expected to last around a year, with the store being worked on in phases so it could remain open.

But once the health crisis caused all retail stores to close, the work stopped and didn’t restart until February 2021, he said. Then issues with the supply chain and material shortages took their toll and caused the process to take twice as long as expected. The renovation was finally completed a few weeks ago.

Although the vendor mix remains the same, Mitchell said it was the aesthetic of the store that was dramatically upgraded. “We redid everything and merchandised the store more by lifestyle and brand, whether that includes a stand-alone shop or not,” he said.

The Mitchells bought Richards in 1995 when it was a men’s only store located in an 8,000-square-foot space across the street on Greenwich Avenue. They moved into the current location in 2000 when they added womenswear, which, with jewelry, now accounts for half of the store’s volume, Bob Mitchell said. Overall in the Mitchells company, men’s is 40 percent of sales, women’s is 35 percent and jewelry is 25 percent.

At Richards, the first floor continues to be devoted to men’s, but the design is much more open, bright and modern, he said. “We pumped up the light everywhere,” he said. That includes the shops for the company’s key designer brands, all of which have also been updated. There are renovated boutiques for Zegna, Loro Piana, Brunello Cucinelli and Tom Ford.

Behind Zegna is a room devoted to what Mitchell called the “uber luxury” brands — Kiton, Isaia, Brioni and others — that have long been known for their tailored clothing but have since expanded successfully into luxury sportswear as well. And the boutique mixes both categories seamlessly.

Beyond that is the smaller tailored clothing department that had previously been located front and center inside the Greenwich Avenue entrance, but was shifted back during the revamp. Top brands here include Canali, Samuelsohn, Munro and others. Like the other shops, this one has eschewed the dark wood design of the past for a cleaner, brighter, whiter presentation that “shows the clothes off better,” Mitchell said.

“We’re seeing big increases over 2019 even in tailored clothing,” Mitchell said, adding that “sport coats are stronger than ever” and occasion dressing suits in bright blue and gray, along with tuxedo and formal accessories, have all been “phenomenal.”

The furnishings area has been reduced to make more room for sportswear and while still not at its peak from years ago, business in these categories is improving as men attend more events.

There is a large, comfortable fitting area with a bar and television that has two fitters working with customers on the weekend. And there’s a central cash wrap as well as a spot where customers can sit and have coffee, a drink or a cookie.

Inside the door at the rear, which opens into Richards’ parking lot — the store is the only one on Greenwich Avenue to have dedicated parking with 60 spots available to customers — is the casual sportswear area. Brands include Faherty, Peter Millar, Frame, Rhone, Moncler, Pescarolo, Sease, Fradi, Fedeli and others.

“We thought when tailored clothing picked up, sportswear sales would drop but sportswear is still showing massive increases,” he said.

Ditto for footwear, which has been “dramatically expanded” in the renovation and dominates the space on one side of the floor, Mitchell said. Top brands include Bontoni, Santoni, Tod’s, Loro Piana, Cucinelli and Zegna and he said that while sneakers and casual shoes are immensely popular, dress shoes have also experienced an uptick in interest.

The Tom Ford and Cucinelli shops have been upgraded to those brands’ latest iterations during the renovation.

Although the floor is devoted exclusively to men’s apparel, it includes the women’s jewelry presentation. “That’s been our most consistent growth engine during COVID[-19],” Mitchell said. “And it’s continuing.” He said the store is experiencing increases in designer jewelry brands as well as huge demand in diamonds and colored stones.

Customers climbing the sweeping center staircase to the women’s department on the second floor will also find a brighter and more modern presentation.

Cucinelli, which is Richards’ top women’s vendor, has been relocated to the top of the staircase and there is an outdoor patio space at the rear of the shop. There are designated areas for other top brands including Loro Piana, Akris and Carolina Herrera, as well as an advanced area featuring The Row, Saint Laurent and Moncler. There’s also a VIP room tucked into the back corner.

Right now Richards is featuring a pop-up cabana shop with bathing suits, caftans and other colorful summer merchandise from Zimmermann, Veronica Beard and other brands.

The cash wrap has been relocated as well to make more room for shoes and bags, which Mitchell characterized as “a big growth area for us. We doubled the square footage and it’s proving to be a winner.” Bottega Veneta, YSL, Valentino and Loewe are among the top brands in bags, while in shoes, Manolo Blahnik, Gianvito Rossi and Valentino have been the top sellers along with Cucinelli and Loro Piana, which Mitchell said “shows the power of these brands outside the apparel world.”

The women’s department was renovated in 2010, Mitchell said, but the men’s hasn’t really been touched since the opening more than two decades ago. He said much of the original design, such as the windows and staircase, has been retained.

In addition to the selling space and outside parking lot, there are 100 underground spots for cars and a 6,000-square-foot basement where extra stock is stored.

Although Richards may have been the focus this week, Mitchell said the company is “getting amazing growth from all stores” right now. “Over the rolling 12 months we’re seeing substantial double-digit growth over 2019, even in Seattle and Portland. There’s definitely pent-up demand.”

Mitchells Stores operates its flagship, Mitchells unit in Westport, Connecticut, and another in Huntington, New York, as well as Wilkes Bashford stores in downtown San Francisco and Palo Alto, California, Marios stores in Seattle and Portland and a Marios 3.10 in Tigard, Oregon.

The company was founded by Ed and Norma Mitchell in 1958 as a men’s store in a former plumbing supply shop location in Westport. Over the years the company continued expanding its reach — and upscaling its assortment — as the second and third generations entered the business. Richards was the family’s first acquisition, followed by Marshs in Huntington (which has been renamed Mitchells) in 2005, Wilkes Bashford in 2009 and Marios in 2015.

Mitchell said although the family is often approached about rescuing other specialty retailers that have no succession plan or are seeking more professional management, he doesn’t expect the company to add any other stores to the stable in the near future.

“We’re focusing on the stores we have,” he said. “This is a time of growth like no other, but how long it will last is the question. We believe if the economy can settle down, we’ll continue to see strong growth.”

Massimo Caronna, president and CEO of Brunello Cucinelli North America, said the success of the Mitchells personifies the new world of retailing. “We don’t call them stores anymore, we call them hospitality hubs,” he said. “People today are looking for an experience that is difficult to do online. Post-COVID[-19], they want to feel unique and special and that’s why Mitchells does so well. When you go to their stores, you feel at home. They offer a wonderful combination of product and people, and they inspire me and Brunello to think outside the box. They give us input and it’s our job to listen.”