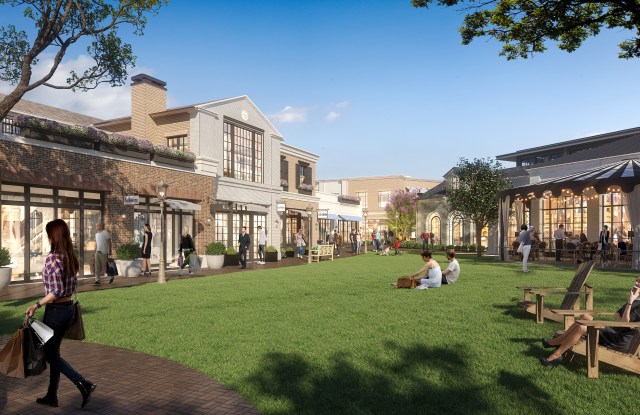 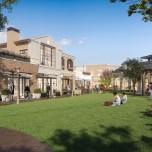 A rendering of Palisades Village including the Bay Theater, as seen from Swarthmore Avenue.

Among the dining tenants are Italian restaurant Madeo’s spin-off F dei M by Madeo — named after the owners’ hometown of Forte dei Marmi in Italy — and Sweet Laurel Bakery, specializing in gluten-free and refined-sugar-free items (their claim to fame is making Gwyneth Paltrow’s birthday cake). A five-auditorium Cinéopolis movie theater and Vintage Grocers are part of the experiential mix.

But this is no sprawling expanse like The Grove or Americana at Brand properties. There are no dancing fountains and trolley tracks. There will be the same number of tenants as The Grove in roughly one-sixth of the acreage. Forty-two retailers will occupy 125,000 square feet of space on the three-acre site, which was inspired by places like Savannah, Georgia, where retail is built around green parks and community gathering spots.

“If you look at the evolution of what we’ve built, every one of [the centers] starts feeling more connected to and part of the fabric of the town around it. Palisades Village is next step where successful retail is going,” said Caruso. “It’s about having that sense of your own village. It’s the right scale, it’s walk-able, and it has the local movie theater and market but it also your fashion shops, food and restaurants being very relevant to the neighborhood.”

The retail mix, he said, is more curated in terms of size and product. “It’s the antithesis of where retail had been, when the philosophy was the bigger and the more enclosed, the better,” he said. “It’s small, safe, quaint and comfortable. It’s also sitting in one of the most beautiful and unique coastal communities in the U.S.”

Pacific Palisades is on the Pacific coast north of Santa Monica and south of Malibu, an affluent but low-key enclave.

“It really is a premium coastal community and we find that the residents there prefer not to have to leave the community if they don’t have to,” said Olliver. Added Zimmermann, “We always try to be in places where our girl lives, or where she likes to travel to.”

Carbon 38 executive vice president and chief marketing officer Lisa Kraynak is herself a Palisades resident. “Carbon 38 was born and bred in Los Angeles. Our corporate headquarters are here, including our design and most of our manufacturing. Launching our flagship retail store here made perfect sense. As an active member of the community, I know Carbon 38 is going to be a perfect match for this location.”

As for the compact size of Palisades Village, is small the new big? “The overall answer is yes,” said Caruso. “We want to make the sales floor as efficient and profitable as possible, so we put stock underneath in the basement. Given where technology and delivery are today, stores don’t need to have the same amount of product to satisfy guests.”

When selecting the tenant mix, Caruso and executive vice president of leasing Kloe Colacarro met with residents to learn what was relevant to the community and chose designers who could bring a different spin to retail and capture guests’ attention.

“We asked about their daily shopping needs, their design preferences,” said Colacarro. “We learned for example, that a lot of residents were shopping at Botanica Bazaar when they vacationed in Amagansett.”

“This store feels like a real investment,” said Kirk Miller, founder and owner of bespoke menswear brand Miller’s Oath, which has a store in New York’s Hudson Square.“It also feels very different because the product and customer is going to be completely different from what I’m used to. The fun bit is how do we take our Savile Row feel and New York sensibility and make that appropriate for the beach?” The new store will offer a deconstructed jacket style, lighter fabrics and other items that Miller is currently wear-testing.

Caruso is also in discussions with larger brands looking to bring localized, personalized concepts that they can service with merchandise from larger stores nearby.

When asked whether his Palisades Village will usher in a new era of retail, Caruso said, “I’m betting on it and banking on it.”