The Ritz’s Head Bartender Colin Field Is Back

Colin Field, the Ritz’s renowned head bartender, and his crew are back in place. 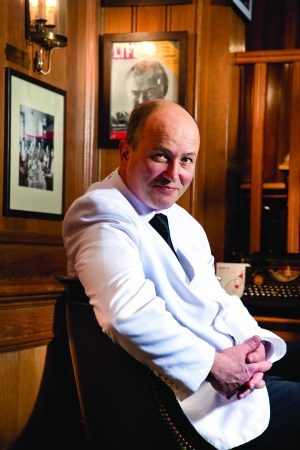 The Ritz’s Hemingway Bar is back at last — and some things seem not to have changed one bit. Certainly not Colin Peter Field, the English-born head bartender, who had mixed drinks for famous patrons at the celebrated watering hole for two decades before the hotel closed for renovations in 2012.

During the last four years, Field traveled the world concocting his fabled cocktails for top bars and private clients.

He returned to the Ritz on June 15, two days after its official reopening, serving his regulars alongside curious novices, as if it were just another night.

Ernest Hemingway hung out at the bar from the Twenties to the Fifties — so regularly, in fact, that he became friends with Bernard “Bertin” Azimont, head bartender at the time, who remained in house for almost five decades. Legend has it the two went fishing together. While none of Hemingway’s works are known to have been written at the bar, it’s been said that Cole Porter composed “Rhapsody in Blue” there.

“You have to make a wish,” a regular sitting on a bar stool instructed as Field poured a Miss Bond cocktail containing Ritz brut Champagne, a dash of raspberry essence and wild strawberries, all topped off with a fresh rose for the ladies. “All those who’re coming back for the first time do…at the first sip and at the last.”

The place feels frozen in time: there is the famous memorabilia — deer antlers, vintage phonographs and typewriters that Field tucked away in his Paris home during the renovation.

The hip and well-known have typed on it (now restored to top shape as Field made sure that the letter keys were well-oiled), including members of the Drop Dead Letter Club, the bar’s literary-minded secret society started by Jefferson Hack, the founder of Dazed Media and Kate Moss’ ex. They compose letters, then seal and entrust them to the Ritz staff for safe keeping until they’re collected by another member.

These days, the photographs of Hemingway and his keepsakes, a signature feature of the bar, are a bit more orchestrated and orderly.

“I wanted each wall to be dedicated to one period of his life,” Field explained, pointing out a propeller hanging on one wall and the period of the author’s life it refers to — the plane crashes he had in 1954.

Beverage-wise there are the same classics on the menu, such as the Ritz Side Car with 19th-century pre-phylloxera cognac, the Ritz Pimm’s and the Bloody Mary featuring pressed ripe tomatoes. One newcomer is the Clean Dirty Martini, whose “recipe will have to remain secret,” according to the menu.

The 55-year-old bartender was sporting a version of his signature white jacket without a collar and with his name embroidered, which he had designed 10 years ago to allow ample arm movement when shaking drinks. (Other bartenders the world over, including at the Halekulani Hotel in Waikiki, Hawaii, have adopted the style.)

“I am not saying it’s the only way to do it, but we don’t do ready-to-wear here,” he explained. “We are in bespoke. It depends on the client and on what a woman is wearing. We’re in luxury.”

Across the hall, at the revamped Ritz bar with an Art Deco decor, Field’s protégée Aurélie Pezet is in charge. The 26-year-old brunette had interned for Bar Hemingway before going to Le Bristol hotel and returning to the Ritz, this time for the much-coveted job of head bartender at the Ritz Bar. She is the first woman and youngest person to hold the position in the 118-year history of the mythic Parisian hotel.

Meanwhile, the hotel’s chief sommelier, Estelle Touzet, selects the Champagnes and wines for the hotel’s restaurants and bars from its cellar that she expanded to 50,000 bottles from 30,000.

There are very few women in the sommelier or bartender business in general. But don’t expect Pezet to mix “girly” drinks.

“I don’t do sugary cocktails with cranberries and strawberries,” she said. But does that mean that she doesn’t do Cosmopolitans?

“Cosmo is timeless,” she answered without hesitation. There’s also the healthy Miss Green mocktail, a modern, alcohol-free twist she serves up with apple juice, cucumber, fresh mint and lime.

Pezet has high demand for cocktails she invented, such as the So British, with Beefeater 24 gin infused with Earl Grey tea, fresh grapefruit, lemon and a dash of elderflower; or the Ritz Manhattan, with red Vermouth, bitters and a Maccallan whiskey from 1990 — a treasure she found in the cellar.

“It’s my year of birth,” she noted wryly, of the Ritz Manhattan drink priced at 68 euros, or $77 at current exchange.

Pezet added of Field: “He’s a whiz, he’s the Mentalist. He can read guests’ minds. That can only be learned with time.”

She’s in the right house for such lessons.