The Ritz Paris Offers No Shortage of Dining Options

Hungry? There are plenty of ways to satisfy one's appetite at the Ritz — just don't forget your wallet. 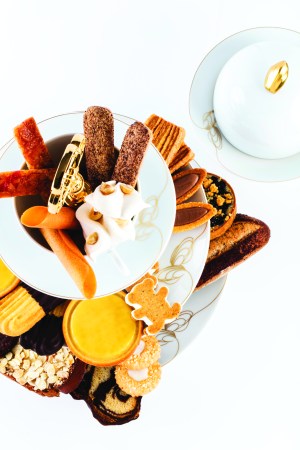 Hungry? There are plenty of ways to satisfy one’s appetite at the Ritz — just don’t forget your wallet.

Dining options range from a tasting menu at La Table de L’Espadon (“The Swordfish’s Table”) for 320 euros, or $362 at current exchange, to a ham-and-butter sandwich at the new Ritz Bar for 18 euros ($20).

Altogether, the hotel includes six restaurants and bars. Novelties include a leafy patio that turns into the winter garden linked to the Bar Vendôme, and another called Les Jardins de L’Espadon (“The Swordfish’s Gardens”) — both of which are bound to be hard gets, especially during nice weather.

Nicolas Sale succeeds Michel Roth in heading up the hotel’s kitchens. The 44-year-old chef ascended the ranks at top Parisian hotels including the George V and Le Meurice, before snagging four Michelin stars at the Kilimandjaro and Le Kintessence restaurants in Courchevel, in the French Alps. Then he took the leap last year from such heights to the Place Vendôme, where at the Ritz, Sale oversees a brigade of 120.

L’Espadon, the gastronomic restaurant, is now composed of three universes: Les Jardins de L’Espadon, whose patio boasts a retractable roof, for lunch; La Table de L’Espadon for dinner in the hotel’s historic dining room, and Les Week-ends de L’Espadon, whose brunch on Saturdays and Sundays is priced at 125 euros, or $141. (The Ritz brunch, meanwhile, will be back in the Salon d’Eté starting in September. “We have to warm up,” said Sale.)

“Guests can typically have a gastronomic lunch in one hour to 75 minutes if they want to,” Sale explained. “Expectations aren’t the same at lunch and dinner. Today, clients’ priority is time.”

Helping to differentiate the various universes are the galuchat-covered menus in different colors: water-green for Les Jardins, gray-blue for La Table, Klein-blue for Les Week-ends and pearl-white for Les Matins de L’Espadon’s breakfast.

Sale said classic dishes are evolving at L’Espadon, with a focus on the product. So now the signature langoustine dish comes in three ways: langoustine juice with grapefruit and garlic caramel; raw langoustine with Beluga caviar, fresh lemon and peppered cream and langoustine roasted with citrus fruits, enoki mushrooms with pistachios and coconut-milk-and-lime nage.

At La Table, Sale invented a new lexicon for the menu. There’s “l’appât,” which was translated as “the temptation” but literally means “the bait,” used instead of the more traditional “amuse-bouche” for an appetizer. There is also “le fil” (“the thread”), which is a side course, and “la touche” (“the touch”) as a pre-dessert.

“The Ritz is a beautiful establishment, but it shouldn’t be a museum. It’s our job to make it live. We have to move with the times while preserving history,” said Sale, who sported a Chopard watch, which he was given when winning his second Michelin star, but no chef’s hat. “Do you see me wearing a hat with my long hair?”

The Bar Vendôme, facing the grand staircase, features a brasserie menu including a grilled filet of sole, a Caesar salad and a Viennese-style veal loin.

Across the hall is the Salon Proust, with its fireplace and large library, where tea à la française — concocted by the head pastry chef François Perret with his team of 20 pastry chefs and six bakers — is served from 3 to 6 p.m. and priced at 55 euros ($62). Before anything else, guests are served a lily-shaped madeleine dipped in vanilla-infused milk. Then tea comes with traditional French biscuits as boudoirs and cigarettes, brioche bread with cocoa beans, marble cake, a range of tarts, plus the madeleine presented on a porcelain display. “I didn’t see silverware fitting in the decor made of marble and woodworks. I was imagining porcelain instead,” Perret said.

He explained that “today’s pastry isn’t yesteryear’s.” For instance, in the lemon tart, he replaced the meringue with a lighter version with less sugar. (One of the hotel’s lesser-known specialties: Perret’s vegan panna cotta with coconut milk, berries, coconut flakes and oat caramelized with maple syrup available via room service. Gluten-free bread is available on request from Paris supplier Chambelland.)

The Ritz Bar features all-day dining with its bistro fare, weekday specials, casseroles dishes and small plates to share in the evening. Starting next year, it will also have a takeaway service, with an entrance on Rue Cambon.