There’s a different dimension coming to Manhattan’s Fifth Avenue and Robert Burke Associates has a lot to do with it.

Fifth Avenue, north of 59th Street, is devoid of retail excluding museum shops and street vendors, but the RBA consulting firm, led by chairman and chief executive officer Robert Burke, is developing a retail format for 815 Fifth Avenue, situated between 62nd and 63rd Streets. The prestigious address has condos designed by architect Thierry Despont and is owned by JHSF, a Brazilian developer of high-end hotels, restaurants and the Cidade Jardim shopping center in São Paulo, often compared to Miami’s Bal Harbour Shops.

“The idea for 815 Fifth is to create smaller retail concepts that are consumer and appointment-based,” Burke told WWD. “This will be more of a showroom concept, with food, retail and residential on the street and second levels.” For now at least, Burke won’t discuss retail tenants for 815 Fifth, which he said would start opening this fall.

Aside from street retail, RBA develops retail concepts for clients that own malls, lifestyle centers, resorts and hospitality services. It’s a global portfolio of projects of varying scope, ranging from Taubman Centers’ $500 million overhaul of the 886,000-square-foot Beverly Center in Los Angeles, to a three-level, 70,000-square-foot shopping center adjacent to the Fasano Hotel (both owned by JHSF), in Jardins, the most affluent area of Sao Paulo, opening mid-2020.

RBA is also working on a small mixed-use project in Palm Beach, Fla., called Via Flagler by The Breakers. It’s owned by The Breakers Palm Beach resort, where nine years ago RBA created a new retail component by adding multi-brand shoe and jewelry concepts to complement Ralph Lauren, Lily Pulitzer, Guerlain and four other stores. Via Flagler has six condos, starting at $12 million, and about 15,000 square feet of ground floor retail divided into 10 spaces, ranging in size from 400 to 3,000 square feet. “We see it as a mix — some luxury, some accessible fashion, food, fitness and services. That’s the road map,” said Burke.

And it applies to many of RBA’s projects. 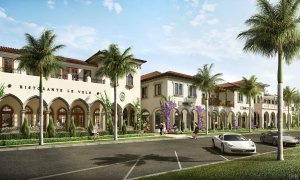 Via Flagler by The Breakers in Palm Beach.

In an interview at RBA offices in Manhattan, Burke; John Dermott Mitchell, president of RBA, and Ron Frasch, president of Ron Frasch Associates, which collaborates with RBA on select projects, discussed their perspective on adapting retail space that RBA has for its property clients. In a nutshell, it’s about scaling it down, taking a “good, better, best” approach with a mix of fashion, food, beverage, beauty, health, wellness, price points and services, and deconstructing that “luxury ghetto.”

“This is basically the approach, no matter what project we are working on,” explained Mitchell. “First we go out and examine who else is in the market, what’s the competition and what they’re doing. It’s a market assessment to see where the opportunities are. Then we conceptualize the retail strategy for our client; what brands are right for the project. We act as a liaison between property owners or developers and the brands.”

The RBA team brings luxury to many projects but leaves room for other categories, creating a spectrum of prices, products and services that the team feels are relevant to how people shop today.

“The customer who buys Chanel is the same customer going to NikeLab and they’re going to Apple and want to go to SoulCycle,” Burke said. “You still have to have fashion. But what we’ve done in these projects is really mixing it.”

Among its 11 active projects, RBA has been developing a retail strategy in Toronto’s posh Yorkville neighborhood, in conjunction with First Capital Realty, the largest retail landlord in the area with more than 400,000 square feet of gross leasable space. Along Yorkville Avenue, on the streets between the Hazelton and the Four Seasons hotels, “We’ve got Canada’s first Chanel flagship. But Off White, Stone Island and Brunello Cucinelli are also there and Christian Louboutin and Versace are coming and we just put a Goop pop-up in,” the natural health company owned by actress Gwyneth Paltrow, Burke said. “It’s fast fashion. It’s street. It’s high fashion and beauty.”

“It’s not a luxury ghetto,” added Frasch. “Some brands have the courage and the confidence to locate their stores outside of the normal Madison Avenue-type of operation, which is good. We help people do that.” 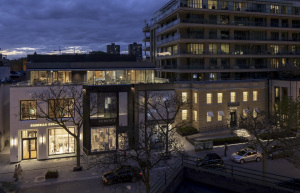 Frasch advocates “humanizing,” or bringing down the scale of, brick-and-mortar retail. “I love small. It feels so valid today,” he said. “Brands that have already put up their flagships are interested in doing something unique. It doesn’t have to be another big flagship. It’s one of the challenges department stores have. They see bigger as better. We see it just the opposite way.”

“People want these intimate environments,” added Burke. “People’s tastes have changed in how they want to shop. This idea of an enormous luxury-only section is just not what they want. Some really good brands are personalizing their stores. Consider Gucci. Their SoHo store is totally different from the uptown store. Chanel is opening these smaller stores. In London, it’s more of a neighborhood store. It’s not always about a huge flagship.”

Developing concepts for retail property owners represents 70 percent of RBA’s business. RBA also helps brands with their positioning and growth strategies, and engages in investment advising. For example, with Canada Goose and its banking adviser Canaccord Genuity, RBA worked on the brand’s market positioning and growth opportunities leading to Bain Capital taking a majority stake in the business. The firm also was hired by Castanea Partners to assess taking a stake in Proenza Schouler, which it did. Castanea got out of the investment in November.

For Farm Rio, a Brazilian fashion brand, RBA created a strategy and orchestrated its entry into the U.S. involving launching the brand on Shopbop and opening Farm Rio’s first U.S. store, in Manhattan’s SoHo neighborhood in April.

RBA is working on a retail concept for a multiuse building in Vancouver on Haro Street, owned by a Chinese group, and a luxury expansion to Taubman Center’s Green Hills shopping center in Nashville.

And Nordstrom engaged RBA in the early stages of planning its upcoming Manhattan women’s flagship, to help differentiate it in terms of zoning, brand mix, distribution and adjacencies.

The career paths of Burke, Frasch and Mitchell intersected at one point or another. Burke and Frasch worked together at Bergdorf Goodman, when Burke was senior vice president of fashion and public relations, and Frasch was ceo. More recently, Frasch was president and chief merchandising officer of Saks Fifth Avenue where he engaged RBA on projects such as the opening of Saks in Kazakhstan. Frasch is also an operator partner at Castanada Partners, working with portfolio companies on strategies.

Mitchell, a lawyer, was the attorney for GFT when Frasch ran GFT USA and Mitchell has been a partner at law firms representing luxury brands and conglomerates, such as Giorgio Armani, Bulgari, Calvin Klein and others on licensing and distribution.

Between the three, there’s brand knowledge and street smarts which they took to Taubman’s Beverly Center in Los Angeles five years ago. “This was a flagship property that needed help,” recalled Frasch. “It was dark and dusty.”

“From the perspective of brand adjacencies and zoning, it really needed cleaning up. The space had to be reorganized,” added Burke. “The food was not good food, and the street level said nothing about fashion.”

Beverly Center was losing business to hipper and chicer Los Angeles venues, such as The Grove, Westfield Century City, Robertson and Melrose Avenues and Rodeo Drive.

“Back then everybody was thumbs-down on malls. We met with 20 to 25 brands at Beverly Center to get their views and it was an eye-opener. Everyone wanted to get on the cool streets,” said Frasch.

In Beverly Center, “Everyone wanted to be next to Apple,” Frasch added. They were less interested in being next to Chanel.

“When you think about that luxury lineup of Dior, Fendi, Cartier, you’ve seen it everywhere in the world. It’s become boring,” Frasch said.

To correct the problems, “We worked directly with Bill Taubman [chief operating officer] and his team on everything from architectural elements to zoning and brand mix,” said Mitchell.

RBA took a “good, better, best” approach, luring such stores as APM Monaco, Balenciaga, G-Star Raw, Hayden Girls, If & Co., and Zara, and Apple relocated to the heart of the luxury floor. An elevated food offering, outdoor dining, landscaping, a huge skylight and views of Hollywood Hills were added.

“We were really successful differentiating Beverly Century from Century City and The Grove,” said Frasch.

The Webster, a highly curated, multibrand retailer, is opening on Beverly Center’s street level in early 2020. According to Burke: “That sends a message that this is a fashion center.” 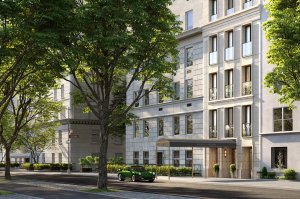 An innovative retail concept is coming to 815 Fifth Avenue.