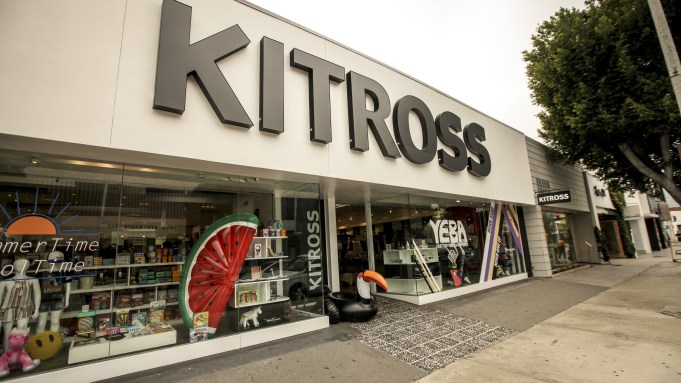 LOS ANGELES — Robertson Boulevard is still an attraction in some tourist guides — although those really should be updated.

The two-block stretch between 3rd Street and Beverly Boulevard has been bruised by vacancies in the shadow of Los Angeles’ glitzier thoroughfares such as Rodeo Drive, or cooler hot spots Melrose Place and Abbot Kinney Boulevard. But recent deal activity could signal a new chapter for the street.

Among the more recent departures are Zimmermann and Anya Hindmarch — both of which left for Melrose Place — and Tory Burch to Rodeo Drive. Hale Bob left in December, with founder Daniel Bohbot telling WWD earlier this year the street lacked the foot traffic and eateries necessary to attract shoppers. Some brands looking for real estate are hesitant to make a move.

“Robertson feels a little weird to me right now so I want to go and see how Melrose is evolving,” Kit and Ace cofounder JJ Wilson said on a recent trip to the West Coast. “The grapevine has it that Melrose [Avenue] is the new Robertson and it’s making a comeback.”

That’s been said before, when Alexander McQueen opened on Melrose Avenue in 2008 followed by Vivienne Westwood, Kelly Wearstler and APC in 2011, 2012 and 2014, respectively. So it depends on whom you ask, although recent deals would seem to indicate Wilson may be right. Dean & Deluca, Zadig & Voltaire Paris and Catch NYC are among some of the street’s incoming tenants.

The downward spiral of a street such as Robertson, through which tour buses used to drive, didn’t just happen overnight.

The street became prominent with the rise of Kitson and the celebrities and paparazzi it attracted, all of which helped usher in a wave of contemporary and premium denim brands, such as Curve, Hindmarch, BCBG and Paul & Joe. Some of that’s still there with French contemporary labels like The Kooples. But brands that may have historically flocked to Robertson are now going to streets such as Melrose Place, following the paths of Vince, Diesel, Frame and Los Angeles label Cotton Citizen, which is set to open a store just off of the street on Friday.

Landlords dug their heels in the sand during the recession, refusing to come down on rents and opting for short-term leases. That, coupled with leases coming due in 2008, 2009 and 2010, made it easy for tenants to leave the street. Newmark Grubb Knight Frank executive vice president Jay Luchs recalled doing leases with tenants for $25 a square foot per month in September 2008. Today rents are around $10 to $12 a square foot per month, Luchs said.

“When the food [tenants] actually sign [leases], probably about a year out from now, you’re going to see a lot of traffic,” predicted Luchs, who is in the midst of trying to bring more eateries to the street after the departure of anchor Newsroom Cafe. “I think the long-term plan is looking good for Robertson. The short term, it’s still in pain.”

It’s a tale of two streets, said CBRE senior vice president Andrew Turf of Robertson. He pointed out the northern portion of the street, part of West Hollywood’s Design District, is doing OK, while south Robertson is ailing.

“I don’t see that portion of the street coming back any time soon,” Turf said. “I think that’s going to be a three- or four-year downward spiral.”

The second outpost of hot downtown eatery Bottega Louie didn’t materialize on Robertson and may have also stalled the street’s comeback, with RKF vice chairman Robert Cohen calling it a setback. Some of the real estate brokerage’s clients were eyeing that area of the street on the basis of the Bottega Louie deal happening, Cohen said. The restaurant was at one time rumored to go into the former Newsroom Cafe space, once frequented by Hollywood A-listers and instead opted to move to Santa Monica Boulevard near Robertson in West Hollywood.

“I don’t think it’s quite bottomed yet,” Cohen said of the street. “I think the street’s going to suffer a bit more pain and closings as leases come up. This street is in dire need of something to kickstart and re-energize it.”

Still, for every concern about Robertson, there’s the opposite viewpoint, with some holding firmly to the belief the street should hardly be ruled out.

Aliza Neidich and Alissa Jacob, cofounders and cochief executive officers of specialty multibrand concept Reservoir, took over the former BCBG store on south Robertson after original plans to open on Sunset Boulevard in Silver Lake fell through. They’re currently on a month-to-month lease and are on the street indefinitely, Neidich said. Although the west side customer isn’t necessarily the same as the east side customer they typically buy for, Reservoir’s seen steady traffic, Neidich reported.

“Overall the street has treated us really well,” she said. “It’s been interesting to see what’s been going on around Robertson because there has been a lot of turnover, a lot of movement with the real estate and the stores going in and out. But I think it’s just leaving an opportunity for different concepts to come in.”

A New York gallery in August is temporarily taking up the former Ralph Lauren space through September to bring the works of artist Bosco Sodi.

Other newcomers to the street include women’s clothing store Therapy, which opened in July, along with The Parlor and evening dress brand Jovani, whose owners looked on Rodeo Drive and Melrose Avenue before selecting Robertson for the company’s more than 3,500-square-foot flagship. The owners and co-chief executive officers Saul and Abraham Maslavi said they wanted a central location that appealed to both locals and tourists.

Peri Arenas, who owns the European boutique Veri Peri at the Parker Palm Springs hotel, recently inked a deal for 2,400 square feet at the former Kitson Men store on north Robertson. “I moved from New York three years ago,” she said. “I remember years ago Robertson being the place to be and then obviously there were so many stores for rent and I thought, you know what? I’m going to bring Robertson back hopefully.”

She’s not the only one with that idea.

Kitson founder Fraser Ross, often credited with helping bring the celebrities and paparazzi to the street with his multibrand store, recently opened a new concept called Kitross and is projecting $7 million in sales for the 12-month period through August. It’s already attracted at least one celebrity in Reese Witherspoon, who was photographed last month on the street carrying a Kitross bag. The store, which sells apparel for men, women and kids, along with accessories and giftable items happens to be in the same spot as the original Kitson. It’s a coming home of sorts and he’s already talking to people about licensing in Asia.

The space is stocked with old favorites, such as Von Dutch hats, amid new brands. Items from Blonde Salad blogger Chiara Ferragni are there, sprinkled in with denim shorts from One Teaspoon, $245 vintage camouflage jackets from A Fine Line that Ross says he can’t keep in stock fast enough, Diesel jeans and Eight & Bob fragrance.

Ross has big ideas and, along with Luchs, held a meeting earlier in the year with William Chun, director of the business team for Los Angeles Mayor Eric Garcetti, to talk about how to bring the street back. Ross didn’t leave much off his wish list, which ranged from two-hour free parking in the structure next to his store to filling the windows of vacant city-owned shops with something — anything — and removing strands of Christmas lights from trees. Calls to the mayor’s press office and Chun were not returned.

“This street’s still in major recovery mode but that could change in a snap with just a couple new deals,” Luchs said.

Artisan roasters Blue Bottle Coffee is in leases at Robertson Plaza, according to Luchs. There are also multiple offers for the former Newsroom Cafe space, where it’s likely a few restaurants could go into the building. Plans are in the works to bring a fitness tenant to the street in the way of a spinning or yoga studio, Luchs added.

Ross remains optimistic, a firm believer in history possibly repeating itself. Lackluster was very much what the street was when he opened Kitson there in 2000, he pointed out.

“It’s the cycle of any main street,” Ross said. “I think the rebirth has just started. When I went there 16 years ago, it was all furniture and antique stores. It’s just in a transition.”