NEW YORK — Robin Kramer sweats the details but never loses sight of the big picture. Designers and retailers may call on her to come up with a visual concept for their stores, but she roams beyond the four walls, scrutinizing a brand’s... 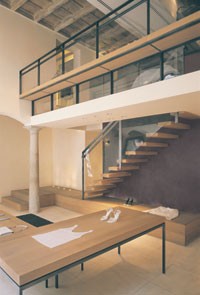 NEW YORK — Robin Kramer sweats the details but never loses sight of the big picture. Designers and retailers may call on her to come up with a visual concept for their stores, but she roams beyond the four walls, scrutinizing a brand’s packaging, advertising and visual display and sometimes even venturing into product development.

“What we really do is integrate all the creative aspects of the brand,” she said. “Sometimes we’re asked to bring in an ad agency after we set the tone. There has to be a completely integrated holistic approach. We talk about merchandising and where products should be in the store and pull in other professionals if necessary.”

Kramer has moved into licensing and helps companies select the right brand extensions. “We just formed a partnership with Richard Meier,” she said, referring to the star architect. “We just signed a license for furniture with Cassina.”

The Wynn in Las Vegas, the new luxury resort, called for more than the usual design services. Kramer conceived of women’s and men’s sportswear boutiques, an apothecary with brands such as Fresh and Santa Maria Novella, a resort store, a children’s store and a cafe. Not only did she develop the retail concepts and select the materials, she said, “We worked closely with the merchant team. We helped them find interesting  products for the stores.”

When Reebok asked Kramer to develop a new women’s retail concept, she started, as she always does, with research. “We did a study of the brand and why it’s relevant,” Kramer says. “Then we distilled it down to the brand’s equities.”

Kramer discovered that women wanted a Reebok store where they could buy athletic shoes as well as a power bar and magazine. So she developed an information component. Editorial walls were built throughout the store for articles, which can be put together with magnets. One month there might be a page about breast cancer, the next, something about nutrition.

JLo’s Kramer-designed Moscow store has a club-style VIP lounge, listening stations and hanging Lucite chairs, custom-made cascading chandeliers and dusty pink marble and plush carpeted floors. Special attention was given to the bathrooms because, “That’s where girls hang out and talk about fashion,” said Kramer, noting that similar stores are planned in Georgia and a second store is opening in Moscow in a mall under the Kremlin.

Kramer, who is celebrating her 10th anniversary in business this year, started her firm with a single employee, her mother, who was the office manager. Her mom is still with her today, but her job has grown along with the 27-person company. Her title is now “operations manager.”

Much about store design has changed in the past decade. “Pre-9/11, it was all about decorating stores and creating big monuments. SoHo had all these stores that might or might not have been right for the area,” Kramer said, referring Madison Avenue brands that opened downtown outposts. “It’s certainly not going to do your brand any good to close.”

Kramer continues to expand her purview, consulting for Craig Robbins, the president of DACRA and mastermind of Miami’s Design District, on the positioning of the neighborhood. “We’re developing it so it will be similar to SoHo,” she said. “We’re working on getting a certain mix and texture between restaurants and stores and galleries.” Already Holly Hunt, Waterworks and Grass restaurant have opened and the Latin Grammys are renting office space in the area.

“Retail extends to so many places,” Kramer said. One brand Kramer hopes will call is American Airlines. “I like the challenge of reinventing a category or type of business,” she said. “The idea of reinventing department stores is exciting. I’d also like to redesign the experience of banking.”