BEVERLY HILLS, Calif. — With its mostly glorious weather, fixation on the body beautiful and wealthy shoppers, the Los Angeles region was a natural choice for a freestanding store for upscale French swimwear and lingerie brand, Eres. 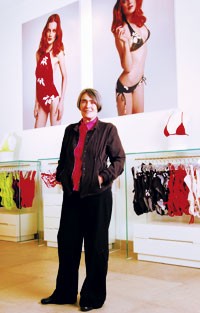 BEVERLY HILLS, Calif. — With its mostly glorious weather, fixation on the body beautiful and wealthy shoppers, the Los Angeles region was a natural choice for a freestanding store for upscale French swimwear and lingerie brand, Eres.

The line has opened its first West Coast boutique — and its fourth in the U.S. — on Rodeo Drive, down the street from names like La Perla and Emporio Armani. Designed by French architect Georges Rabineau, the all-white and light-filled 1,500-square-foot boutique is intended to showcase the delicate underthings and beautifully cut swimwear for which Eres is known.

“The colors and ambience of this store are very similar to our recently renovated Paris flagship,” said Irene Leroux, the brand’s founder, president and designer. “It’s very much part of our new concept.”

That extends to the glass display cases, mirrors inlaid with lights and even the glass cashier desk. The streamlined windows, with their artistically displayed swimwear, drew in customers even while the store was under construction, Leroux said.

“These women are living in a place where the weather is nice, where they are conscious of their bodies and, of course, where they have money, too,’’ she said. “I wouldn’t be surprised if this store becomes our best in the U.S.”

Eres has two freestanding stores in New York — on Madison Avenue and in SoHo — and one in Palm Beach, Fla.  There are also four stores in Paris, one in Saint-Tropez and several shop-in-shops in Japan. The brand is available at some 700 points of sale worldwide, which in the U.S. include Neiman Marcus and Bergdorf Goodman. In Paris, where sales are far less commonplace than in the U.S., women line up to get into the stores once markdowns are announced.

The brand has a certain cult following, despite the relatively high prices.  Predicted hot sellers for spring include maillots given a retro flourish, with ties at the back or held up with a tortoiseshell ring. Colors include purple, coral and chocolate brown. In lingerie, elastic lace bras in shades of lavender and pink are made using French fabrics from Calais and Le Puy, and have a Sixties look. Prices for bras average $245, with panties selling for about $125. Swimwear is priced from $245 to $305, with matching short skirts retailing for $180. Shirts, with slight ruching on the sides, are priced at $340.

“I have to find exactly the right spot, and I’m not sure that we should hurry. A place needs to have a certain fashion culture, and you don’t find that everywhere. We’d rather do it step-by-step.”