A repositioning of the beloved brand is beginning to show positive signs.

Happy. It’s not a word that’s always associated with fashion. So while other brands chase street style and edgy looks, partake in the perennial obsession with the color black and succumb to the Billie Eilish school of baggy clothes, Roller Rabbit wants to corner the market on feel-good, colorful, endorphin-releasing apparel.

“It’s a brand that stands for happiness,” said Andrew Seibert, who in 2017 quietly acquired Roller Rabbit with two investment partners. “Brands are moody or dour. When we took over the brand, we spoke to customers. People talked about the emotion and how happy the brand made them.

“People have Roller Rabbit present at happy, intimate times of their lives,” said Seibert, referring to weddings and matching bathrobes for bridesmaids, to pajamas for newborns. That’s a big white space.”

Seibert, who is chief executive officer of Roller Rabbit and founder and managing director of retail and fashion-focused private equity firm Bricker Holdings, has repositioned the brand, which is known for Indian block prints, resort wear and pajamas covered with whimsical characters, to a lifestyle offering with a strong focus on ready-to-wear.

“The brand has an amazing ethos,” Seibert said. “Roberta [Freymann, founder] built a germ of a brand, which was very product-focused and based on the idea of block printing. The idea of this perpetual vacation lifestyle company was a little hollow. I tried to change the narrative of the brand and change the product focus.”

Seibert reduced the number of categories to 16 from 26, eliminating products, such as beach towels, that weren’t relevant to Roller Rabbit’s target consumer. “One of the things we struggled with was that there were three distinct customers for Roller Rabbit, for ready-to-wear, bedding and pajamas. We tried to give the brand one voice and eliminate the silos.

Roller Rabbit’s logo was refreshed. The original mark, a rabbit ear beside a script letter R styled to look like a second ear, was a vestige of Freymann’s Roberta Roller Rabbit, which launched in 2003. The name Roberta was legally dropped in 2015. The new logo looks like two exclamation points for bunny eyes and ears. 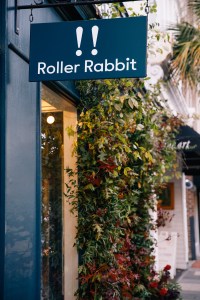 “There’s more to come in Atlanta, Nashville, Charlotte and Austin, Tex.,” Seibert said. “We’re looking at adding more stores in California, and opening in Scottsdale and Denver. Internationally, London makes sense. The colors, patterns and stories would resonate there. There are other places on the continent. To do it as a better value would be a lever to pull. We have a high-level brand recognition internationally. We view retail as a good opportunity.”

“To a degree, I’m bringing back an authenticity from India,” Seibert said. “We work with artisans. All the embroidery is done in India. We also do work in Peru. We have a group of six designers in the corporate office that hand-draw our prints. I’ve hired people from Anthropologie, Mansur Gavriel and Tiffany.”

Seibert introduced more outerwear and knitwear in solid colors and plaids. “Ready-to-wear is now 2.5 times the size of the pajama business. Seibert noted that the brand has 500 wholesale clients. 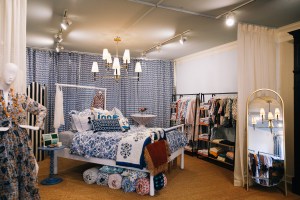 Pajama sales balloon during the holidays. Monkey PJs were sold out of two colors on the web site, and “Ghostbusters” limited-edition loungewear sets were popular. “We do things like double-faced cotton for pajamas,” Seibert said. “Nobody else uses that.” A custom print for J. Crew, called Deerest, “has been phenomenal,” Seibert said.

Bricker Holdings is “looking for other opportunities to increase the portfolio with a similar acquisition,” Seibert said. “Bricker is not a fund. I put up half the money. It’s so deeply personal. My wife is a sales associate at the Greenwich store. She said the customer has noticed the changes. We’re hoping to make her life happier. We still have a way to go.”