The icon of L.A. retail is starting to wind down his business after more than 40 years.

It’s a hot Friday afternoon in Los Angeles, even hotter on the outskirts where fire season is starting to live up to its name, but inside Ron Robinson’s iconic shop, all seems well.

Robinson is in a navy sport coat and a white shirt, slim jeans and sleek navy trainers, chatting with a customer in the apothecary section of his mini-maze of a store. It’s expanded so much since 1978 that the shop feels more like a cozy, shoppable department store than a boutique.

Like the store, which started out as a men’s retailer, the man is surprisingly busy. Phone calls, meetings, his windows of time are getting whittled down to 20 minutes. But he still holds doors open for shoppers, helps them pick out shirts, says hello to his staff, and “goodbye” and “thank you” to everyone who he sees leave. He’s also stopped and greeted by name so often, he seems to scarcely have time to finish a sentence.

You wouldn’t know from watching him work that it’s only a few months from being over. But this pace probably helped him along in his decision to close up his shops (a second location in Santa Monica came just a few years ago) after 41 years.

“The time was just right,” Robinson said. He started to think about closing up about two years ago, and when it came time last year to renew his lease, he knew he “didn’t want to sign on for another five or 10 years.”

“They would have had to make me a really, really good offer, like they’d pay me to stay,” he said, laughing. 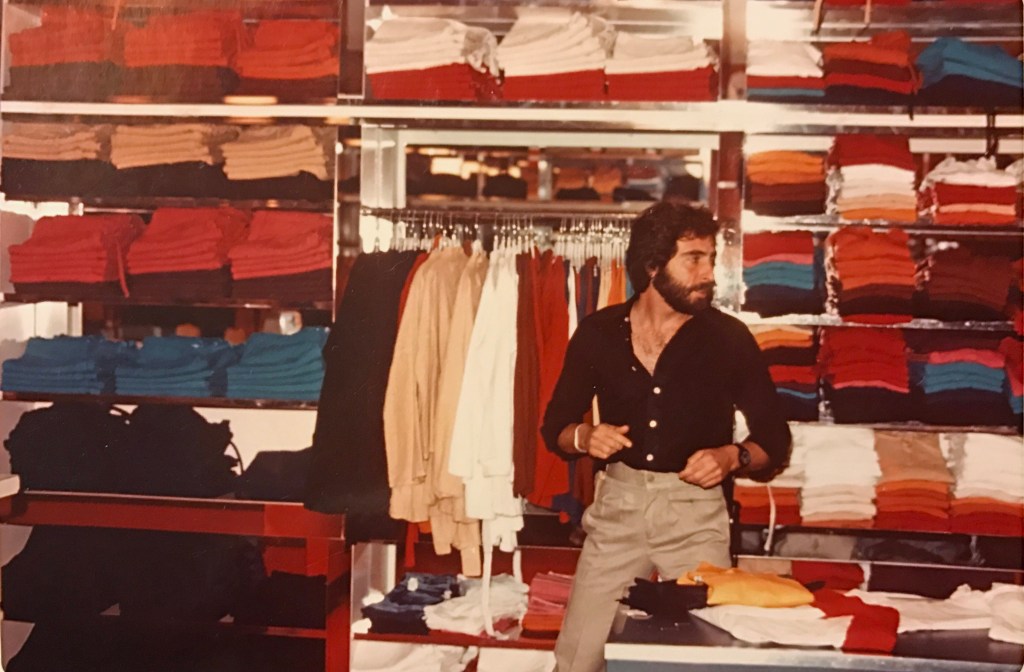 Ron Robinson at the Melrose store in the mid-Seventies.  Courtesy of Ron Robinson

But he insisted that the closing of the shop is not due to any real business concerns. “We’re really going out on top.” He refuses to even use the word “goodbye,” and instead says, “We’re just saying farewell.” The couple of upcoming events he has planned have been wryly dubbed “happy endings.” “You can see the T-shirt now, right?” Robinson joked.

“It is important that people know what this isn’t,” Robinson added. “It isn’t bankruptcy, losing our lease, going out of business, or a relocation sale — this is just the way my journey is unfolding, so let’s enjoy it because it’s a happy ending!”

He’s also not selling the business or handing it off in any way, but simply winding it down. The store in Santa Monica is set to close next month and the main store on Melrose, next to Fred Segal, will close early next year. He did think about selling the name, and says there was a lot of interest, but ultimately the concern over it being sullied outweighed the financial gain.

“What if someone messes it up?”

Overall, Robinson said he’s feeling “really good” about the decision, and is looking forward to being able to spend more time with his family. The most difficult part so far, he said, was telling his staff, many of whom have been with him for well over a decade and some more than two decades.

“They were surprised,” he admitted.

But Robinson isn’t wholly retiring. He’s going to keep his online shop going, but not to the same extent as the retail locations. “If I find something I like, I’ll pop it on there,” he said. He’s also continuing his line of fragrance and apothecary products, Apothia. In fact, he’s set to do another Apothia collection with Missoni, part of which will come out this year.

“I thought I was going to have all this free time next year, and it was going to be so great but…” Robinson said, trailing off when a woman, seemingly a regular-cum-acquaintance, came up to say hello.

Experience Matters: At Ron Robinson, Old World Vibes With a Point of View